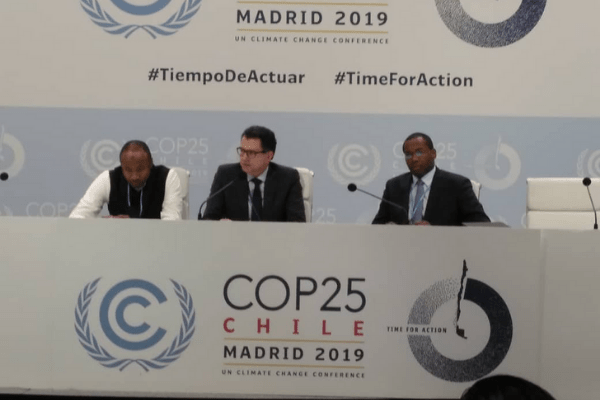 As final negotiations among parties takes place today – the closing day of the Madrid climate change conference, Africa may leave the 25th session of the Conference of the Parties (COP25) without a deal.

Issues such as adaptation, loss and damage and Article 6 are the contentious issues Africa negotiators have locked horns over with other parties from developed countries.

“No deal is better than a bad deal for our people,” said Ambassador Mohammed Nasr, chair of African Group of Negotiators (AGN) at a press briefing today which is the last day of the conference.

“Several items for developing countries did not see any conclusion as we speak,” Nasr said.

Also speaking during the briefing Tongie Gahoma, incoming chair of the AGN said that Africa is ready to continue the negotiations at the 2020 COP taking place in Glasgow, Scotland.

“We are ready to continue these discussions next year. We want to avoid the Kyoto disease,” he said.

“For us, it is important that the work here is for Africa by Africa and our concern is mainly adaptation,” he further said.

Africa accounts for less than 4percent of global carbon emissions and the continent is the most vulnerable in terms of the impact of climate change, the United Nations says.

“Africa is highly impacted by climate change adversity all across and the cost is very high for the governments that are already putting between 2-9 percent of their GDP for adaptation,” Nasr who is also an ambassador in Egypt said.

A UN study says Sub-Saharan Africa would need an estimated climate adaptation finance of around $50bn (£37bn) annually by 2050.

“The overall assessment is not a good situation. There is still no clarity on the number of issues that are dear to Africa,” said Seynu Nafo, former chair of the AGN.

The C-Curve: Rising, flattening or dipping? Oshiomhole; A self-inflicted injury