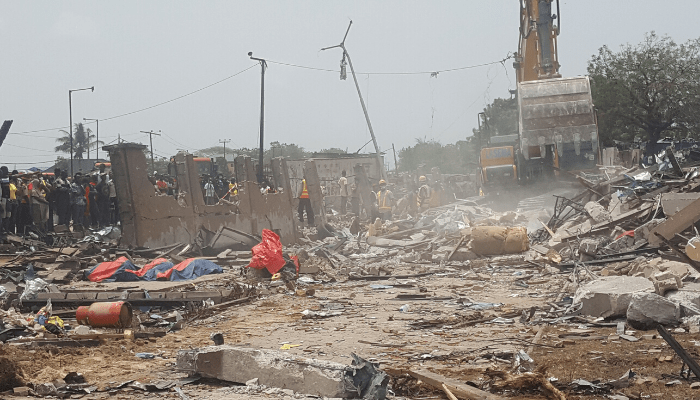 By a pile of shattered pillars and slabs that had rapidly changed from wearing grey to smoky black, Mrs. Ojo stood hands akimbo, desperately calling out Kolawole Ojo, her son. Whether beneath the rubble she anxiously gazed at or from any other heap of ruins around, she wanted an answer to erupt from the familiar voice she had always known. It was 1:14pm on Tuesday and Kolawole, one of the most efficient hands that Bethlehem Girls College (BCG) had on its security team, was not reachable by phone anymore.

“Please help me find him. I want to see his face. I want to know the truth about his condition,” she said.

Her last conversation with him was about 6am on the ill-fated Sunday, three hours before the explosion attributed to disruption of a gas facility. But after the explosion, Kolawole’s phone rang endlessly without a response. By 1:14 pm when three more bodies had been recovered from the evacuation carried out by The Lagos State Emergency Management Agency (LASEMA), there was no shadow of Kolawole. But he was not the only one missing and yet to be identified among the casualties. His colleagues, Geoffrey and Alli were equally still missing and were suspected to be buried under the rubble from the collapse of the giant gate ushering into the catholic school.# 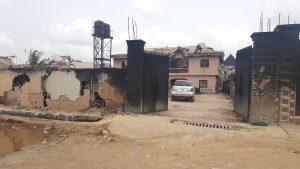 The sudden explosion that ravaged the Abule-ado on Sunday not only left a quiet community with horrid sights similar to images of destruction from war-torn Syria, it was a near collapse of the community that sent shivers into people. The shocking tremor and thunderous strike from the explosion severed many buildings from their foundation with other features transported far beyond reach. There were ignitions splashed around, killing for instance, the owner of Lin-daves Group of Schools, Mr and Mrs ObiJackson, their son who had returned to Nigeria for his wedding next month and their domestic worker, as they set for church that morning.

With the severity of the devastation, the growing evidence of insecurity in the country and a fragile level of trust in government, the majority in the community kicked against the theory of a truck hitting gas cylinders stacked in a gas processing plant as the cause of the explosion, as stated by the Group General Manager, Public Affairs Division, Kennie Obateru, on Sunday. They vehemently held on to the suspicion of bomb explosion targeted at ruining the state. Some other factions saw the explosion as an attempt to dispossess traders of the popular Trade Fair Market, which had its parts ruined by the explosion.

While speculators have frowned at indiscriminate construction of buildings around pipelines, heavy criticisms have trailed the government of Lagos state for approving buildings to be cited within the perimeter of danger. 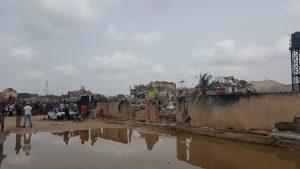 As of Tuesday, three bodies were retrieved from the rubble including that of a cook to a reverend in the Catholic Church that suffered one of the major damages. Chioma, one of the security personnel lost her colleague, Harry, tearfully said “my tight friend Harry, is dead. On Sunday morning when I closed from work, I went to meet her. Her sister is planning to wed and she asked me to come and take her cloth my tailor. We were together until I left around 7am.”

All students of BCG saved When Businessday visited the scene on Tuesday, Tomi Oshin, a teacher at the Bethlehem Girls College confirmed none of the students were lost in the incident, as opposed to widespread view that parents were writhing from the pain of loss. But to verify, some of the parents seen within the premise of the school were questioned, and confirmed that none of them lost their child with the relentless help of Rev. Henrietta Alokha, the Principal of Bethlehem Girls College, Abúlé Ado.

“What saved them was that they were all gathered in the church listening to sermon when the explosion happened. If they had been scattered around their hostels, it would have been another story entirely,” explained the mother of Moji, one of senior secondary school students.

In the school’s refectory, the bread to be baked for breakfast, sliced yam, and fried eggs were sloshed across the huge room, gradually growing into decay. Relief workers from the Catholic Mission and the Red Cross Society were found around trying to gather what was left of the ruined.

Outside the school, officers of the Federal fire service, LASEMA, Lagos State Material Testing Laboratory ( LSTML), the National Emergency Management Agency (NEMA) among others continued the search for bodies.

Wale Olabiyi, one of the landlords, who controls about 10 flats in the area lamented, saying “We woke up to a black Sunday. It is hard for me to believe. We want the government to do their investigation and come up with the report.”

“We are landlords here, we have our lives here and properties and everything that we live for here. So we want justice done. God will judge. I have been here for more than 10 years.” 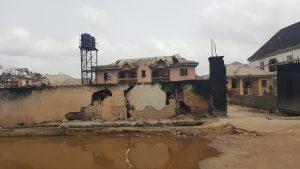 Another resident, Oluwagbemi Gabriel, a building contractor in the area appealed to the government to encourage all the landlords in the environment to let everyone leave the buildings for now. “From now till weekend, most buildings could collapse anytime,” he said.

All buildings encircling the heart of the devastating explosion at Abule-ado will be subjected to integrity test from Wednesday to ascertain their fitness for living and avoid further loss of lives, Afolabi Tajudeen, Lagos State Material Testing Laboratory (LSTML) General Manager said on Tuesday.

Following the wreckage that the explosion left on the environment, the manager said the integrity of all buildings in the surrounding was already compromised, whether in cases with partial destruction or complete dilapidation.

“We will start the integrity test tomorrow. We can’t say how long it will take but we will make it as fast as possible in order to submit a preliminary report,” he told Businessday during a visit to the scene.

“The magnitude of the damage is huge and has multifarious effect. From what we see, most of the houses can’t stand the test of time. We need to still come and subject them to non-destructive integrity test for all the houses because of the tremor. The explosion has shaken the soil and affected the foundation of the building.”

The agency could not give certain figures of structures affected as its officer were still enumerating but said the even the best quality of material would have been ruptured from the explosion.

Speaking on the opportunities that the state failed to explore in averting the incident, Tajudeen said people should observe appropriate distance from pipeline assets under building code while the government should avoid approving buildings that fail to make the observation.

“We could have prevented this incidence if the setback expected from a pipeline is observed. For a pipeline, no house should be built 50 metres close to it. We advocate 100 metres so that after an explosion like this, we won’t have this kind of damage,” he said.

Wike says NDDC has failed to deliver on regional projects

LEFT TO SUFFER (IV): Reporter’s Diary: A Journalist’s Self-Immersion In The Pains…

LEFT TO SUFFER (III): The Woman Who Lost 14 Children For Refusing To ‘Marry’ Boko…