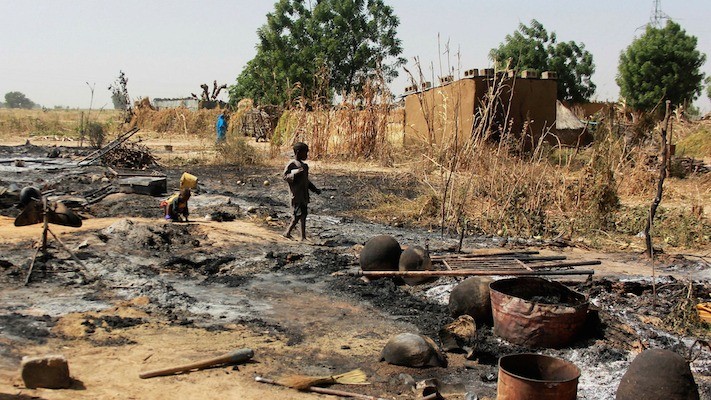 If half of the time devoted to meetings on security at the Presidential Villa were focused on economy-related sessions, Nigeria would not be rated as the world poverty headquarters.

Yet, despite the resources and enormous time spent on such security meetings, insecurity has remained Nigeria’s worst nightmare.

Considering the high rate of insecurity across the country, it is disheartening to count the number of meetings President Muhammadu Buhari has held on the subject matter in the last six years of his administration.

There is hardly any month without Mr. President meeting governors, security chiefs, members of the National Assembly or even diplomatic envoys on security.

According to a source at the Presidential Villa, apart from the month of Ramadan and when the president travels for medical checks abroad, there is no month the president has not held at least 10 meetings on security in the last six years.

The source noted that the meetings are increasing now as all governors are worried over the escalating level of insecurity and even attacks on their lives.

From Babagana Zulum, governor of Borno State, Samuel Ortom, governor of Benue State, Hope Uzodinma of Imo State, Darius Ishaku of Taraba State, Nasir El-Rufai of Kaduna, Dave Umahi of Ebonyi to others, the cry has been the same.

Observers have also noticed that these days, most Federal Executive Council meetings on Wednesdays have been turned into security meetings as insecurity has always been the major topic of discussion.

Juan Elbadri, representative of an international reality TV franchise in West Africa, who was told Cross River, is the most peaceful state in the country and appropriate venue for an upcoming American reality TV show in Nigeria, has had to reschedule appointments with the state governor severally on ground that the governor just left or has been in Abuja for emergency meetings, so also many contractors are experiencing with governors in other states, apart from Benue and Rivers governors whose faces are rarely seen for obvious reasons.

In his PhD research work in 2018 titled ‘Africa and her high cost of governance,’ Abidemi Oluwole, who is now based in Kenya where he works with UNIDO, noted that African leaders hold more meetings than the actual work, and that the meetings are budgeted for and most hold even where they are not necessary in order to spend the budget and get it even increased in the next budgetary allocation.

Probably, Oluwole’s summation is the reason the Nigerian government has held over 720 meetings in six years on security (going by at least 10 meetings a month) with little or nothing to show in the fight against insecurity.

However, despite the over approximately ‘720’ meetings, Nigeria has been ranking the most in insecurity and other negative indices.

Worst still, for six years, this administration has been holding meetings on security, budgeting huge funds and spending them with little result to show for the efforts.

It is also happening in the face of a former army general who became the first opposition candidate to win a presidential election in Nigeria, who also vowed to crush Boko Haram and other criminal elements within three months and recover all the territories it had seized.

Today, insecurity has escalated beyond imagination, with Boko Haram terrorist group taking more towns, hoisting their flags, bandits on rampage and kidnappers emboldened to ask for ransom and even refusing to negotiate with the government.

“What do they discuss at the meetings that less action is seen? If you blame the former president for not being proactive in the fight against insurgency and people under his watch misappropriating funds budgeted for security, now the ball has been on your court for six years and little has been achieved. Who is deceiving who?” Yohana Jacob, a retired security personnel, who now lectures in a northeast university, said.

According to Nigeria Security Tracker, the US think tank Council on Foreign Relations, in the last five years under President Buhari, the defence budget continued to be high with N878.4 billion and N840.56 billion earmarked for the military in 2020 and 2021 respectively.

But observers think that if the time the president spent on the over 720 meetings on security and the huge funds spent so far were directed to the economy, the Nigerian economy would not have been in the mess it is today.

With a volatile exchange rate of over N500 to $1, unstable global oil price, 15.97 percent rate of inflation, 32.5 percent rate of unemployment and more than half of the population below poverty line and life expectancy falling every day, the country is truly in big trouble.

But the undue attention given to security has made the economy decline more with the gross domestic product (GDP) falling as many businesses, especially small-scale entrepreneurs, which are the fulcrum of economic development, are shutting down every day due to the impact of the harsh economy.

“I don’t think the president’s economic team is advising him well or he is not listening to them. Many surveys have confirmed that it is unemployment that is fueling insecurity, why not fix the economy and compare results”, Hilary Ebierima, an economist, said.

Regrettably, observers think the present administration will still focus on security in the remaining two years of its tenure, despite being unable to fix it in the last six years.

Nigerians should not expect miracles in the remaining two years of this administration as its focus on election campaign in 2015 and 2019, and till now, has been and will continue to be security.

For them, “the meetings will even increase, still with little result”.

Ayuba Gwantu, a northern-based political commentator, accused the Federal Government of abandoning other sectors, and focusing only on insecurity.

“I think nothing is going on in government, except insecurity. If Buhari and his people are really fighting insecurity the way they should, the thing would have reduced by now. But like we have seen, this administration has neglected other sectors; education and health are suffering. I don’t think he has done enough in these areas. Of course, he has been allocating huge sums of money to fight insecurity in the last few years, but are we seeing the result?” Gwantu said.

According to him, “The government should think of other means of tackling insecurity. You cannot just be fighting without being strategic and tactical which they appear not to be. For example; checking school dropout, unemployment, Almajiri which is higher in the North than any other region in the sub-region, perhaps, should be part of the plan. So, it is not about just fighting; what is being done about the Almajiri; the school dropout?

“I think the government has misplaced priorities and they don’t understand how it should go. It is not only through the war front that you can fight insecurity; you can do that through school. That is what Jonathan did; building Amajiri schools but this government doesn’t get that.”

Remi Sonaiya, a former presidential candidate on the platform of KOWA party, believes that with the Covid-19, government has shown some measure of capacity in the health sector.

“Well, I think health has received considerable attention from this administration too, especially with this Covid-19 period. Agriculture has also received attention. There is a lot of rice being produced locally now.

“Security is the biggest thing; I mean everybody wants to be safe, free, and secure. Maybe, what we could say is that with the entire amount being spent, are we getting the corresponding returns and results? That is a totally different thing entirely.”

“I think it’s wrong to say that President Muhammadu Buhari is paying disproportionate attention to the menace of insecurity to the detriment of other sectors. He is paying no sufficient attention to any sector of our national life except concentrating so much on protecting killer herders and being antagonistic to the overdue reform of banning open grazing as being canvassed by the Southern governors and majority of responsible Nigerians,” Adebayo said.

According to him, “President Buhari cannot fight insecurity because his policies, body and vocal languages encourage insecurity in the land.”

“Remember that before he became president, General Buhari declared that any attack on Boko Haram would be considered an attack on the entire North. By that, he proclaimed that he was in support of Boko Haram’s terrorism. So, nobody should expect him as president to wholeheartedly fight those he openly declared support for. He can’t do it!

“Furthermore, the solid backing the president has been giving to the killer herders is almost legendary. He is on record as admonishing Governor Samuel Ortom of Benue State to be the brother’s keeper (those killing his people). When the governor refused to accommodate the killer herders terrorising and massacring his people, the governor was frustrated out of the ruling party and almost impeached; all because he was fighting to protect the people who elected him into office.”

The CUPP spokesperson further said that “The president has never openly condemned killer herders the same way he has been so brutally critical of IPOB and other self-determination groups. He is not on record as having condemned the mass murders and rapes being committed by the killer Fulani marauders specifically. He protects them and enables them. That’s all his government stands for.