The Kidnap-for-ransom business is fuelling an abduction epidemic in Nigeria with many persons killed and kidnapped in the first half of 2021.

According to data from Nigeria Security Tracker (NST), there have been 2,943 abduction cases and 5800 death cases due to insecurity between January and June 2021.

This means about 16 persons were abducted per day while 32 persons were killed per day within the period. However, these are only cases that were reported, the numbers are probably larger.

Asides from dealing with the economic hardship of rising unemployment, poverty, and inflation, Nigerians have to pay for leaving their houses as huge ransoms are demanded by kidnappers.

According to a report by SB Morgen (SBM) Intelligence, a Lagos-based political risk analysis firm, an estimated N10 billion have been demanded by Kidnappers ($19.96 million) in the first six months of the year.

Nearly 1000 students have been taken from schools in mass abductions since December, according to the United Nations. This means about 33 percent of kidnapped people in the first half of the year are school children.

In the latest wave of mass abductions targeting schoolchildren, gunmen kidnapped 140 students from a boarding school in northwestern Nigeria.

This only adds to the long list of other security troubles in the country, including violence in the north stirred by Fulani herdsmen, bandits, and the scourge of ritual killings in Nigeria.

More people have been kidnapped from the North West

From the data, the six geo-political zones in Nigeria all recorded kidnap or abduction cases within the first six months of the year. The North West had the highest cases with 1,405 persons, 942 in the North Central, 210 in the North East, 169 in the South West, 140 in the South-South, while South East recorded the lowest number of people kidnapped, 77. In total, 2,557 people were abducted in the North and 386 in the South. 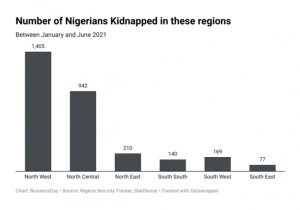 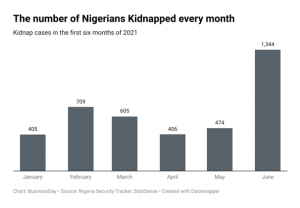 Nigeria recorded the most deaths in May

While some Nigerians were lucky to be released after abductions, others did not make it out alive, and others have died due to violence caused by Boko Haram terrorists, Fulani herders and ritualists with 5800 persons were killed in the first six months of the year. This means on average, 32 persons were killed daily within the period. 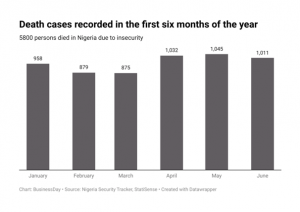 Niger, Zamfara and Kaduna have the most Kidnap cases 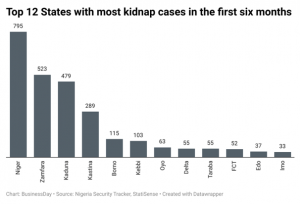 States that are hotbeds for deaths and kidnap

The NST also reported top 7 hotbeds of deaths and abductions in the first half of the year. 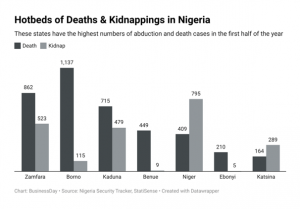