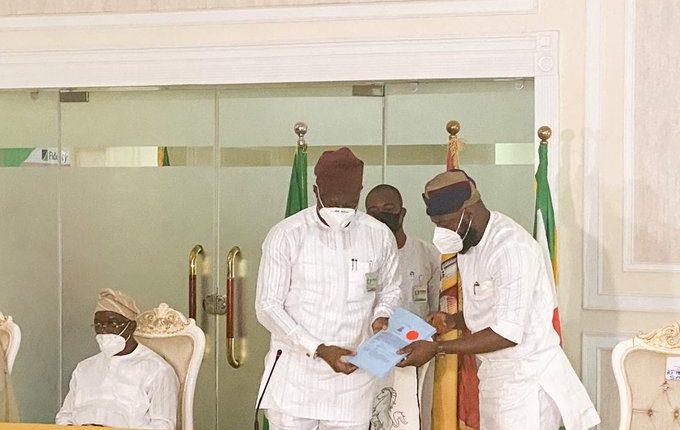 The present administration’s determination to fix the huge infrastructure deficit in the state and get the state on the right track for economic growth was behind the move to secure loans that target key infrastructure, Governor, Seyi Makinde, explained on Wednesday

The Oyo state governor added that the problem with loans is not in taking them, but in the way, they are utilised, noting that with the extant economic reality in the state, it would be difficult for the state to get out of its infrastructure crisis and be well-placed to attract investments, without taking loans targeted at developing key infrastructure.

Speaking during the signing of the reviewed 2020 Budget from N213 Billion to N174 Billion into law, he explained that in the revised 2020 budget, N65.2 Billion has been earmarked for capital projects while N108.9 Billion is for recurrent expenditure, stating that the state plans to pay a huge chunk of its recurrent expenditure through allocations from the federation account and the state’s internally generated revenue.
A statement by the Chief Press Secretary to the governor, Taiwo Adisa, indicated that the governor appreciated members of the Oyo State House of Assembly for reviewing the revised budget proposal in a timely manner and for approving the downward review.

According to him,  it is heartening that the three arms of government have continued to work harmoniously for the good of the people of Oyo State.

The budget signing ceremony, which took place at the Government House, Agodi, Ibadan, was witnessed by the Deputy Governor, Rauf Olaniyan; Speaker of the Oyo State House of Assembly, other top government functionaries and some lawmakers.

Speaking shortly after signing the reviewed budget, Governor Makinde maintained that the reason for the review was due to economic meltdown, crash in oil prices, and effect of the COVID-19 pandemic, which affected the economy of the state.

Makinde reiterated his administration’s commitment to ensure optimum performance of the budget, noting that the state will ensure that the 2020 revised budget is adequately funded by aiming at 70 percent performance.

“The reason for this latest revision is apparent to all. The economic meltdown we are experiencing, occasioned by the crash in oil prices, coupled with the COVID-19 pandemic, has greatly affected our state’s ability to stick with the original budget.

“So, after the review, which we submitted to the Oyo State House of Assembly, it was agreed that we should effect an 18.3 percent downward review of the budget, from N213 Billion to N174 Billion.

“It is this revised budget that I am signing today. As I sign this revised budget, it is a good time to reflect on one issue that has plagued our budget implementation over the years – the issue of poor budget performance.
“We make robust presentations of plans that mostly end on paper because the funds are not available to implement them.

“When you have an annual budget performance of about 30 percent, you will understand why we keep having stagnation in economic growth. Or how else will you explain an IGR average of about N1.8 billion in the past four years?”

He maintained that the reason Oyo State continued to be referred to as a civil service state is that it failed, over the years, to take the needed action to boost its economy, stating that his administration is ready to make daring and ambitious efforts to reposition the state economically.

“So, we have taken some steps to ensure that the 2020 revised budget is adequately funded. As I said at the signing of the initial budget, we are aiming for a minimum of 70 percent performance,” Governor Makinde said, adding that the steps taken by the government are to ensure that loans taken are used to fund priority capital projects.

He said: “One of the steps we have taken is to ensure that loans taken are used to fund priority capital projects.

“Another thing we are doing is using an Alternative Project Funding Approach to carry out key priority projects. This will be used for the twenty-one-kilometers Airport – Ajia – New Ife Express Road with a spur to Amuloko in Ibadan and few other projects.

“What the alternative approach entails is that the contractor will fund the project and the Oyo State Government will pay for the project over thirty months. “I have seen some comments about the cost of the Airport Road. There is no basis for the comparison between Airport Road and the Moniya-Iseyin road. Unlike the Moniya-Iseyin road, the Airport road will contain hydraulic structures.”

Makinde also used the occasion to clear the air on the planned Oyo State Prosperity Bond, noting that though the government is aware that floating the bond is an ambitious move, it is a bold step that has to be taken for the development of the state.

“Let me use this opportunity to talk about the N100 Billion bond, also known as the Oyo Prosperity Bond, which was recently proposed and approved by the Oyo State Executive Council. There is no arguing that floating this bond is an ambitious move. But I want to believe that we were voted into office to take bold steps in developing our economy.

“The facts before us are clear. Our state has huge infrastructural deficits. If those deficits are not addressed, it means we will be maintaining the status quo. Any person with sound financial knowledge will tell you that the only way to get out of this cycle of poverty is through massive investment in infrastructure.

“As I have always said, the problem with loans is not in taking them, but in the way, loans are utilised. Oyo State cannot get out of its infrastructural deficit without taking loans targeted at developing key infrastructure. “For example, we are targeting economically strategic roads such as the fifty-kilometers Iseyin-Ogbomoso road and the Ibadan Circular Road. We are also giving attention to the health sector by either constructing or upgrading one public hospital in each of the three senatorial districts of the state. In the transport sector, we are focused on building the Ibadan Dry Port and rail corridor and upgrading the Ibadan Airport.

“Oyo State cannot attract investments into our economy without showing that we are worthy of these investments. Investors will go to Lagos and even our neighbouring Ogun State if we continue running our economy with the same level of unseriousness that the state has come to be known for.

“Tell me, what excuse do we have for not making it into the list of top ten economies in Nigeria? How can we, despite being in these dire conditions, not recognize the urgency of growing our economy?

“I took an oath to lift Oyo State from poverty to prosperity using our Roadmap to Accelerated Development of Oyo State 2019-2023. I am determined to keep my word. Every step we have taken as an administration since our being sworn in on May 29, 2019, to date is geared towards ensuring that every promise made will translate to promises kept. I pledge to continue carrying you along as we make the best decisions for the overall good of the people of Oyo State.”

Anatomy of corruption in Nigeria

Dealing with compound words in English