Food now consumes about 101 percent of the average wages of Nigerians, a report by the Institute of Development Studies has shown.

According to the report, Nigeria now ranks second globally where citizens spend almost all their income on food, ranking only behind Syria where 177 percent of income is spent on food.

With the high inflation rate and no real increases in income levels, most Nigerians can barely afford to save or invest as food gulps almost all their cash.

The trend explains why poverty is deepening in Nigeria which became the poverty capital of the world in 2018.

While citizens in Syria, Nigeria and Ethiopia are spending a large portion of their income on food, citizens of Qatar, the United Kingdom, United States, and New Zealand spend just 8 percent, 9 percent, 10 percent and 11 percent respectively.

For Nigeria, this is an obvious sign of a worsening food crisis which is deepening hunger and dragging more people to poverty.

According to the 2019 consumption expenditure by the National Bureau of Statistics (NBS), the total household expenditure in Nigeria is N40 trillion out of which N22.7 trillion is spent on food alone. 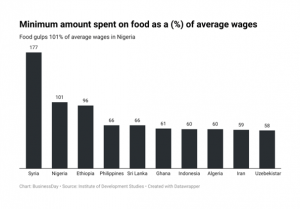 Although inflation appears to have slowed for three straight months in June, but at 17.75 percent, there is no relief for Nigerians as food prices continue to rise.

According to the National Bureau of Statistics (NBS), food inflation rose to 21.83 percent in June 2021 from 15.18 percent at the same time last year. Food prices accounted for the over 60 percent increase in headline inflation between 2020 and 2021.

The soaring food prices have been a result of the worsening farmer-herder clashes, weakening currency and shortage of dollars for foreign exchange.

There are projections that Nigeria’s food crisis and poverty will get worse if inflation remains high.

The Food and Agriculture Organisation (FAO) of the United Nations in a report on food security and nutrition analysis released in 2020 has predicted that about 13.8 million people in Nigeria will be facing an acute food shortage crisis between June and August 2021.

It also said the number could grow to about 14 million if measures are not taken in time to avert the hunger crisis.

Another report by the Global Network against Food Crisis has also predicted that an estimated 12.80 million Nigerians across 16 states and the Federal Capital Territory (FCT) may be facing their worst food crisis ever in 2021. 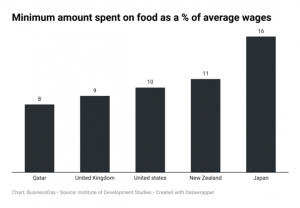 Already, Nigeria’s surging inflation rate has pushed 7 million Nigerians into poverty, the World Bank said in its recent report on Nigeria. The Bank estimates that about 18 percent of adults did not eat for an entire day compared to 6 percent recorded before the pandemic, a sign of worsening poverty.

The living cost in Nigeria makes it difficult to live a decent life amid high unemployment and poverty rate.

Nigeria’s unemployment rate rose to 33.3 percent in Q4 2020, a record high and the second highest in the world.

Nigeria’s strength should now be in non-oil export –Temidayo