13 million Nigerians are at risk of acute food insecurity 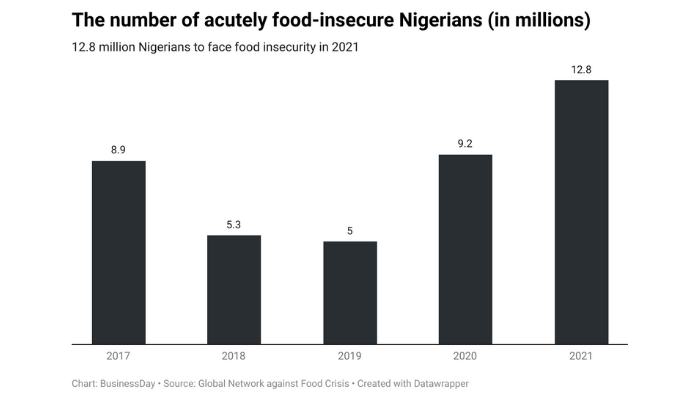 An estimated 12.80 million Nigerians across 16 states and the Federal Capital Territory (FCT) may be facing their worst food crises in 2021, a global report on food crises shows.

The projection which is a 39 percent increase compared to 2020 puts Africa’s biggest economy amongst the six countries in Africa with the worse food crises.

Acute food insecurity, the inability of a person to consume the daily recommended quantity and quality of food means that the living standards of Nigerians could further worsen, leading to an increase in poverty.

“If there is no adequate food supply, prices will jump significantly, which will reduce the ability of people to afford quality meals that will be needed to give them nutritional growth. And a further consequence of that is a decline in the standard of living and people will become poorer,” Ayorinde Akinloye, an analyst at United Capital Plc said.

Damilola Adewale, a Lagos-based economic analyst said the numbers are not over-exaggerated given the prevailing conditions in the food production sector.

“These challenges significantly weighed on food production, which is currently underwhelming, even as food prices remain elevated,” Adewale further said.

In the last few years, food prices have been pressured, pushing the country towards a food crisis. According to the National Bureau of Statistics, food inflation rose to 21.83 percent in June 2021 from 15.18 percent in the same period of last year.

Recently, the World Bank noted that the country’s surging inflation rate had pushed 7 million Nigerians into poverty. According to the bank, before inflation started rising steadily, there were 82.9 million poor Nigerians but the number has risen to 90.1 million.

Also, SBM Intelligence report stated that Nigeria could face the risk of famine due to the high food prices in the face of dwindling income.