Sales at some of Nigeria’s biggest consumer goods firms are holding up despite rising inflation and weak purchasing power, the only problem is their customers are taking more time to pay for what they buy.

This is after the combined trade receivables of nine publicly-listed consumer goods firms, analysed by BusinessDay, increased by 98 percent in the first half (H1) of 2022.

Further findings showed these firms aggregate trade receivables, or services on credit, totaled N285.6 billion in the first half of 2022, up from N144.2 billion in the same period the previous year.

Trade receivable is the amount a company has billed to its customer for selling its goods or supplying the services for which the amount has not been paid yet by the customer.

A company’s trade receivables will increase at the time of the sale if it sells goods (and/or services) and permits its customers to pay at a later time. 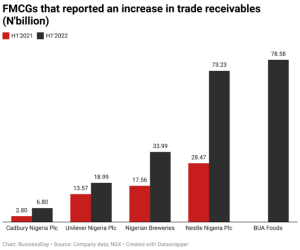 Nestle Nigeria plc led the pack with the highest yearly growth in trade receivables by 157 percent, and Cadbury Nigeria Plc followed closely recording an increase of 142.86 percent in the first half of 2022.

Ayodeji Ajilore, an investment research analyst with ARM Securities explained that the surge in receivables across the board could have been an offshoot of upward price adjustments.

“We believe in the case where prices are adjusted upward like it has been for the most part so far in 2022, customers (wholesalers) are prone to getting credits on higher unit prices which makes for elevated receivables,” Ajilore said.

For Tajudeen Ibrahim, director of research and strategy, ChapelHill Denham, “if receivables and revenue are rising simultaneously, it means that these companies are operating flexible credit policies which allows them to grow their revenue in the period”.

He added, “However, it also means that these firms need to have a more stringent credit policy in place to keep receivables under control.”

Other experts noted that the rising pain of Nigeria’s inflation rate is having a substantial influence on the cost of firms’ raw materials and operations cost.

According to data by the National Bureau of Statistics, Nigeria’s headline inflation hit a 17-year high of 20.52 percent in August 2022 from 19.64 percent in July. 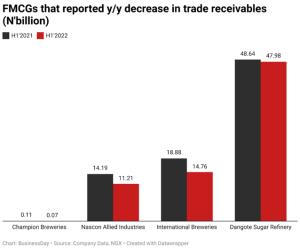 Ibrahim further noted that an increase in trade receivables will have a significant impact on firm’s working capital as money that should be used in the day-to-day running of the business would be constrained, and this would have an upward effect on payables reported by the companies.

Working capital is the amount of available capital that a company can readily use for day-to-day operations. It represents a company’s liquidity, operational efficiency, and short-term financial health.

“If a firm manages its receivables well, it can improve current assets, which boosts working capital. On the other hand, if the company has too many receivables, it can increase costs by preventing access to money, which could lead to a loss of both working capital and liquidity,” Ibrahim said.

International Breweries followed suit with a 21.8 percent decline in trade receivables which amounted to N14.76 billion in the first half of 2022 as against N18.88 billion in the corresponding period of last year.

Nascon Allied industries’ trade receivables were down by 21 percent in the first half of 2022 amounting to N11.21 billion from N14.19 billion in the same period of 2021.