President Muhammadu Buhari, in an interview with Bloomberg published on Tuesday, said Nigeria is better off now than when he assumed office in 2015.

The 79-year-old pointed to increased investments in infrastructure, recovery of stolen funds and improved security as key achievements that have helped reshape Africa’s largest economy.

“We leave Nigeria in a far better place than we found it,” Buhari said.

However, economic indicators and the reality on the ground point to the contrary.

First, it was during his time that Nigeria experienced two recessions (2016 and 2020) in a space of five years. 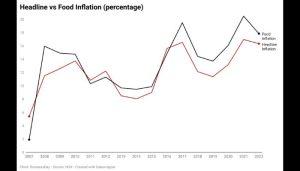 Basic measures such as the inflation rate (headline and food) show that the purchasing power of Nigerians has reduced during his administration.

Headline inflation accelerated to 17.70 percent in May while food inflation rose to 19.50 percent, from 9.01 percent and 9.89 percent on average in 2015, according to data from the National Bureau of Statistics (NBS). 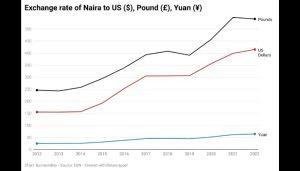 The exchange rates of the nation’s currency, naira, to major international currencies such as the US dollar, British pound sterling, and the Chinese yuan indicate that it is more expensive to carry out international transactions such as the importation of raw materials and other essential items.

The naira has considerably depreciated against those aforementioned currencies. The naira has depreciated from N192.64/$ in 2015 to N415.38/$ in 2022, according to the Central Bank of Nigeria.

The manufacturing sector is a major unit within the economy that bears the brunt of the persistent devaluation of the naira.

One of the challenges manufacturers face when naira depreciates is that it increases their operational costs, and examples abound of firms that have gone under because they did not have the financial leverage to remain as a going concern. 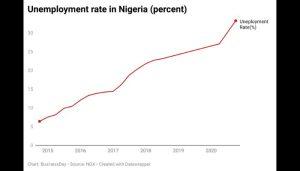 The unemployment rate was about 8 percent when Buhari became the president in June 2015. It surged to 33 percent in the fourth quarter of 2020, according to the latest data from the NBS.

In addition, it was under his watch that Nigeria became the poverty capital of the world. The World Bank recently warned that the rising inflation in the country will push an additional 15 million more Nigerians into poverty. 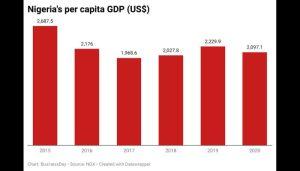 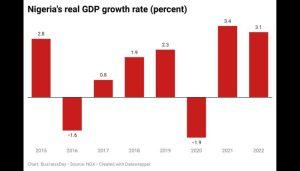 With economic growth still fragile since 2020, the metric would have reduced further.

Nigeria Eurobonds near junk, shut out of debt market