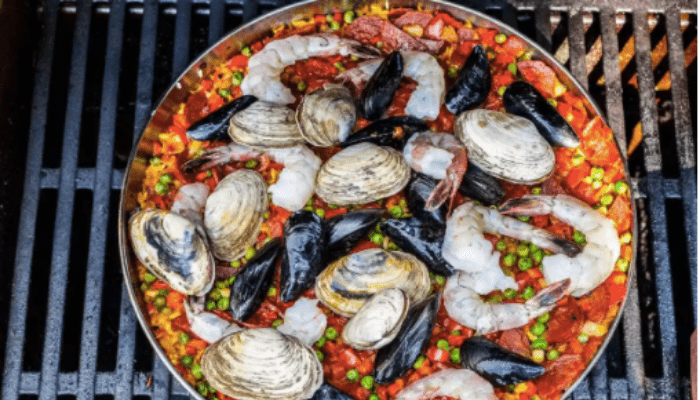 The origins of paella are ancient, rooted in the area around Valencia, Spain near the Albufera Lagoon, where both fishing and rice growing dominated the region for centuries.

Paella was the food of farm workers who cooked dishes of rice over wood fires, embellished with whatever ingredients they could find.

The dish is named for the wide, shallow pan in which the paella is cooked. The word “paella” is from a Valencian dialect meaning “pan,” probably derived from the Latin word “patella” for pan. 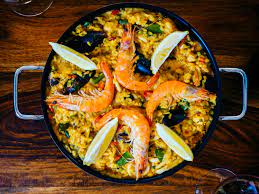 Instructions
Preheat the grill:
Heat a gas grill to medium-high heat (375oF), or light a charcoal grill and let burn until the charcoal is covered with gray ash.

Steep the saffron:In a saucepan over medium heat, bring the stock to a boil. Add the saffron and salt. Turn off the heat and let the saffron steep for at least 15 minutes. Taste and add more salt, if needed.

Cook the sofrito base: In a 12- to 14-inch stainless steel skillet or cast iron pan, heat the oil over medium heat on top of the stove. Add the onion and red pepper, and cook for 5 to 7 minutes, or until the onion is translucent. Stir in the garlic and chorizo.

Assemble the ingredients by the grill:
On a table next to the grill, set the skillet with the sofrito, the rice, tomatoes, infused stock, salt, peas, shrimp, mussels, and clams.

Begin cooking the paella:
Set the skillet with the sofrito on the grill. Add the rice, and cook, stirring often, for 4 to 5 minutes, or until the rice is coated with oil and lightly toasted.

Stir in the stock, tomatoes, and peas. Taste for seasoning and add more salt, if you like.

Add the seafood: Nestle the mussels and clams into the rice with the hinge sides up so they release their juices into the rice. Arrange the shrimp around the shellfish.

Cover the pan with foil, close the grill and cook for 6 to 10 minutes longer (depending on the heat of your grill), or until the rice and shrimp are both cooked through and the mussels and clams are open. (Discard any shellfish that remain tightly shut once everything else is cooked.)

Check to see if the bottom is browned:Slip a spatula under the rice and check to see if you have achieved the elusive golden brown socarrat. If not, set the pan over the heat, uncovered, for a few minutes to lightly caramelize the bottom.

Sprinkle with parsley and bring the whole pan to the table for serving.