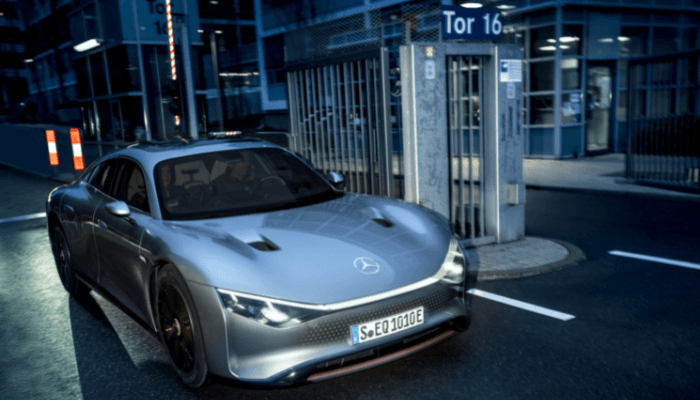 Few vehicle manufacturers have been as historically creative as Mercedes-Benz, which should come as no surprise given the fact that Carl Benz invented the automobile in 1886.

The automobile brand even invented the first electric vehicle in 1906 (the Mercédès Mixte), as well as many of the features that are now found in practically every automobile on the road (four-wheel independent suspension, safety crumple zones, antilock brakes, etc.).

As we enter the most transformational moment in automotive history, with electrification and self-driving vehicles on the horizon, Mercedes-Benz has set a pace of what is to come: the Vision EQXX concept vehicle.

Normally, concept cars are rarely functional vehicles and are frequently just recommendations for where a car manufacturer might be going in the future.

The Vision EQXX, on the other hand, is a whole different story, an electric car developed to travel as far as 620 miles on a single charge.

The Mercedes-Benz Vision EQXX concept car made its debut in January with a claimed range of 621 miles (or 1,000 kilometers) on a single charge. This figure was derived from the company’s original objective, which was to develop an electric vehicle with a power consumption of less than 10 kilowatt-hours of energy per 100 kilometers (6.2 miles per 100 kWh).

The ultra-aerodynamic EQXX was able to complete the journey from Mercedes’ Electrical Software Hub in Sindelfingen, Germany to the Mediterranean community of Cassis, France on a single charge while consuming only 8.7 kWh per 100 kilometers.

This was accomplished while driving the 628 miles (1,008 km) distance between the two locations.
At the end of the trip, the car indicated that it still had another 13 percent or so of its battery life left, which is equivalent to approximately 80 further miles of driving range.

It is highly possible that the advanced features seen in the Mercedes-Benz Vision EQXX will eventually make their way into the brand’s more mainstream vehicles, according to motor1.com

Vision EQXX was created to accomplish this goal as well as to demonstrate the most recent features and advancements that we can expect to see in production vehicles in the near future is on display.

Even more impressive was the company’s commitment to meeting a self-imposed deadline. Mercedes set a time limit of 18 months for the design and construction of the car.

On top of that, lead designer Gordon Wagener was adamant that it seem like a real car, not some impractical wing-shaped freak like the previous model.

Shape and weight are important considerations.
As a whole, the Vision EQXX is a well-designed sedan with an appealing rounded-over form that belies its aerodynamically slippery nature. Some of the angles at the rear of the long tapering tail are a little odd, but there’s also some beauty in the purpose of this design.

The coefficient of drag (Cd) is a measure of aerodynamic efficiency, with cars commonly scoring between 0.25 and 0.30 Cd on the drag scale (the lower the number, the better). SUVs can have Cd values ranging from 0.35 to 0.45.

Until recently, achieving the 0.20 Cd threshold appeared to be an ambitious goal that would result in a slew of atypical shapes and design. Having said that, Mercedes-Benz was successful in accomplishing its goal with the EQS sedan, which is already on the road.
The goal for the EQXX was to beat that amazing figure, and because to some innovative engineering, including an extended rear diffuser, the manufacturer was able to achieve an unheard-of 0.17 coefficient of drag.

When it comes to efficiency, weight is another factor to consider, which is why the EQXX began on a crash diet right away. Because of the use of lightweight materials and novel prototyping technologies, the vehicle’s weight was reduced to 3,858 pounds, which many would believe unfeasible for an electric vehicle. That’s especially astounding when you consider that the battery pack itself, which has a capacity of less than 100 kWh yet weighs more than 1,000 pounds, is quite modest.

Putting the Vision EQXX through its paces
It is uncommon to come across a concept car that is fully working. Getting to take a trip in one is even more difficult to come by, yet that is exactly what we did in Nice, France, according to edmund.com.
Inside, the design is boldly futuristic, with organic, bone-like aesthetic components that are reminiscent of similar lightweight structural sections found in the chassis.

A single 8K touchscreen display spans the full width of the dashboard, and it is the focal point of the interior. Also present is a fully functional entertainment system with a slew of features and buttons to push. It’s an impressive demonstration, and we’re confident that we’ll see some of these features in future production vehicles.

Even though it only has 201 horsepower available, the Vision EQXX is a fairly speedy vehicle, and because it is an electric vehicle, acceleration is both immediate and silent.

What is the future of the Vision EQXX?
While the Mercedes-Benz crew that worked on this project is suffering from a spectacular case of perma-grin, they are brainstorming possibilities for another record-breaking drive, perhaps in the United States. “We would anticipate the vehicle to make a number of appearances at motor shows before being permanently installed in a prominent position in the Mercedes-Benz museum” edmunds.com reported.

However, the work to get here is still ongoing, and many of the advances will eventually find their way into future Mercedes-Benz automobiles as well. Some of them are already in use on the EQS sedan, according to the manufacturer.

The vehicle and the Mission XX drive demonstrated that this initiative was a success, and they laid the groundwork for putting all of these advances into action.