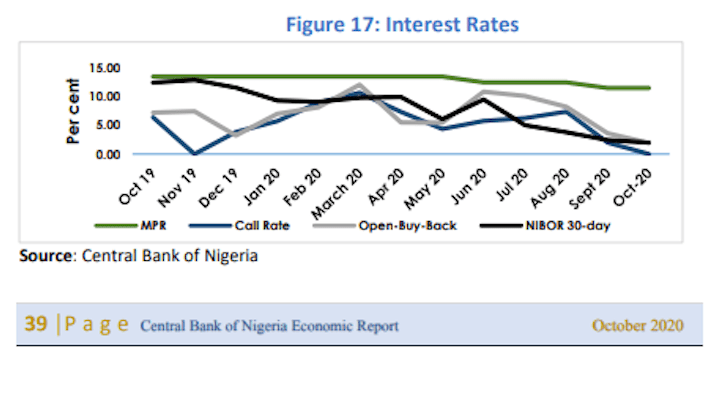 A total of N606.90 billion was placed at the SDF during in October 2020, with a daily average of N35.70 billion in 17 transaction days during the same period. When compared with the level in the month of July, the money that banks keep with the CBN increased by 63.62 percent from N370.92 billion in July 2020.

Daily request ranged from N13.00 billion to N50.00 billion in October. Cost incurred on SDF in the month stood at N0.11 billion.

“This will imply that the banks have been keeping money with the CBN. The question is what is the rate of the deposit they are keeping with the CBN? Is that rate attractive enough compare to if they have to expose that money to the real sector, Abiodun Keripe, managing director, Afrinvest Research at Afrinvest West Africa commented.

Banks and merchant banks have continued to access the Standing Facilities window to square their liquidity positions in October 2020, the CBN noted in its monthly economic report for October 2020.

The trend at the CBN standing facilities window showed more frequency at the SDF segment, due to improved liquidity in the banking system.

Applicable rates for the Standing Lending Facility (SLF) and SDF stood at 12.5 per cent and 4.5 per cent, respectively.

Keripe said 4.5 percent rate is very low compared with if they have to create risk asset – lending to real economy.

“The banks are saying they rather keep their money with CBN and earn around 4.5 percent on the SDF than taking the risk of lending to real sector, which conflicts with what the CBN is trying to achieve with the Loan to Deposit Ratio (LDR).

The Apex bank increased banking sector LDR to 60 per cent and later 65 per cent in 2019, to spur lending to the real sector.

“The CBN increased the deposit ratio for the banks so as to compel them to lend to real economy that again conflicts with that”.

Yield on the fixed income market, which is where the banks on average also play well, the yield has significantly contracted.

“What is the average OMO rate compared to that of SDF? Is it more attractive than the OMO rate? If it is more attractive then that explains why they prefer keeping money with the CBN rather than using it to buy OMO bills,” he said.

In a nutshell one can deduce that banks may be considering lending to real economy more riskier, which can be justified by the fact that the economy has already slipped into recession. A lot of businesses, households and micro enterprises were affected by the measures taken to combat the impact of the pandemic, which include economic lockdown, social business, and major disruption in business activities.

Analysts in the financial services sector expect that rising liquidity in the banking sector, resulting in lodgement of funds at the SDF, would be of concern to the CBN as the Monetary Policy Committee (MPC) take decision on benchmark interest rate on Tuesday.

The CBN on December 1, 2020, introduced a special 90 days tenor special treasury bill with zero coupon as part of efforts to deepen the financial markets.

Uche Uwaleke, professor of capital market and president Capital market Academics of Nigeria, said, “I think the CBN is being innovative by creating new liquidity management tool in a manner that supports economic recovery”.

He said the special CBN Bills were in connection with deposit money banks excess cash reserves with the CBN.

The idea of securitizing excess cash reserves balances, that is converting cash deposits of banks with the CBN above the 27.5% reserve requirements into tradable 90 day securities will improve the liquidity position of Deposit Money Banks and it was in the interest of financial sector stability especially against the backdrop of the fact that cash deposited with the CBN by way of statutory requirements is not remunerated, Uwaleke said.

On interest rate development, the CBN’s report noted that key interest rates, prime and maximum lending rates, recorded significant declines at end-October 2020, due, mainly, to the sustained intervention by the CBN and liquidity surfeit in the system. Money moved in tandem with the level of liquidity in the review period.

Short-term money market rates traded below the Monetary Policy Rate (MPR) of 11.5 per cent for a major part of the period. Average inter-bank and OBB rates were 0.0 per cent and 1.9 per cent, respectively, in October 2020.