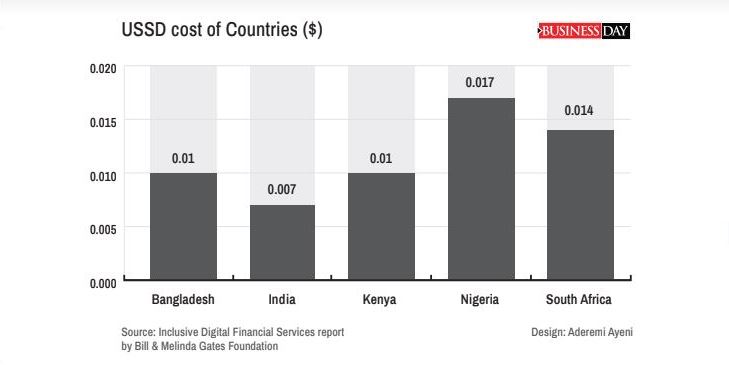 Nigeria has increased the service fee for Unstructured Supplementary System Data (USSD) from N4 to N6.98 per with effect from March 16 and many feared it could derail the Nigeria’s plan to improve access to financial services.

MTN Nigeria had on October 20, 2019, informed its subscribers of plans to charge N4 for every 20 seconds of USSD transactions, drawing the ire of customers who are already bogged down with bank charges. The CBN issued a statement opposing the plan saying it is a cost on infrastructure, which Telcos should bear. But Telcos described it is an investment to provide a service.

These key stakeholders may have resolved the disagreement with the new rate but many customers are unhappy. With this tariff hike, Nigeria now charges the highest rate among emerging countries using the USSD system.

“The new increase should somewhat influence their behaviour because these are low-income earners and they are more price-sensitive,” he said.

Countries like India, Kenya, Bangladesh, and South Africa have USSD fees per session of $0.007, $0.01, $0.01, and $0.014 respectively compared to Nigeria’s USSD fee of $0.017 based on data from an Inclusive Digital Financial Services report by Bill & Melinda Gates Foundation.

Part of the plans by these countries to financially include more people was to cut USSD rates. For example, in 2016, India reduced tariffs for USSD-based mobile banking transactions to RS0.50 from RS1.50.

The reduction played a part in its improved financial inclusion as almost 80 percent of adult Indians have bank accounts, according to the Global Findex Database published in 2018.

Also, in 2017, under the agreement with the Competition Authority of Kenya, Safaricom, East Africa’s largest and most profitable telecommunications firm cut its charges for USSD services to Sh1 from Sh5, a price that will be retained for at least five years in order to intensify the heat on the dominant telecoms’ operator.

These include Aadhar, a biometric database that provides a unique identity to each Indian citizen; no-frills savings bank accounts called Jan Dhan; the direct transfer of social benefit payments into these Jan Dhan accounts; and a digital payment infrastructure called BHIM.

Essentially, India developed a framework to capture every person without a bank account who uses a USSD service and gradually put them on a path to opening an account. Nigeria’s USSD service lacks this attribute so the impact of a rate hike may be muted.

Today, 90 percent of India’s 1.3 billion populations have a unique Aadhar identity, which is vital for meeting anti-money laundering “know your customer” (KYC) requirements. In the last four years, 330 million new Jan Dhan bank accounts have been opened according to the World Economic Forum(WEF)

In Kenya’s case, Safaricom, its biggest telco was compelled to cut its USSD rate after banks launched a rival service, Pesalink, that enables users to transfer money directly from their accounts to counterparts with accounts in other banks without going through the Telco’s M-Pesa service.

Staring down at an inquiry into Kenya’ USSD market by the CAK over anti-competition concerns, Safaricom had to slash its USSD rates.

In Kenya, different Telcos were charging different rates which were opaque prompting the regulator to mandate uniform pricing using the lowest range. Therefore, Kenya’s USSD rate cut is much more about consumer protection.

Though USSD is important in delivering mobile financial services to low-income customers especially in rural areas without recourse to banking apps and internet service or walking into a bank, it is not complete by itself to address financial inclusion as the Indian experience shows.

Financial institutions in India understood the market and structured products accordingly, say WEF. For example, agricultural income is seasonal and lumpy hence when lending to a farmer to buy a tractor, they structured the loan product so that the repayment cycle is seasonal and not monthly.

They also provided financial literacy and the government partnered with service providers all based on the data collected through the USSD service. As volumes increased, it was easier to cut rates.

Some analysts agree this is a viable plan. Ayodeji Ebo, Head, Retail Investment, Chapel Hill Denham said, “In my view, the cost is reasonable given the high cost of doing business in Nigeria. The cost may reduce as volume improves.”

Ebo said he does not expect the increase in rate to hamper financial inclusion as the ease of usage will compensate for the cost especially now in rural areas where banks are scarce.

And indeed volumes are rising in Nigeria. According to the National Bureau of Statistics, USSD volumes rose by 33.4 percent to 133.1 million in the first quarter (Jan-Mar) of 2020 from 99.8 million in the third quarter (July-Sep) 2020, while its value rose by 29. 1percent, this indicates that price correction could still set as volumes increase.

Also, a total of 336.5 million USSD volumes were recorded in the first nine months of 2020, while its value stood at N3.4 billion.

According to Nigerian Communications Commission data, there are over 200m mobile subscriptions in Nigeria but about 20 percent use a smartphone according to data from Trading Economics, further indicating more potential.

Ayorinde Akinloye, an analyst at United Capital Plc said the cost of using USSD relative to other alternative financial services is still cheaper for consumers.

“Looking at your opportunity cost, when comparing it with going to the bank to transfer money to someone or using USSD to the transfer, you will see that it is better and more convenient to use USSD because financial institutions are scarce in rural areas. It will only have an impact if the USSD fee increases to N50- N100 per transaction,” he explained.

However, it is possible that rural community dwellers on account of the few could minimize their frequency of using the USSD according to Adetutu, but even now some rural dwellers pay more for agency banking services.

For example, in some areas POS services to transfer or receive money costs around N100 for any N5, 000 received or sent.

“For people in the rural areas what matters to them is access to funds, not really the cost. So, they don’t mind losing that little amount of money as long as they can get the funds,” according to a banker.

It is a big win for the Telcos that have waited over a year to get their fair share of the thriving USSD market. Banks also get to win because by agreeing to the new regime, they wouldn’t have to bear the burden of paying for the N42 billion Telcos say has accrued to them.