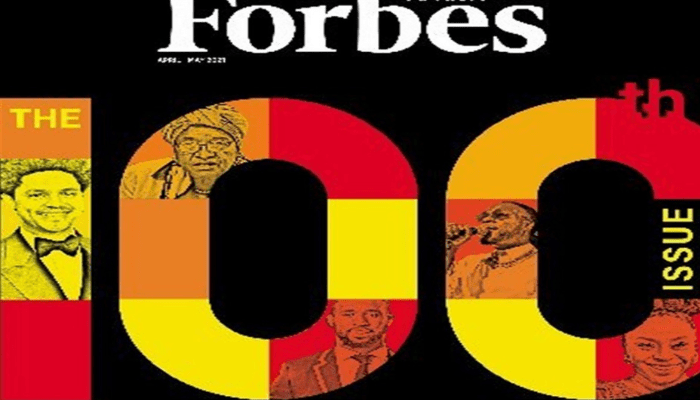 Some notable Nigerian entertainers and creative personalities have been recognized in Forbes Africa’s Top 100 Africans’ list.

The list, which is published in Forbes Africa’s 100th issue on Apri l , 2021, recognized and celebrated exceptional Africans in three categories of; inventions, innovations and icons.

Out of 18 Nigerians recognized on the list, 11 made the icons category, which is mainly for musicians, movie stars, writers and other celebrities.

The 11 Nigerians in the category include; Davido, an Afrobeats superstar, Omotola J Ekeinde, one of the biggest actors to come out of Africa, Wizkid, another one of Nigeria’s brightest and biggest stars, who won a Grammy alongside Beyonce for their song Brown Skin Girl, Burna Boy, one of the most successful African artists who won the Best Global Music Album category at the Grammy on March 14, 2021 and Mr Eazi’, Nigerian- born singer.

Others are; Chimamanda Ngozi Adichie, a Nigerian writer known for her feminism, which comes across not only in her books but in the way she speaks, Ngozi Okonjo-iweala, the first woman and the first African to hold the office as the Director- General of the World Trade Organization, Funke AkindeleBello, a Nollywood and Hollywood star, Genevieve Nnaji, a trailblazer in Nollywood, and director of Lionheart, the first Netflix Original from Nigeria and as well, Jeremiah Ogbodo, a Nigerian celebrity fashion stylist who has dressed many African presidents, first ladies and celebrities and Rose Leke, a 74-year old Emeritus Professor of Immunology and Parasitology at the University of Yaoundé I in Cameroon, who has made a significant contribution to the field of science, made the icon category of the list.

Describing as icon as someone who has held true to realize socially positive goals against great challenges and odds, who has lived to tell the tale, who inspires others in a positive way, and who leaves behind a legacy of uplifting work,tsitsi Dangarembga, a Zimbabwean novelist, playwright, and filmmaker, noted that those who made the icon list are truly African icons in their various spaces.

The Top African 100 is a celebration of Forbes Africa’s 100th issue since inception in 2011.

However, to determine those worthy for each component of the monumental list, Forbes Africa scoured the continent through extensive desktop research, phone and Zoom interviews.