We will begin to export local rice in 2 years, says Agric Minister 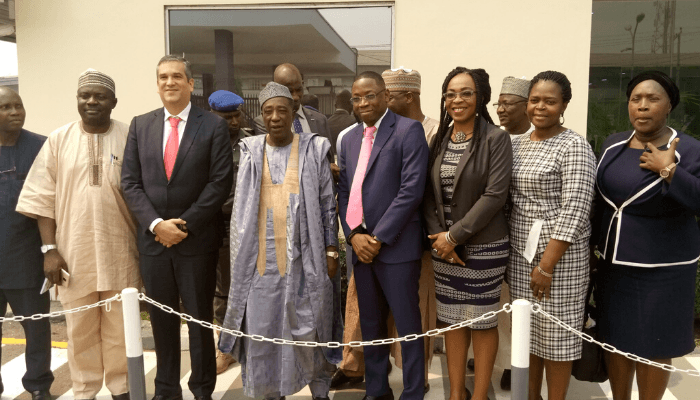 The Agric Minster at Nestle Nigeria
Share
The Minister of Agriculture and Rural Development, Muhammad Sabo Nanono on Tuesday announced that Nigeria in the next two years would start to export Nigeria’s brand of rice to other parts of the world.
The Minister disclosed this after a working visit at the Nestle Nigeria Public Limited Company  (PLC) Office in Lagos, saying that the Country’s land border closure had resulted in increased outputs by many rice milling plants which were operating below capacities before the closure.
He said, “With the improved production rate, Nigeria rice will soon be exported, before the closure of our land border, most of these rice milling plants were partially operating, but now, they not only operate in full capacities but are also expanding”.
“If we maintain the momentum in the next two years, we may begin the exportation of rice to other countries “.
The minister in a statement signed by Ezeaja Ikemefuna, Director of information for the ministry, expressed optimism over the local production rate as most rice producers have stocked rice for the next six months.
He said, “This means that before the stock is finished, dry season rice will be harvested, and before that finishes, the rainy season will come back “.
“It is only in three months from November to January that rice is not being grown in our country. We cultivate rice in a nine-month cycle; probably as we move on the cycle will widen, so we do not have a problem with rice processing”.
He also said that there had been an expansion of local rice Value Chain as well as the creation of more jobs due to an increase in rice production.
“As at today, we have 11 rice milling plants with the capacity to produce from 180 tonnes to 350 tonnes of rice per day”.
“In a few months, another mill with a capacity to produce 400 tonnes of rice per day is going to be opened, with another upcoming 34 smaller mills; then, we have clustered in different areas “.
He added that the local rice farmers were fully engaged and used between 200 farmlands and 300 farmlands directly.
The Minister lauded Nestle Nigeria PLC for its role in assisting local farmers and creating jobs for Nigerians.
Earlier in his welcome remarks, the Managing Director and Chief Executive Officer, Nestle Nigeria  PLC, Mauricio Alarcon, commended the Minister and his delegation for the visit and called for stronger and robust working relationship with the Ministry.
Alarcon further said that greater opportunities for collaboration have been identified in Nigeria, as over 80 percent of its products are sourced locally.
He said, “We source 100 percent of Maize for Golden Morn, locally; soya, millet, sugar, salt and cocoa are locally”.
Share

Why Nigeria must bridge infrastructural gaps to aid food production