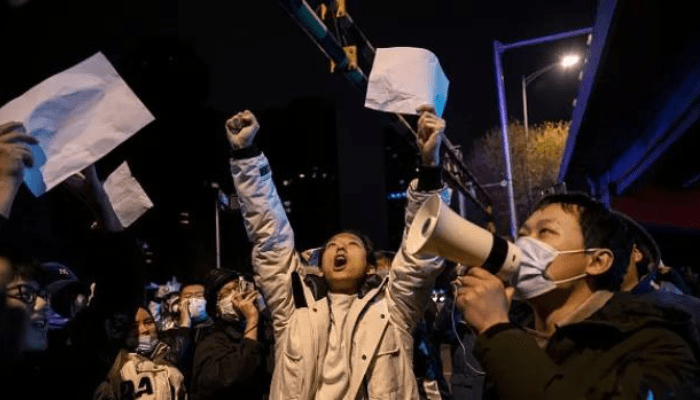 As resentment grows over a fatal fire in western Xinjiang that has been linked to the nation’s lockdown measures, protests against China’s restrictive COVID-19 policies have expanded to new places.

Crowds in Shanghai and Beijing, as well as in other Chinese cities, protested against the harsh COVID-19 measures that have disrupted lives three years after the pandemic began, Reuters reported.

Since leader Xi Jinping came to power a decade ago, protesters have made an unparalleled display of civil disobedience on the streets of numerous Chinese cities and on dozens of university campuses. Xi has presided over the suppression of dissent and the growth of a sophisticated social surveillance apparatus, which has increased the difficulty and danger of protest.

Ten individuals who were trapped in their apartments and died in a fire last week in China’s Xinjiang region because of the lockdowns, according to protesters, although officials strongly disagreed.

“This is, in my perspective, a standard form of free speech. They shouldn’t restrict this kind of right, in my opinion”, said Lam, a 50-year-old resident of Hong Kong.

According to video footage posted online, dozens of students also gathered on the Chinese University of Hong Kong campus to pay their respects to those who perished in Xinjiang.