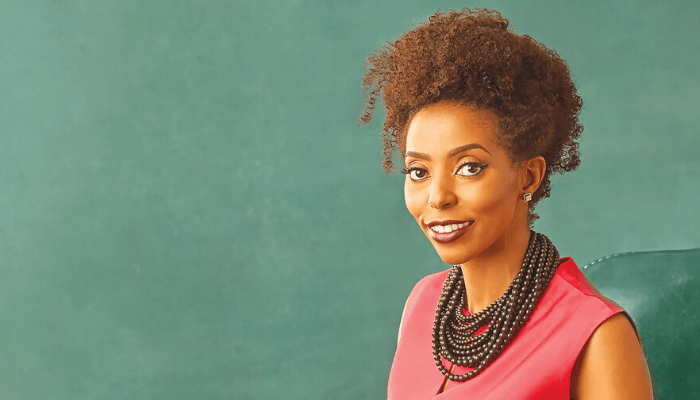 Amy Jadesimi (born 1976) is a Nigerian businesswoman and the chief executive officer of the Lagos Deep Offshore Logistics Base (LADOL), a privately owned logistics and engineering facility in the Port of Lagos, Nigeria.

LADOL is a fully integrated, independent and secure base anchored around a 200m quay with a deep, 8.5m draft. The QUAY provides stevedoring and cargo handling with efficient discharge and loading of goods.

The BASE provides all logistical services, including warehousing, material handling equipment, fabrication and assembly yards, people management, catering, bunkering of fuel and water, facilities for the supply of bulk materials, a helicopter base, open and closed storage facilities, sewage and waste treatment, potable water and medical services.

She was born in Nigeria circa 1976. Her father is Oladipo Jadesimi, the executive chairman of LADOL.

Jadesimi attended boarding school in the United Kingdom. She was admitted to the University of Oxford, first graduating with a Bachelor of Arts (BA) degree in Physiological Sciences and later with a Bachelor of Medicine and Bachelor of Surgery (BMBCh) degree, in 1999. Later, she graduated with a Master of Business Administration from the Stanford Graduate School of Business.

After medical school, she was recruited by Goldman Sachs. She started work in the Investment Banking division of the firm, based in their offices in London, focusing on mergers, acquisitions and corporate finance. She worked there for three years. Even though Jadesimi is better known as a businesswoman, she never intended to leave the medical field and pursue another career. She was offered a job by Goldman Sachs while working with a firm in Oxford. After working there for three years, she never went back to the hospital or her previous job and instead went on to pursue an MBA at Stanford.

Following graduation from Stanford University, she interned for one year at Brait SE in Johannesburg, South Africa, where she worked in the private equity division, as a transaction executive. In 2004, she relocated back to her homeland and joined LADOL, the logistics firm that her father started in 2001. Over time, she rose through the ranks and in 2009, she was appointed by the board as the Chief Executive Officer of the business.

Through LADOL, Jadesimi joined the Venture Strategies for Health and Development (VSHD) organisation where she works with other Nigerian doctors and birth attendants to reduce the high rate of maternal mortality in Nigeria. Upon addressing the many cases, Jadesimi and other practitioners noticed that the drugs used to help reduce the maternal mortality were expensive; therefore, not many pregnant women could afford them.

The VSHD came up with a drug that was well suited for maternal mortality and was better for the market. Under Jadesimi’s supervision, the organisation partnered with a leading pharmaceutical company in Nigeria, Emzor Pharmaceuticals, to distribute the drugs through Nigeria. Beyond LADOL, she is on the Prince’s Trust International global advisory board, a founding commissioner of the Business and Sustainable Development and Commission and a Forbes contributor.

Featured as a guest panellist at the London Business School African summit, speaking on integration and growth on the continent, parallel to the events, Jadesimi took part initialling an art collaboration piece called Remember To Rise.

In 2012, Jadesimi was named an Archbishop Desmond Tutu Fellow. In 2013, she was named as a Young Global Leader by the World Economic Forum. Also that year, she was given the title of Rising Talent by the Women’s Forum for the Economy and Society. Forbes included her in the 2014 20 Youngest Power Women in Africa article. The Financial Times named her one of the top 25 Africans To Watch.

Amy is a founding member of the Business and Sustainable Development Commission, announced in January 2016 at the World Economic Forum in Davos.

Covid-19: A world-shaking pandemic that poses a threat to globalisation

Giving and misgivings: Poverty across the globe and effect on welfare