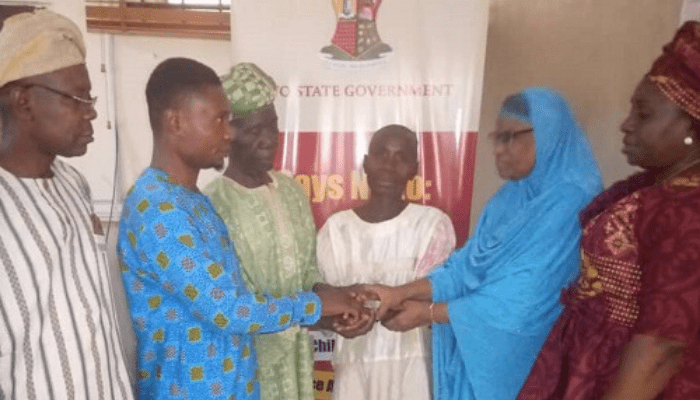 One of the mentally-challenged persons recently evacuated from Mokola, Ibadan, Oyo State, Sadia Adeyemo has been reunited with her family after being certified mentally balance.

The 53-year woman, who was a petty trader before her illness, was reunited with her aged father, Afolabi Adeyemo and her first child, Afeez Nurudeen at the state secretariat in Ibadan, on Monday.

About two weeks ago, the ministry of women affairs and social inclusion, together with relevant agencies, non- governmental organisation and security agencies embarked on routine evacuation exercise.  Several beggars and destitute, among them, nine mentally deranged persons were taken off the street at the Mokola under bridge and handed over to a non-governmental partner, Emmanuel Rehabilitation Centre, for treatment.

Speaking at the reunion, state commissioner for women affairs and social inclusion, Faosat Sanni said the state government would not relent in creating a conducive atmosphere for all categories of persons in the state.

Sanni, who expressed her joy at the quick recovery of the victim, said it was good to identify with people that have challenges.

“Today, I am delighted that Adeyemo, a mother of seven children who has been battling with the challenge in the past eight years has been reunited with her family through the state government.”

She encouraged people with relations who have similar challenges to come out of their shell and report appropriately.

“Though the situation is disheartening, it is better to identify and report on time before it degenerates and with the help of God, things would be normal,” she added.

Receiving his daughter, Afolabi Adeyemo who could not control his emotions thanked Governor Seyi Makinde-led administration for contributing to humanity and not neglecting the less privileged.

Funder of Emmanuel Rehabilitation Centre, Adeniyi Lawal, who handed Adeyemo back to the state government, thanked the government for its efforts.

He noted that psychiatric or mental problem is not a disease and not contagious, but with drug management, counselling, adequate feeding and prayers, it could be treated and well managed once the problem was identified.