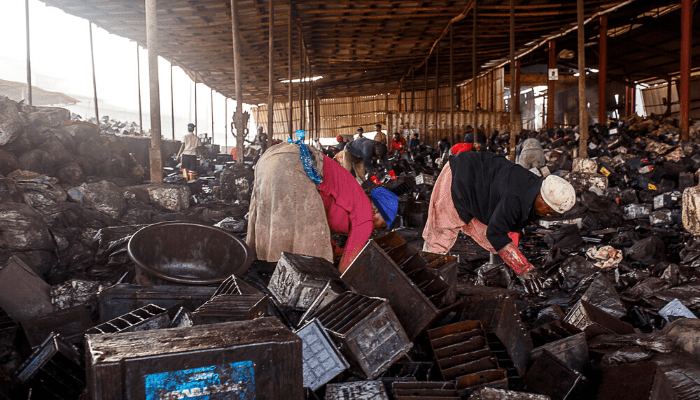 Lead-acid battery recyclers in Nigeria have formed a Producer Responsibility Organisation (PRO), a policy approach emanating from the government which places the responsibility for the post-consumer phase of batteries on operators after a BusinessDay investigation uncovered how local recyclers were threatening the health of some communities in Lagos and Ogun States.

The group called the Alliance for Responsible Battery Recycling (ARBR) said it is working with battery manufacturers, importers, distributors, retailers, recyclers, renewable energy operators, environmental groups, development partners and governments across the country to execute programmes and projects that promote the removal of used batteries from the normal waste stream and ensure their environmentally sound recycling.

“We have introduced a Battery Stewardship Programme to ensure that a take-back scheme is implemented effectively, and the volume of batteries manufactured or imported into Nigeria are captured properly in our databases,” says Terseer Ugbor, executive secretary of ARBR.

Ugbor said the goal is to make certain that the end-of-life recycling is done in an environmentally sustainable manner, keeping in compliance with current environmental regulations, policies, guidelines and the Basel Convention treaty for managing battery waste

ARBR is the Producer Responsibility Organisation (PRO) for the Battery Sector under the Extended Producer Responsibility (EPR) Programme approved by the National Environmental Standards and Regulations Enforcement Agency (NESREA) to synchronize the stakeholders of the battery sector towards preventing the potential hazards from used batteries and the pollution from dirty battery recycling in Nigeria.

Extended Producer Responsibility (EPR) is a policy approach under which producers are given a significant responsibility – financial and/or physical – for the treatment or disposal of post-consumer products. Assigning such responsibility could in principle provide incentives to prevent wastes at the source, promote product design for the environment and support the achievement of public recycling and materials management goals.

One of the motivations for the association according to the group is “a recent investigative report by Business Day Newspaper, supported by the European Centre for Journalism and the Bill and Melinda Gates Foundation (that) concluded that residents in many parts of Lagos and Ogun states are “Dying in Installments” through lead poisoning from battery recyclers,” the group said in their 2019 activity report.

The multiple-award-winning story including the environmental category for Fetisov Journalism Prize, currently the world’s top journalism prize, has earned praises for the rigour and insightful revelation which has had significant impact on environmental policy and practice in Nigeria.

Studies by the Recycling and Economic Development Initiative of Nigeria (REDIN) funded by the Heinrich Boll Foundation have indicated that Nigeria generates over 500,000 tons of used batteries annually from automotive, energy storage, telecoms and other various sources.

With the growing adoption of renewable energy applications and inevitable switch to electronic vehicles, Nigeria’s battery usage is set to grow exponentially but the management of these batteries has been disastrous, the BusinessDay investigations found.

Much of these batteries are moved to local recycling plants who break open the batteries to extract lead which is resold in the international market. However, the process is crude marked by lack of protective equipment, disposal of acidic wastewater in underground water sources and hazardous lead particles finding their way into the bloodstream of residents who live around these plants.

The BusinessDay investigation included blood tests on residents in Ipetero in Shagamu local government in Ogun State, using Lead Care II, a medical testing device manufactured by the United States biotech manufacturer Magellan Diagnostics, capable of immediate measurement of results without sending the blood samples to a laboratory, produced 46 samples which exceeded the WHO threshold of 10 micrograms per deciliter of blood and children tested had  average blood lead levels of 19.8 micrograms while adults recorded an average of 21.1 micrograms.

According to the WHO, in adults, blood lead levels as little as 5 micrograms per deciliter can cause cardiovascular problems and weaken the immune system. In children and embryos, lead attacks brain and nerves and can lead to learning difficulties and even mental retardation. Each microgram costs a quarter to half IQ point.

The investigation led to a ban of exports of lead from Nigeria into European countries and German car makers cutting ties with their Nigerian suppliers of lead ingots.

Organisations that use Lead Acid Batteries for energy storage, vehicle fleets and telecom purposes, are now mandated to inform ARBR of such waste batteries for collection and responsible recycling.

The group in 2019, began the process of developing a database of all used battery recyclers and exporters to access the efficiency of their recycling operations in Nigeria in line with the benchmark assessment tools by the Basel Convention Coordinating Centre for Africa. It said it will build on this this year as well as register and benchmark at least 50 Battery Producers, Recyclers and Collectors in Nigeria.