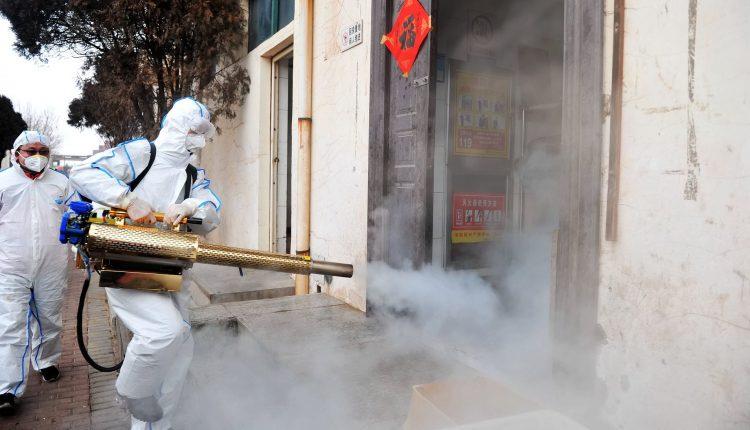 The environmental department of Agboyi/ketu local council development area (LCDA), Lagos has commenced the fumigation of public places and streets as part of the measures to contain the spread of the Coronavirus pandemic.

The LCDA led by Dele Oshinowo is also carrying out sensitisation of the residents on how to avoid contracting the virus, also known as Covid-19. The team was seen on Monday distributing fliers to enlighten the people preventive measures.

Peter Bamishaye, supervisor for the environment, Agboyi/ketu LCDA said that the exercise was to complement the efforts of the state government in ensuring safety of the residents.

“As the state is doing its own, we in the LCDA need to complement that efforts; that is the reason why the Dele Oshinowo- led administration of Agboyi/ Ketu LCDA said that the environmental department should go out to fumigate and sensitise the populace,” he said.

He said it was imperative for the LCDA to fumigate the communities, especially public places and health centres, so that they could be “safe for people during this time”.

With Lagos as the cynosure of the virus, the state government is making effort to contain it including the passage of a bill to help the government enforce its numerous orders regarding limiting the spread, as well as disinfecting streets and major public centres.

While there are also projections that the cases could rise up to 39, 000 within the metropolis, Bamishaye explained that the increase in Lagos was due to the state’s status as an economic nerve centre of the country.

The residents of the area, however, described the fumigation exercise as shoddy and doubted its efficacy in actually curbing the viral spread.

“For thorough fumigation of a whole area, it should be more than 30 minutes. But they didn’t spend up to 10 minutes,” Adebusola Okiki, a fumigation worker, complained.

The residents said the local government officials did not get into their compounds, but rather concentrated only on the gutters and shops. They also stated that there was no sign that the streets had been fumigated as the ground showed no wetness and people returned to their activities within minutes.

“They didn’t get into people’s compounds. Fumigation is something that should be obvious. But it didn’t look as if an area was fumigated.

“When you fumigate, you should still feel the impact even after 20 minutes, but as soon as they left, the whole street became active again,” another resident of Akinyemi said.

According to Okiki, they did a light fumigation, so, “it’s not going to be effective.”

In a phone conversation with our correspondent, Bamishaye addressed the concerns of the resident, saying the focus was on congested streets and promised to take the feedback into cognizance.

“People trek from Adisa Balogun to the Health Centre. So, we’re looking at where people are passing. It’s a continuous process and we’re equally expecting comments from people and we’ll take those comments into our plan to cover more grounds,” he explained.