....It will generate about 5000 jobs to Nigerians, says Amaechi 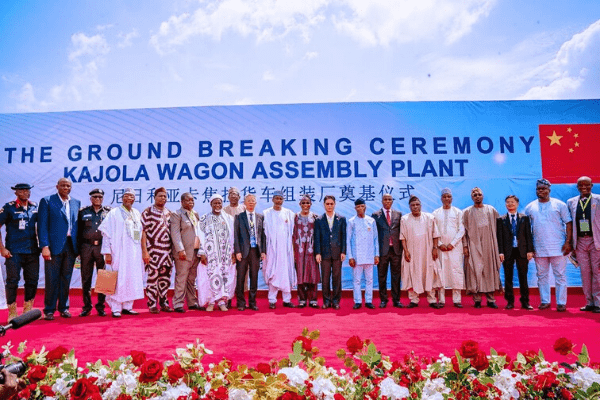 Nigeria is on the match towards breeding life into the country’s railway modernisation system as a viable alternative means of transportation.

During his address, Rotimi Chibuike Amaechi, Nigeria’s minister of transportation said the upcoming wagon assembly plant will complement the federal government’s quest in local content drive and would be able to conserve the country’s much needed foreign exchange which can be deployed to other areas of development.

The transportation minister recalled that on March 7, 2017, vice president Yemi Osinbajo performed the groundbreaking ceremony for the construction of the Segment 2 of the Lagos-Kano Railway Modernization project: the Lagos-Ibadan segment with extension to Lagos ports complex at Apapa which is nearing completion.
The segment holds the key to the development of the economy of the nation from the commercial city of Lagos to another commercial hub of Kano, northern Nigeria.

In a move to meet the increasing demand of both passenger and freight on the new Nigeria standard gauge railway service, the federal government awarded contract for the procurement of rolling stock that is, locomotives, coaches, wagons and contemporary diesel multiple units.

The procured equipment were to enhance the movement of passengers and freight on the Abuja-Kaduna, Itakpe-Ajaokuta-Warri train services as well as the ongoing Lagos-Ibadan Railway. It will also serve any railway service in the West-African sub-region.

It was in realisation of meeting the passenger needs of the rail transportation system that, the federal ministry of transportation realized the need for the advantage to set up this type of plant.

This is in consideration of the potential need in view of the on-going rail projects in the country and the sub-region that the government encouraged the CCECC to establish the Kajola wagon assembly plant. It is expected that the plant would generate job opportunities for Nigerians and as well facilitate the much-desired objective of the government towards the local content capacity development.

It was in the pursuit of these objectives that the federal ministry of transportation signed an agreement with the CCECC Nigeria Limited in March 2018 to establish the plant for the production and assembling of rolling stock, spare parts and maintenance equipment in Nigeria.

Following this development, CCECC conducted a feasibility study in which the choice of Kajola, Ogun State was arrived at as a suitable location for the project.

The project is a direct investment of Messrs. CCECC Nig. Ltd in the country and would remain as part of the gains from the contract signed for the supply of rolling stock.

This will be the first of its kind in Nigeria and the first batch of the wagons to be assembled from the production line of this plant will form part of the rolling stock for Lagos-Ibadan and Abuja-Kaduna Railway operations. Other rolling stock would be produced as its production capacities increase.

When completed, the facility would be able to generate about 5,000 jobs. At the long run, Nigeria would be able to manufacture rolling stock for domestic use and for export to other African countries.

Among all these, it is cardinal to mention that the sustainability of our railway modernization projects would depend on our ability to develop local capacity to construct, maintain and manage our new railway system. It is on this note that we feel that this project is germane to the railway development in Nigeria and that CCECC should be given every reasonable support to actualize this investment.

The transport minister expressed gratitude to the president and the vice president for their unwavering commitment and support in the execution of railway projects.

‘If you dream big, the universe will arrange itself around you’

Lagos-Ibadan rail project: Yaba, Jibowu level-crossing to be closed down