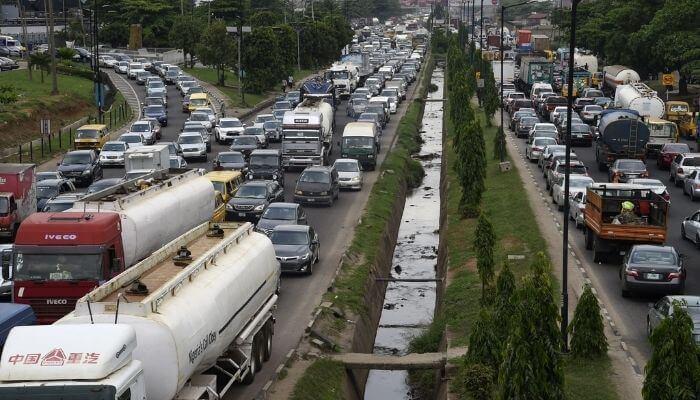 Businesses and commuters in Lagos have expressed dissatisfaction over the worsening traffic congestion arising from construction activities and deep potholes caused by heavy rains and flooding.

Experts say Lagos, a major commercial hub, grapples with several developmental challenges such as high population, high cost of living, mental stress, traffic and security issues, making it a difficult place for citizens to survive and thrive in.

“Lagos traffic leaves many commuters in a tangle of annoyance. I spent nearly five hours in one day following the same route. It is quite unpleasant and lowers workplace efficiency,” Goddey Odin, a research analyst at SBM Intelligence, said.

Odin said the physical and mental health of workers is severely impacted by traffic congestion, which also causes noise and environmental pollution.

Traffic congestion also makes Lagos one of the top most stressful cities in the world, according to a 2021 report compiled by VAAY, a German CBD company. Also, a similar report published by the Economist Intelligence Unit ranked Lagos the second least liveable city in the world and the worst in Africa.

The traffic gridlock has seen motorists spend longer hours on the roads and commuters paying more or trekking long distances.

Disturbed by the impact of the traffic congestion on businesses and residents, the United States Consulate in Nigeria, a couple of years ago, hosted a conference themed ‘The Never-Ending Story, Lagos Traffic Congestion: What can be done? Will it be done?’

Experts at the virtual conference advised that Lagos should improve its traffic situation by investing in a three-leg transport system such as rail, mass buses transit and ferries, adding that such investment would not only improve traffic situation, but also drive job creation and business growth.

For them, not only is the state’s increasing gridlock killing productivity and limiting the growth of businesses, but it is also causing severe physical and mental stress for the average Lagosian who stays in traffic for an average of 10 hours a day in order to carry out his daily activities.

According to the experts, Lagos is fast becoming a world economy that is growing rapidly but to support the growth of its economy, it needs more investments and investors.

Two years later, Lagos residents are still groaning over congestion as the traffic situation in both the metropolis and the hinterlands, on expressways and inner roads has worsened.

Mobosola Olorunfemi, a banker who resides at Ikosi-Ketu and works on the island, had to ask for a transfer letter to a branch closer to her residence because of the transport fare and stress.

“I had to leave work earlier than I should when I worked on the island, so as to meet up with the normal fare and also not get stuck in traffic, which always affected my productivity,” Olorunfemi said.

Frank Ozo, a Lagos-based journalist, agrees, noting that when it rains, the roads are worse and the portholes are bigger, which requires more frequent car repair.

Lagos is said to be a huge construction site and it is such that almost every part of the state has one form of construction work or another going on. Residents say it is a good thing for which they commend the state government and urge them to do more.

But they feel uncomfortable with the way the contractors go about traffic management, which, they say, leaves much to be desired as the contractors block almost the entire road, leaving a narrow space for both on-coming and out-going motorists, thereby causing stress and suffering.

Hayes Emmanuel, an engineer who works at Ogudu and resides in Yaba, said he leaves his house on time in order to avoid spending more than two hours in traffic.

“The worst part is that there won’t be buses on rainy days, and when one arrives, there will be heavy traffic and, in the end, there’s little or nothing to blame for the traffic jams on the roads,” he added.

According to a publication by Danne Institute for Research, Lagos roads are unable to cater for the volume of traffic they experience as infrastructure is still inadequate, and options such as water and rail transport are underutilised.

“With 2.2km of road for every 1,000 inhabitants and total passenger traffic of 20 million daily, the provision of roads in Lagos is one of the lowest in West Africa,” the publication said.

Funke Awogbade, a remote worker who lives in Badagry, lamented that the usual two hours she spends on the road has now doubled.

“I can no longer calculate my transport fare per day because it’s not the same fare when going to work that I would spend coming back,” she said.

The Lagos-Badagry Expressway has remained a perpetual construction site, having been under construction since 2009 when the contract for its reconstruction and expansion from four to 10 lanes was signed.

Motorists and commuters coming to work in Lagos from Magboro, Mowe and Ibafo in Ogun State spend hours on the expressway.

Thirteen years on, it remains uncertain when the construction work on the expressway would end.