The multiple hurdles on Nigeria’s path to commercial 5G

Multiple hurdles stand in the way of Nigeria’s ambitious plan to deploy the fifth-generation (5G) technology by January 2022.

Africa’s largest economy aims to join a global race of countries that include the United States and South Korea in positioning to stay competitive in the world economy with 5G technology, the deployment of which is projected to add 22.3 million jobs and $13.2 trillion to global economic output by 2035, according to a research paper by Informa Tech.

However, hurdles ranging from an infrastructure deficit to operators still struggling to maximise returns on investments in older networks, stand in the path of Africa’s largest economy and may dim the prospects of a successful launch of the 5G network within the given timeline that has been set by the government.

Firstly, investors would need to pay a licence fee projected at between N75 billion and N100 billion for a period of 10 years, a fee some operators find overly expensive according to interviews done by BusinessDay.

Nigeria must then contend with a raft of other challenges from a deficit in telecoms infrastructure, low adoption in previous cellular generations like 3G and 4G, uncertainty in the policy environment, and rising insecurity that has seen thousands of telecom equipment destroyed.

Nigeria pushed the knob on the drive for 5G in 2018 when the NCC announced it has approved dedicated spectrums for the trial of the service in Nigeria. Following that announcement, in 2019 the country became the first West African country to initiate 5G network trials when its biggest telecoms provider, MTN Nigeria, ran spectrum tests in its offices across several locations. With support from mobile operators like Huawei, ZTE, and Ericsson, the initial demos proved successful. 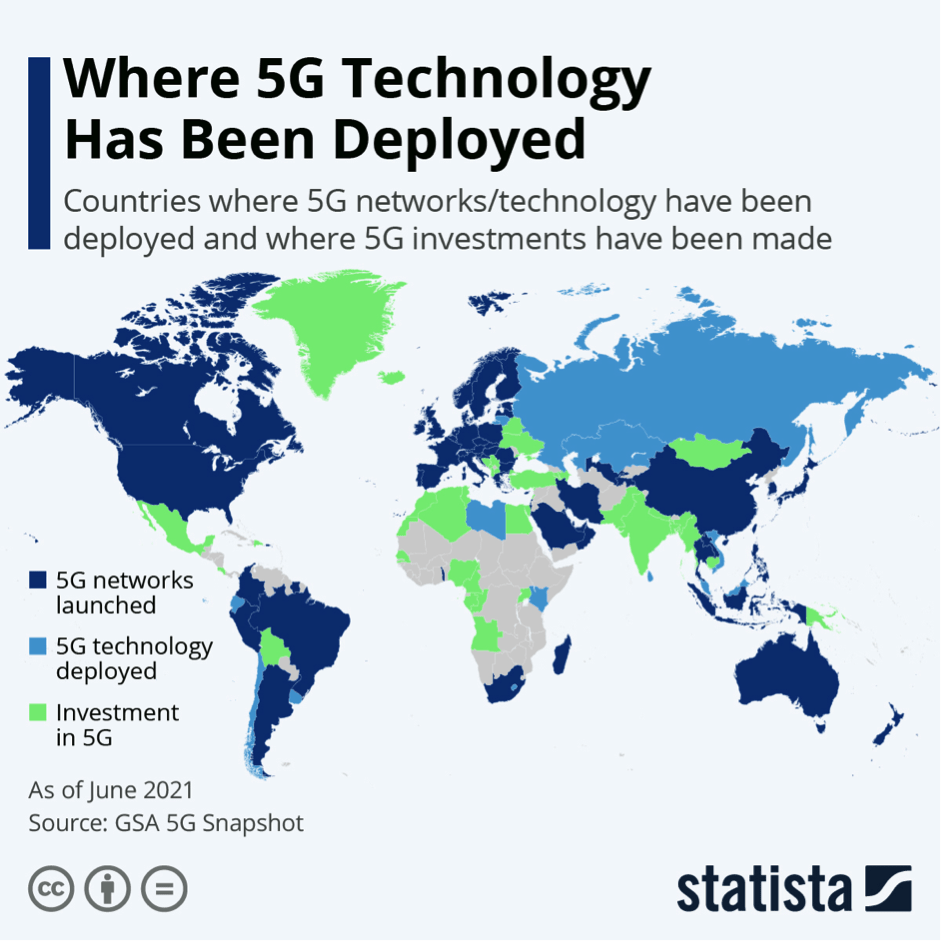 Encouraged by the successful trial, the NCC started crafting a National Policy on 5G Network, which was approved in September 2021, two years after.

According to the Ministry of Communications and Digital Economy, the National Policy on 5G took two years largely because the government wanted to carry out extensive engagement and the need to ensure adequate public awareness and sensitisation.

With the approval in the bag, the NCC is confident that it is well on course to launch the technology come January 2021. But it is not going to be so easy.

The National Broadband Plan 2020 set an ambitious target for 3G coverage to at least 80 percent of the population by 2025. Less than 4 years to the timeline, coverage stands at about 50 percent while 4G is at 37 percent coverage.

The coverage of these networks is likely to decline further in 2021 due to increased insecurity. Currently, nearly all the seven states in northwest Nigeria have been affected by the shutdown of telecom services, which the military says is part of measures to fight insecurity in the region.

Residents in states like Zamfara, Sokoto, Katsina, Niger, Kaduna, and Kebbi continue to be shut out of mobile and internet connectivity due to increased insecurity in the region.

While announcing the ban in Kaduna, Governor Nasir el-Rufai suggested that the shutdown may affect other states in the north-central region. It should also be noted that prior to the shutdown in the northwest region, the NCC had said there were 114 communities in Nigeria that have yet to get access to telecom services. While the insecurity situation in the country pushes up the number of communities without cellular connectivity and the likelihood that it will spill over to other regions, insecurity also portends a difficult future for the viability of the 5G network in Nigeria.

Beyond security, deploying a 5G network may not make sense to smaller telecom operators. At a meeting with stakeholders in September, Umar Garba Danbatta, the executive vice-chairman of the Nigerian Telecommunications Commission (NCC), informed operators that the 5G operating licence would cost them between N75 billion ($182.1m) and N100 billion ($242.9m) for the 10-year licence.

The NCC has not yet made the fee official but is making considerations in view of the high cost of the spectrum for the technology.

“At N75 billion, the implication is that operators would have to include N7.5 billion in their annual budgets every year for the next 10 years to settle the licence fee,” says Olusola Teniola, Nigeria National coordinator for the Alliance for Affordable Internet (A4AI).

“The operators that want to offer 5G services will include this cost in their business plan. As long as the financial model makes business sense they will go for the 5G licence. If it does not make business sense they will not bid or acquire the spectrum. So, the final decision on this will be based on the business plan each operator wants to operate,” says Ike Nnamani, president, Association of Telecommunication Operators of Nigeria (ATCON).

The cost of the licence would not be the only consideration that operators would make to decide the unit price of 5G network to the end-users. There is the cost of infrastructure.

5G technology, to be sure, comes with a unique architecture different from previous generations of wireless infrastructure. Importantly, the infrastructure transits from traditional large cell towers stretched over long distances to a network of smaller cells sited more closely together.

According to politico.com, to make that infrastructure change, a country like Nigeria will likely need an estimated close to a million new cell sites by 2025 to remain competitive in 5G.

Additionally, the new cells will have to be connected by a robust wire network.

5G antennas, while being able to handle more users and data, beam out over shorter distances. In that case, providing access to rural communities will be as much of a challenge as it has been with LTE. Even with antennas and base stations getting smaller in this scenario, more of them would likely have to be installed on buildings or homes, according to experts at futurithmic.com.

Cities will probably need to install extra repeaters to spread out the waves for an extended range, while also maintaining consistent speeds in denser population areas, the experts said.

Apart from the high capital expenditure required to deploy 5G infrastructure, telecom operators face two other challenges. The first is the unwieldy fluctuation of the naira, according to experts. The telecom industry is heavily import-dependent; hence any change in the foreign exchange affects the price of equipment. Since none of the equipment that would be needed for the deployment is manufactured in Nigeria, the telcos with the 5G licences might have to pay a higher cost to bring them in.

Second, state governments like Lagos may present a challenge for operators. The commercial capital is currently on a dig-once project called the Lagos State Unified Duct Infrastructure Project (LASG-UDIP). The project will see the deployment of 6,000km fibre optic cables across the state in two phases. Each phase of the work will cost $100 million (N82bn at N410/$). The concessionaire Western Telecommunications and Engineering Services Metro is expected to bear the entire cost of the project while the state ensures an enabling environment.

The project was initially targeting May 2022 completion but the state government says it can be completed on or before February 2022. When completed and commissioned, telecom operators would be expected to use the ducts to deploy their fibre equipment around the state and this comes at a cost.

Presently, the Right of Way for fibre cables in Lagos costs about N796. Even so, the cost is significantly higher than the N145 fee agreed by the National Economic Council (NEC) in 2012 and reaffirmed in January 2020.

Apart from Lagos, there are about 28 other states that are yet to reduce their charge for Right of Way. Notwithstanding, the NCC and the Minister of Communications and Digital Economy do not see these challenges derailing the launch in 2022. The interest shown so far by the two largest foreign operators MTN and Airtel is behind the confidence. Just like MTN did in 2018, Airtel is getting ready to try the technology in Nigeria.

We are not in talks with Zinox over acquisition – Jumia replies

61 years after, Nigeria not among top palm oil producers

We haven’t adjusted our primaries – APC