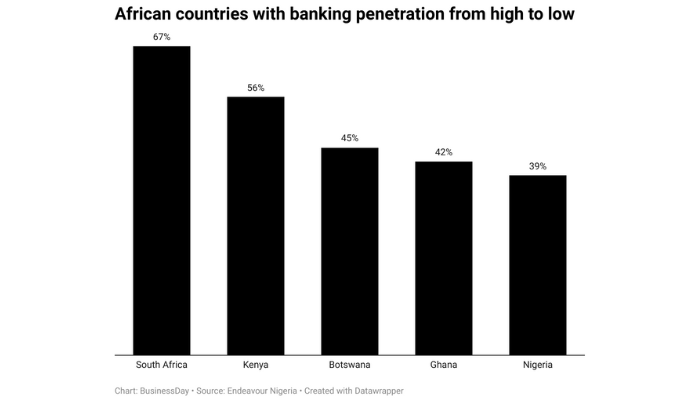 Nigeria has been ranked the fifth African country with low banking penetration, as a result of its high portion of the unbanked population compared to other African countries such as South Africa, Kenya, Botswana, and Ghana.

A report by Endeavor Nigeria titled “The inflection point report” listed the five African countries with the largest banking penetration. South Africa has 67 percent of the population with bank accounts, Kenya 56 percent, Botswana 45 percent, Ghana 42 percent, and Nigeria has 39 percent of its population representing the Fifth African country.

The data from the Nigeria Inter-Bank Settlement System (NIBSS) shows that the number of bank account owners was 55 million as of May 29, 2022. Findings also show that 37 million adults, representing 36.8 percent of the adult population, are financially excluded.

Many of these Nigerians who are financially excluded are low-income earners, low-literacy individuals who reside in geographically inaccessible areas characterised by information and communications technology infrastructure that are weak or absent.

However, banks find it difficult to deploy their infrastructure in such areas. Gloria Fadipe, head of research, FCMB. said every bank wants to break even and increase its profitability which is their benchmark.

Setting up branches and ATM galleries by the bank will require a higher demand from its customers. This will entail a higher penetration by banks, which is exactly what the rural areas can’t guarantee.

She further stated that the “inaccessibility of banks bridges the gap for telcos to exist thereby giving them the opportunity to leverage in its financial markets space in such a geographical zone.”

According to a report by EFINA on payment service banks (PSB) in Nigeria, stated that the central bank of Nigeria {CBN) mandates the PSBs to have 25 percent of their business spread across rural areas.

Its cost implication is to establish these access points for people that lack sufficient liquidity. However, the PSBs are expected to focus on the unbanked population and financially excluded persons.

Ajibola Olude, executive secretary of the association of telecommunication companies of Nigeria (ATCON) said, “A PSB license operator has the opportunity to mobilise untapped resources in the rural areas.”

The CBN and other regulators also have a major role to play in educating and creating awareness to those individuals who are not informed that the lack of a digital ecosystem that facilitates the advancement of customers on the user journey could greatly affect their potential to scale.

Digital channels such as mobile money and prepaid cards serve as an alternative to penetrate the large financially excluded population.

The success of the PSBs will largely depend on further investment in telecom infrastructure in the rural areas, he said.

PSBs are likely to face the same challenges experienced by existing financial service providers. This will greatly hinder their ability to advance financial inclusion.