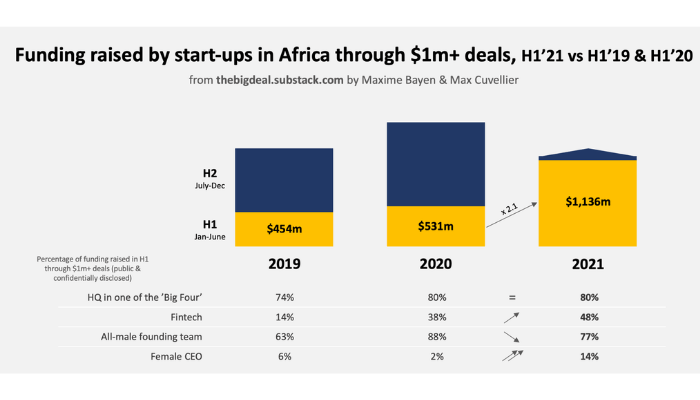 African startups providing financial technology services dominated funding activities in the first half of 2021 accounting for 48 percent of the over $1.19 billion raised so far by the startups.

The data compiled by Max Cuvellier, Head of Mobile for Development (M4D) at GSMA in collaboration with Maxime Bayen, senior venture builder at BFA Global found that over $1.14 billion investors’ capital went to startups that raised between $1 million and above.

The cumulative funding goes higher to $1.19 billion when deals around $100,000 and $1 million were included. The figure more than doubles the amount raised in the first half of 2020.

The funding scene in Nigeria has particularly been very frenzied in 2021, especially after 2020 in which investors were reluctant to deploy funds over uncertainty about the pandemic.

Nigerian tech startups would go on to raise over $200 million in March alone. There were also some significant non-funding announcements for fintech startups in June like Chaka and Cowrywise securing licences from the Securities and Exchange Commission (SEC), the first of its kind in the industry.

In May, AfricArena, an accelerator projected that VC investment in tech startups in Africa will reach between $2.25 billion and $2.8 billion by the end of 2021. This would beat the peak funding raise in 2019.

The AfricArena report also suggested that not “several inhibiting factors” startups on the continent would do better than the 2021 estimates. The factors include the great difficulty to travel into and across the continent, the macro-economic uncertainties, as well as a slower commitment of capital from LP to new GP Funds, and the increased difficulty to raise capital at a very early stage.

“On the upside, the “great digitalization” started by the pandemic is creating many opportunities in education, fintech, B2B solutions, and eCommerce, and leapfrogging digital transformation issues across the corporate spectrum,” the AfricArena report read.

The fintech startups’ share of the funding outpaced the amounts in previous years where most of the fintech funding was raised in the second half (89% of it in 2019, and 79% in 2020). Max Cuvellier notes that if the pattern is sustained, the share of fintech could well keep growing.

The majority of the funding, however, is still being controlled by startups with all-male founding teams accounting for 77 percent. But the number of funding raised by female CEOs has grown at 14 percent compared to 2 percent from the previous first half.