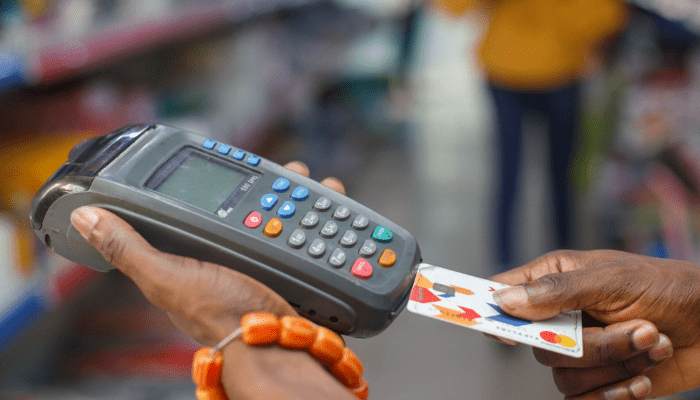 One morning just like every other day of the week, Esther Ojo rises before dawn to beat traffic by commuting from Oshodi to her office situated in Lekki, a naturally formed peninsula, adjoined to west Victoria Island and Ikoyi districts of Lagos.

This particular day was different as the cost of transportation increased due to torrential downpours, a familiar development in Nigeria’s commercial capital.

In need of cash to continue her journey and with no Automated Teller Machine (ATM) insight, a point of sale (POS) kiosk from which she could promptly withdraw money caught her attention. Actually, it was more than one, there were several within distance of each other. She settled with the closest agent and continued her journey to her office.

This mirrors the growing rate of one of the most lucrative businesses in Nigeria currently and its increasing adoption. Today, most streets in urban and rural areas have at least one kiosk with most of them having variations of “PoS is Available” written on them.

The POS terminals are designed to include Nigerians in underserved areas (rural communities and remote settlements) financially. Experts say the ease of getting POS machines from fintech startups including Bankly, OPay, Paypal, Palmpay among others is one of the major reasons why the business is recording a boom in most parts of Nigeria’s commercial capital.

While some young entrepreneurs focus on the POS business as a primary source of income having several outlets, others see it as an additional source of growing disposable income.

Other experts say entrepreneurs can get to register with any agency of their choice using Bank Verification Number (BVN), national identity card, and a copy of any utility bill.

BusinessDay spoke with Nimota Temitope Nofiu, CEO, Neemah ventures who has been in the POS business for 11months and Kayode Aderibigbe, another POS business startup founder on the process and their experiences so far.

The price of the POS machine varies according to the agents issuing it. Research made by BusinessDay shows that with Bankly, one can get it for N30,000. While others charge lower with the least price at N15,000 the maximum charge however is N50,000.

“After getting the machine, you find a strategic location that is busy and since it’s simply a table and chair business, there might be no need for an umbrella. In the case of getting an umbrella, it costs about N10-15,000 and a start up capital of at least N50,000,” Nofiu said.

BusinessDay also found out that the issuing agents take 0.5 percent on every one thousand naira transaction made, and a profit range of at least N3,000 to N5,000 is made on a daily basis from a POS business.

Access to the internet is one important factor that contributes to the ease of running a POS business. “In as much as it does not require so much data usage, there has to be internet connectivity on your phone. On the average, 1.5GB for MTN users will last for about 30days,” Aderibigbe said.

Speaking on the challenges of running a POS business, Nofiu explained that the major challenge is unstable network coverage. “When there is no network on your terminal, people won’t patronize you and if your network is also not stable, you tend to lose customers because not everyone will be patient with you to get good network coverage.”

This also contributes to bigger challenges, for example when a customer receives a debit alert of the amount they want to withdraw at the POS kiosk from their bank, and the POS agent doesn’t receive a credit alert on their wallet. In situations like this, “we will have to wait and if it still doesn’t appear on the wallet as a credit alert, we will have to go to the bank to complain,” Aderibigbe said.

As lucrative as the POS business is, running some losses is inevitable if agents are not being careful. This occurs when recharging airtime for a particular mobile number and it appears on another because of mixups in the mobile numbers, leaving the agent to pay for the mistake.

Also, security could pose a challenge but it has to do with the location of the POS kiosk, hence it is relative. While some areas are safer than others, others are not safe at all to run a POS business. “Where I stay is very safe as I don’t have to take all the profit made to the bank on a daily basis, I keep it with me and go to the bank on Fridays to remit,” Nofiu said.