Four numbers show why Flutterwave is expanding beyond Nigeria

Flutterwave’s first office was opened in 2016 at Capital Square in Lekki, one of the richest neighbourhoods in Lagos, Nigeria, with Nigerian-born Olugbenga Agboola and Iyinolwa Aboyeji as co-founders.

More than six years after, it has grown to become the most valuable ($3 billion) fintech company in Africa, the second most funded tech company ($475 million) on the continent after OPay, and has a physical presence in 16 countries. However, the payment gateway may not be getting its major revenue from its birth country.

A report released by Renaissance Capital shows that the fintech company subsidises its processing fees for Nigeria while the country lags in every segment of infrastructure required to drive Flutterwave’s operations. Importantly, Flutterwave has raised a significant amount of money that is bringing it more investors’ attention. It is no secret that the company plans to list on the stock exchange either in New York or London, but to be ready its revenue needs to justify the attention it is getting from investors.

“We’re becoming what we wanted to be: the infrastructure for any kind of payments, there’s no sector you look at today in Africa that you wouldn’t see Flutterwave taking a piece of that and enabling merchants and consumers to grow and scale. We want to change our focus from just Africa to emerging markets and eventually the US, the UK, and Europe. Our goal is to ensure that our infrastructure powers those corridors,” said Agboola, CEO of Flutterwave.

Here are four numbers that show Nigeria is not pulling its weight for the payment company and could explain the aggressive expansion efforts Flutterwave is making in recent times.

Flutterwave’s processing fees in the select market show Nigeria has the least at 1.40 percent for local payments across the 15 markets the company operates in. Ethiopia, Tunisia, Zambia, Tanzania, Senegal, Ivory Coast, Morocco, and Egypt contribute the most at 3.50 percent each.

Flutterwave claims it currently serves about 900,000 businesses and processes over 500,000 transactions daily. So far, the company claims to have processed about 200 million transactions worth over $16 billion across 34 countries in Africa.

Flutterwave makes money through taking rates – a fee charged by a marketplace on a transaction performed by a third-party seller or service provider. Its take rates are between 1 percent and 4 percent. It also collects fixed fees, FX spreads (the difference between the selling price and the buy price of a currency), transfer commissions, lending, etc.

Although the company may have more merchants from Nigeria and the processing fees are capped at a minimum of N2000 for naira payments, the foreign exchange crisis that has seen the naira consistently weaken against many currencies including those in Africa makes it unlikely that the 1.40 percent fee amounts to much in the company’s revenue.

The population of people that made or received digital payments in the past year for Nigeria is at 30 percent. This leaves Nigeria behind countries such as Kenya, South Africa, and many others in the sub-Saharan African region where Flutterwave has its presence.

It is important to note that digital payments in Nigeria usually require owning a bank account and these accounts must be linked to a Bank Verification Number (BVN). data from the Nigeria Inter-Bank Settlement System (NIBSS) shows that the total BVN count as at 16 January 2022 reached 52.1 million. Compared to the 111.5 million bank accounts as of May 2020, the figure shows that more than 59 million accounts remain unlinked in Nigeria.

While there are 52.1 million linked to a BVN, there is still the issue of whether the account owners have access to the internet. Hence, Flutterwave’s actual addressable market is 30 percent of the 52.1 million accounts that are able to make digital payments. 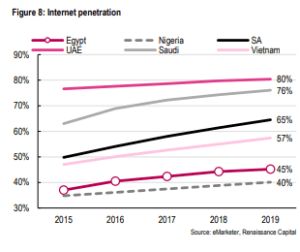 As of February 2022, broadband penetration in Nigeria stood at 40.9 percent according to the latest data from Nigerian Communications Commission (NCC). Renaissance Capital also puts the internet penetration in Nigeria at 40 percent compared with Egypt at 71.9 percent and South Africa at 68.2 percent at the start of 2022. Flutterwave charges a 2.50 percent processing fee in South Africa and 3.5 percent in Egypt.

Diaspora remittance in Nigeria has been fluctuating recently, only managing to rise to $14.2 billion in the nine months ending September 2021. Remittances are a major focus of Flutterwave, which has created products such as Send to address the friction merchants face sending money from abroad to the continent.

Nigeria used to be the largest recipient of diaspora remittances on the continent but it is currently struggling to keep the tap running and has gone as far as offering monetary incentives to citizens in the diaspora to keep sending money home.

While Nigeria leads, the aggregate remittance inflows in sub-Saharan Africa dropped by 14 percent largely due to the COVID-19 pandemic wiping off $6.6 billion (28 percent) in officially recorded flows to Nigeria, which accounts for 50 percent of remittances to the region. Nigeria’s decline has not affected other parts of the continent, many of which are beginning to attract remittance at a faster rate.