Small business owners will struggle to deliver products and services to customers’ homes from Monday following the decision by dispatch riders to embark on a three days strike.

In a strike notice which BusinessDay saw, the delivery companies stated that the strike was to bring to the public the “injustice” they are facing in the hands of Lagos State “taskforce, council boys, MOT and other unnecessary papers.”

Many eyewitnesses have narrated how the staff of different delivery companies was being harassed by officials believed to be working with the various Lagos State government. The harassment appear to have increased after the Nigerian Postal Service reportedly hiked registration fees for courier services. 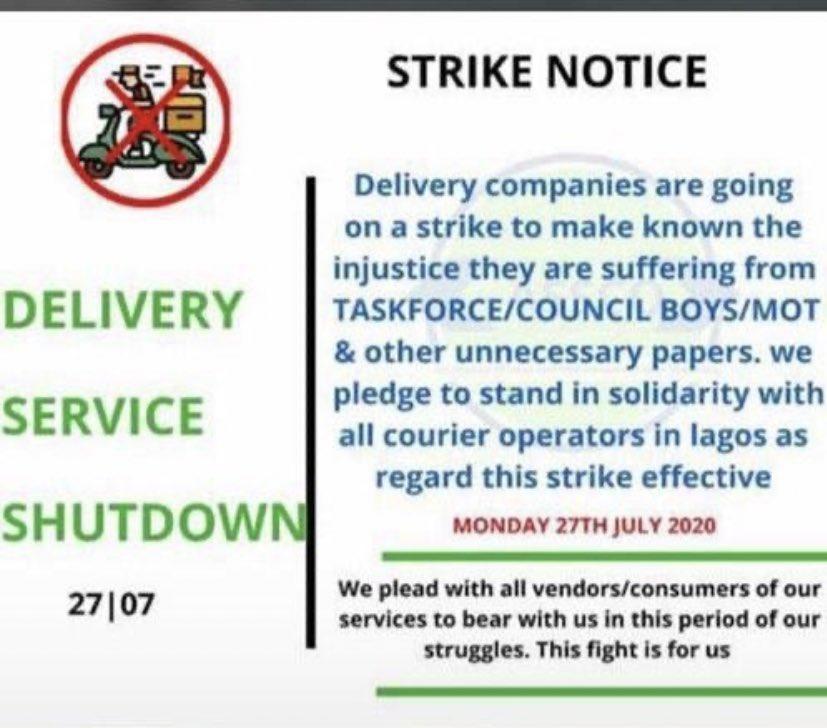 The new charges by NIPOST stipulate that companies that provide international courier services are expected to pay N20 million for a new license and N8 million for renewal of services annually.

The companies operating within regions are expected to pay N5 million for license and N2 million annually.

Following a public outcry on the hike, Ali Isa Pantami, Minister of Communications and Digital Economy said the increase in licence fee was not part of the regulation that was approved, hence it is void.

READ ALSO: COVID-19: How eCommerce sustained thousands of jobs during the lockdown

“The power of regulation of NIPOST lies with the minister. Any change of fee must be specific and be approved by him before implementation. I know the economic challenges of NIPOST. However, looking at the economic hardship of our citizens, we need to suspend any move,” Pantami said on Twitter.

However, on Monday many entrepreneurs reported that the delivery services they use were rejecting to deliver their goods, saying they have commenced strike.

Due to the COVID-19 pandemic and the surge in online shopping, many small businesses now depend on delivery companies to take their products and services to customers.

Our scholarship programmes have reduced youth restiveness in host communities –…