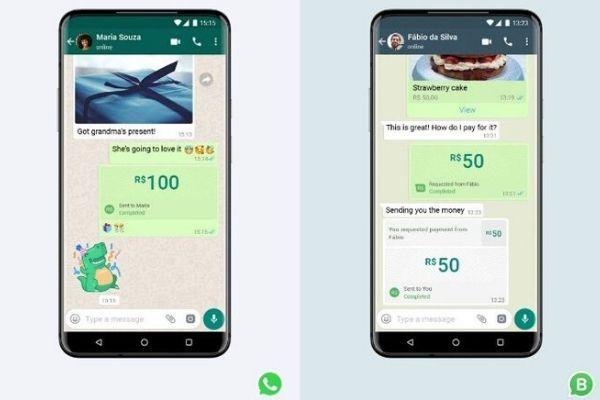 On Monday, WhatsApp, owned by the world’s largest social media company, Facebook, said its users in Brazil would now be able to send money securely or make a purchase from a local business without leaving their chat.

The payment feature for WhatsApp has been years in the making and a subject of many speculations, one of which is that Facebook would launch the service in Africa.

“Making payments simple can help bring more businesses into the digital economy, opening up new opportunities for growth,” WhatsApp said in a statement.

But the choice of Brazil may have come as a surprise to many given that Facebook has been testing the payment service in India and the anticipation was for a final roll-out in the Asian nation. Experts say Facebook may have delayed its launch in India which is also its largest market over regulatory difficulties it is facing in the country. There are over 400 million active users in India compared with Brazil’s 120 million active users.

With the rollout in Brazil on the way, speculations are back that Facebook could be looking at Africa next.

One Nigerian fintech company, Carbon seems to have already anticipated the WhatsApp move and is positioning itself for the market on the social network. 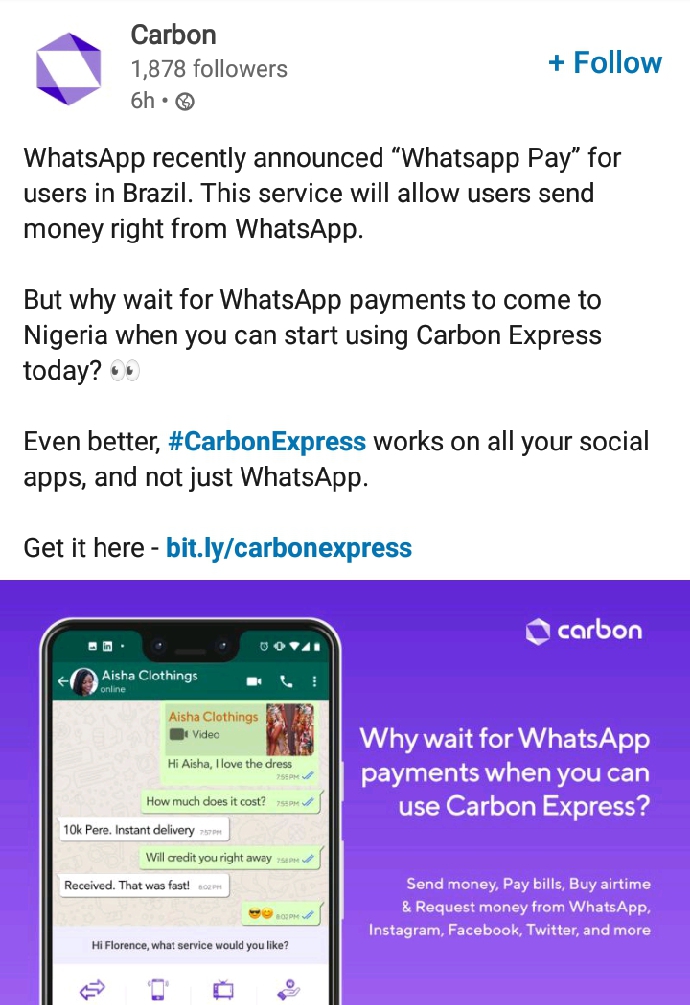 “Why wait for WhatsApp payments to come to Nigeria when you can start using Carbon Express today,” the firm tweeted.

Carbon Express is a keyboard-based solution that enables users to perform financial transactions within any conversation on their mobile devices.

“You have to go into Whatsapp to pay, with Carbon Express you can pay from the keyboard itself. So if you are on Instagram, Telegram or Facebook you can still execute transactions,” Chijioke Dozie, co-founder and CEO of Carbon said. The service is available across all Facebook platforms and Twitter, according to a description by the company on the Google Store.

Carbon is not the only company in the financial services sector using WhatsApp to reach customers. A few Nigerian banks had since 2018 been migrating some of their services to the instant messaging platform.

United Bank of Africa (UBA), for instance, has a chatbot on WhatsApp which provides basic banking services. Unlike Carbon Express, Leo the UBA chatbot is unable to make payments or transfers to users.

By enabling its users to receive payments from WhatsApp and Instagram, Carbon Express is in pole position to secure a partnership with Facebook, should the social media giant finally decide to launch in Nigeria and other African countries.

Collaboration is usually how Facebook is able to facilitate its services in different countries. For Brazil, Facebook is working with collaborators such as Banco do Brasil, Nubank, and Sicredi. The partnership would enable WhatsApp Pay to provide support for debit or credit cards from the financial institutions. The social media is also working with Cielo, a top payments processor in Brazil.

“We have built an open model to welcome more partners in the future,” the social media company said in a statement.

Carbon can also look forward to tapping into the rise in demand that a WhatsApp Pay launch would bring. One of the major attractions of the payment feature would likely be in the zero cost it offers to users. Sending money or making a purchase on WhatsApp is free for users. However, Facebook is hoping to charge a processing fee from businesses receiving customer payments, similar to what they may already pay when accepting a credit card transaction.

King of Bonny: young in age, old in reasoning