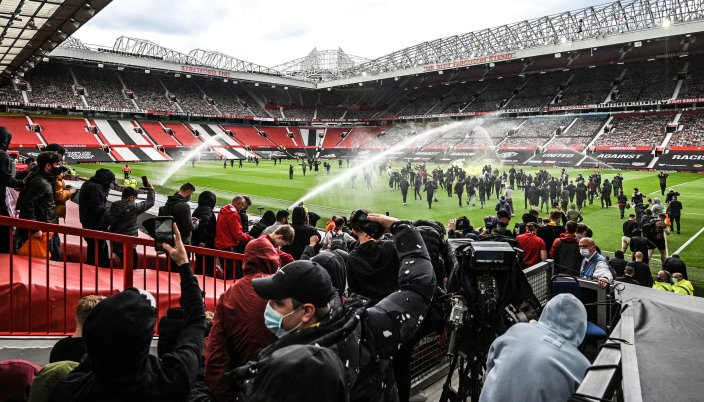 Manchester United’s game against Liverpool at Old Trafford has been postponed following protests against the Glazer family.

Hundreds of fans got into the stadium ahead of the behind-closed-doors contest, which was originally scheduled for a 4.30pm kick-off before being delayed and then called off completely.

A Manchester United statement read: “Following discussion between the Police, The Premier League, Trafford Council and the clubs, our match against Liverpool has been postponed due to safety and security considerations around the protest today. Discussions will now take place with the Premier League on a revised date for the fixture.

“Our fans are passionate about Manchester United, and we completely acknowledge the right to free expression and peaceful protest.

“However, we regret the disruption to the team and actions which put other fans, staff, and the police in danger. We thank the police for their support and will assist them in any subsequent investigations.”

The Premier League condemned all the “acts of violence, criminal damage and trespass, especially given the associated COVID-19 breaches” in a statement after the postponement was confirmed.

“The security and safety of everyone at Old Trafford remains of paramount importance,” a Premier League statement read.

“We understand and respect the strength of feeling but condemn all acts of violence, criminal damage and trespass, especially given the associated COVID-19 breaches.

“Fans have many channels by which to make their views known, but the actions of a minority seen today have no justification. We sympathise with the police and stewards who had to deal with a dangerous situation that should have no place in football.

“The rearrangement of the fixture will be communicated in due course.”

Supporters also gathered outside the team’s hotel – The Lowry Hotel in Manchester, where the United team were staying before the game – ahead of Sunday’s match at Old Trafford.

Many Manchester United supporters are still angry and upset over their club’s role as one of the founder members of the proposed breakaway European Super League.

The plans added to years of discontent and protests from supporters following the controversial takeover by the Glazers in 2005.

Manchester United owner Joel Glazer, unveiled as Super League vice-chairman when the bombshell announcement was made, apologised in an open letter to all the club’s fans after they were forced to pull out of the plans.

How Guardiola turned Man City into a title-winning club