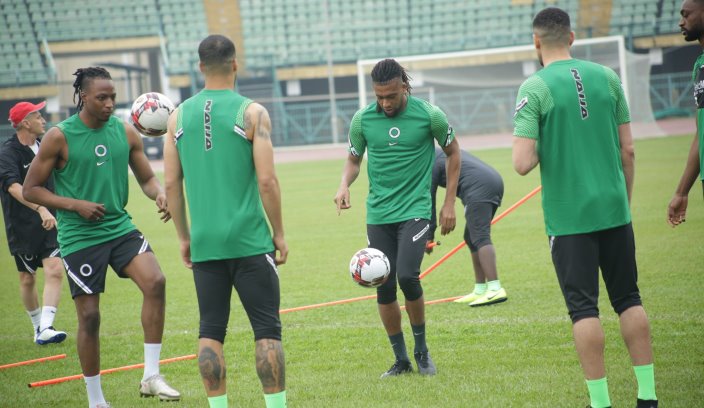 Super Eagles camp is teeming with superstars as countdown begins for the final round of qualification matches for the 2021 Africa Cup of Nations (AFCON) against Benin Republic and Lesotho respectively.

At lunchtime on Tuesday, 23 players had arrived at the magnificent Eko Hotel & Towers, Victoria Island, Lagos where the three-time African champions are ensconced ahead of the big duels.

Nigeria’s Super Eagles top their group with eight points, one better than the Squirrels of Benin Republic, against whom they trade tackles at the Stade Charles de Gaulle in Porto Novo on Saturday in the penultimate round of the qualifying campaign. Three days later, the Super Eagles confront the Crocodiles of Lesotho at the Teslim Balogun Stadium, Lagos in what will be their first encounter in Nigeria’s commercial and economic capital in 10 years.

With three –pointer Sierra Leone, third in the pool, concluding their game away to bottom –placed Lesotho in Maseru earlier, the Eagles could be guaranteed qualification for the final tournament in Cameroon before kick-off in Porto Novo. Failure by the Leone Stars to pick all three points will mean Nigeria and Benin are through to Cameroon.

On Tuesday, Super Eagles Coach Gernot Rohr said his wards will approach Saturday’s match with the intention of picking all three poits, no matter the result of the group’s other tie in southern Africa.

“We are keen to restore a winning mentality to the group ahead of very crucial matches that we have ahead. It is important that we earn victories in the upcoming matches so that we get into our paces for the FIFA World Cup qualifiers. There will be tough games to come and we need to be rearing to go.”

The Eagles have Cape Verde, Liberia and Central Africa Republic to dispute in the 2022 FIFA World Cup race, with only the winner heading to the final knockout series in November. Liberia’s Lone Star will be the Eagles’ first opponents in that race, at home, before a trip to Bangui.

Only Leicester City’s Kelechi Iheanacho, who hit a brace as City flung Manchester United out of the FA Cup at the weekend, is being expected at the Eko Hotels.

The Super Eagles will travel by waterways to Porto Novo on Friday morning, and will stay the night in the Beninoise capital, Cotonou before moving to Porto Novo on Saturday for the game. The contingent will return to Cotonou after the game and travel back to Lagos on Sunday morning.