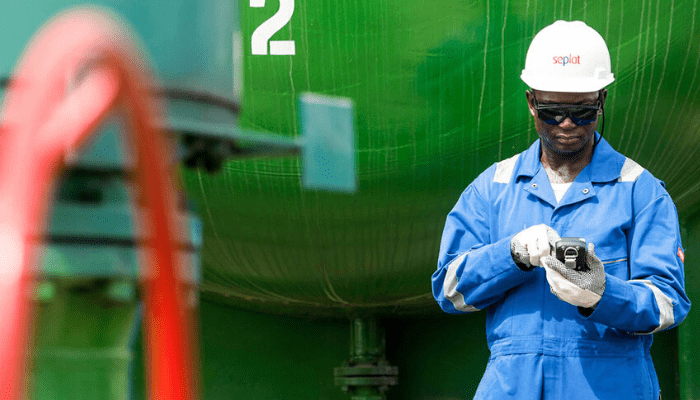 Nigerian independent oil and gas company, Seplat has released its 2019 audited results which revealed its profit increased by 13.5 percent despite lower production and oil price.

Seplat’s oil operations produced an average 23,935 bopd on a working interest basis during 2019, down 6.8percent in 2018 because of the delays to drilling mentioned above.

By the second half of the year, four drilling rigs (two land rigs, one swamp barge and one workover rig) were operational to drill out the revised capex programme with eight oil wells including five new drills and three workovers executed in 2019.

The wells flowed at a combined initial rate for the joint venture of approximately 18,700 bopd. Two additional oil wells and one gas well were spudded in the fourth quarter of 2019 and completed in the first quarter of 2020.

Alongside the oil business, Seplat also prioritised the development and commercialisation of the substantial gas reserves identified at its blocks. Today, the Company is a leading supplier of processed natural gas to the Nigerian domestic market.

Subject to approval of shareholders, the dividend will be paid shortly after the Annual General Meeting, which will be held in Lagos, Nigeria, on 28 May 2020.

Seplat has been tested in previous adverse conditions and is confident that the stronger and more diverse business it operate today will be even more resilient against these unprecedented market events.

The emergence of the COVID-19 pandemic in the first quarter of 2020, as well as pressure on oil prices in March, have placed a premium on solid financial management that focuses upon low-cost production, robust cash management, however the business is hedged against low oil prices and a significant proportion of our revenues now come from gas, which offers further protection from oil price volatility.

In 2020, Seplat plans to invest $100 million of capital expenditure with a target of three new wells across our portfolio.

Seplat has low production costs and can remain profitable even at lower oil prices. Seplat said it has significant cash resources available and will manage its finances prudently in 2020.

Seplat’s business, assets and operations will not be materially affected by Brexit. Seplat also derives most of its income from crude oil, a globally traded commodity which is priced in US dollars. Furthermore, Seplat’s gas revenues are derived solely from sales to the domestic market in Nigeria and therefore are unaffected by international factors.

As at 31st December 2019, the outstanding balance of the loan was approximately US$414 million.

The impact of this loan repayment will be to provide Seplat with significant annual cash repayments during the period end 2022 to end 2024.

After repayment of the loan, Seplat’s interest in OML40’s production and net cash flows will revert to 20.25%, representing its 45percent interest in Elcrest, which in turn owns 45% of OML40.

In addition to the loan, there is a Reserve based lending facility at Westport which is fully secured against the shares and assets of Elcrest and is serviced by the cashflows from the asset.  The yearend balance on the loan was US$90 million

Seplat’s strategy to create multiple export routes for its assets resulted in actively pursuing alternative crude oil evacuation options for production at OMLs 4, 38 and 41 and potential strategies to further grow and diversify production in order to reduce any over-reliance on one particular third-party operated export system.

In line with this objective, the Company retained access to two jetties at the Warri Refinery that enable sustained exports of 30,000 bopd (gross) if required, should there be problems with the primary export route, the Trans Forcados Pipeline (TFP).

However, it was not necessary for Seplat to activate this alternative export route during 2019 as the uptime on the TFP was at 92percent.

In 2020, the Amukpe to Escravos pipeline is set to provide a third export option for liquids production from OMLs 4, 38 and 41 while completion work on the 160,000 bopd pipeline has been slower than anticipated due to delays in the contractor delivery schedule, final activities including the installation of the LACT unit are progressing well.

During 2019, the Group had in place dated Brent put options covering a volume of 4.0 MMbbls to the year end at a combined weighted average strike price of $50/bbl. The net cost of these instruments in the year was $2.7 million.

This hedging programme has been continued in 2020 with up-front premium put options at a strike price of $45/bbl protecting a volume of 4.5 MMbbls (in aggregate) for the first three quarters of 2020.

In December 2019, Moody’s announced a revision to the outlook on Seplat’s B2 corporate credit rating from stable to negative outlook (changed following negative outlook rating for Nigeria sovereign).

S&P’s lowered the rating of the notes to B- (lowered from B following acquisition of Eland due to incorporation of additional Eland indebtedness as “priority debt” within Seplat group). Fitch remains unchanged with a Corporate Rating B-, positive outlook.

Seplat’s tax expense for 2019 was $29 million, compared to $117 million for 2018. Previously unrecognised deferred tax assets of $20 million from prior years’ tax losses and unutilised capital allowances were recognised, after an assessment of the relevant entity’s future profitability showed recoverability of the deferred tax assets.

This resulted in a deferred tax charge of $6 million for the year from $92 million charge in 2018.

Despite an average oil price of $64 in 2019 compared to the $71 in the previous year and a 6.8 percent decrease in oil production, Seplat was able to increase its profit before deferred tax by 13.5 percent to N83 billion ($270 million) thanks to tax incentives.

Profit before tax adjustments, was $293 million, up 11 percent compared to $263 million in 2018 while Finance charges for the period were lower due to the positive impact of deleveraging in the year.

On a cost-per-barrel basis, production operating expenses were higher at $6 compared to $5.77 because of the decrease in production volumes compared to 2018. Emphasis on careful cost management led to an 11percent reduction year-on-year in general and administrative expenses, which stood at $71 million in 2019 compared to $80 million to 2018.

Depreciation, Depletion and Amortisation (DD&A) charge for oil and gas assets decreased to $91 million during 2019 compared to $119 million last year, reflecting lower depletion of reserves because of decreased production compared to the prior year.

Operating profit for 2019 was N95.7 billion ($312 million) compared to N94.9 billion ($310 million) last year, helped by the gas-tolling revenue recognised but set against the reversal of previously recognised accrued interest of $40 million on Nigerian Petroleum Development Company Ltd (NPDC) receivables due to the settlement of these receivables.

Gross profit increased slightly to $396 million from $391 million the previous year as a result higher gas processing revenues and lower nonproduction costs primarily consisting of royalties and DD&A, which were $188 million compared to $244 million in the prior year.

Free movement to Apapa as port city bows to Coronavirus

In numbers, here’s why FG’s revenue was below budget in first five months…