Akure explosion wasn’t meant to attack, it was accidental- Akeredolu 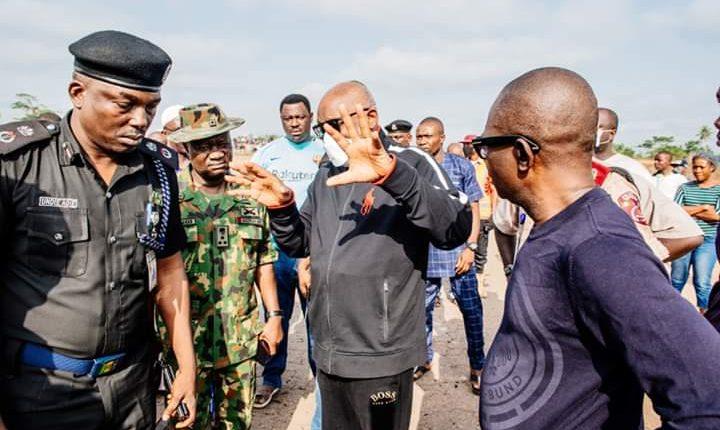 Share
Following the unfortunate explosion which occurred in the early hours of Saturday in Akure, Ondo state capital, Governor Oluwarotimi Akeredolu has said that the explosives which caused mild panic in Akure were not meant to attack as it was rumoured but was accidental.
The governor, who visited the scene of the explosion which cut off the ever-busy Akure-Owo road, destroyed about 100 residential buildings, schools and churches were destroyed and several people injured, disclosed that the explosives were being transported in a convoy of trucks to a storage facility in a neighbouring state before one of the truck developed a fault and resulted into an explosion.
Governor Akeredolu, in the company of his deputy, Agboola Ajayi and heads of security agencies to ascertain the extent of the damage caused by the explosion, said, “I have been briefed by the security chiefs that in the early hours of Saturday March 28th, a vehicle in a convoy transporting explosives to a storage facility in a neighbouring state developed a fault while in transit along the Akure-Owo Road, about 2km from the Akure Airport.
“Security personnel and other individuals transporting the ordinances noticed smoke from the vehicle. After several attempts to extinguish the resulting fire failed, the vehicle and its consignment ignited, causing a massive explosion that was felt in Akure and its environs.

“Presently, efforts are being made to ascertain if there are casualties.

“Following my visit to the scene, I have directed that the area be cordoned off to allow the explosive ordinance department/bomb squad to extricate the vehicle buried underground because it is unclear if there are still explosives that are yet to be detonated.

“Everything is under control and I will be updating the public on any new developments.”

He however appealed to the people of the state to be calm and refrain from flaunting theories that are capable of distracting the security agencies in their investigations, just as he advised people to be careful and take precautions not to rush to the scene.
Share FacebookTwitterLinkedinWhatsAppEmail

In Nigeria, cost of one lawmaker’s official car can buy 6 ventilators

Spate of Kidnappings continue in Ondo as another Navy Commander abducted

If nothing is done Jukun, Tiv crisis will consume all of us – Reps’ member

Spate of Kidnappings continue in Ondo as another Navy…

If nothing is done Jukun, Tiv crisis will consume all of us…