You need to active Javascript on your
Research post Africa,railway

With many rail projects, Africa is charting the path for future prosperity

African countries, especially those in Sub Saharan Africa, are getting more serious with the continent’s economic development in view of the amount of investments being poured into the modernization of rail transportation. From Nigeria to Egypt, and from Mozambique to Morocco, Africa’s rail sector is now receiving attention like never before.

In March this year, the World Bank approved $440 million to support Egypt’s rail network.
“The Railway Improvement and Safety for Egypt (RISE) total project cost is $ 681.1 million, including $ 241.1 million in contribution by the Egyptian National Railways (ENR). The project will focus on modernizing the signaling for the Cairo – Giza – Beni Suef segment of the ENR network and supporting the reforms needed to enhance ENR’s performance and competitiveness”, the World Bank said on its website.

In 2019, the Voice of America reported that Kenya commissioned its flagship $1.5 billion Chinese-funded and built railway that would link the port in Mombasa to Uganda.

According to Research & Markets, as at 2019, African countries had 448 large-scale transport projects (road, rail and bridges) at different stages of development with a total investment value of $430.3 billion. 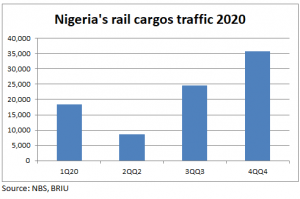 The rail transport system has enormous benefits. In the developed countries that have efficient rail transport system, their economies have experienced accelerated transportation, reduced cost of agricultural produce from the production centres to markets, as well as increase the longevity and durability of roads.

In Nigeria, the neglect of the rail transport system by successive military administrations is partly responsible for the state of our economic development today. Unlike countries like South Korea, Malaysia, Indonesia, among others, Nigeria still lags behind the aforementioned countries on key economic indicators especially the number of people living in poverty.

Rail and other infrastructure projects in Africa came on stream through collaborative initiatives involving African governments, Programme for Infrastructure Development in Africa (PIDA), and other private and public partnerships.
When all the projects are completed, a total of 55,345km would have been added to the rail networks in Africa. 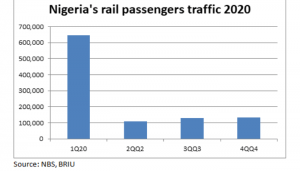 “Across the region, governments have paved the way for public private partnerships (PPPs) to fund a large proportion of projects in the pipeline. In total, 52.4% of the total project pipeline by value is being publicly driven by African governments allocating funds for constructing new roads and repairing existing ones, whereas 33.3% of the total project pipeline is funded by various joint financing arrangements between the public and private sector”, according to Research and Markets.
China is one of the major financiers of infrastructure projects in Africa. Countries where China has funded their railway projects include Nigeria, Djibouti, Kenya, Angola and Ethiopia.

“Based on the pipeline of projects tracked, Chinese contractors are involved in road and railway projects that account for 21.3% of the overall project pipeline value. Other main foreign contractors are headquartered in France (accounting for 17.7%), Turkey (accounting for 8.2%) and the UK (accounting for 3.4%)”, the research out added.
Nigeria is not left out of the drive to revolutionize Africa’s railway networks. This explains why so many rail projects are being executed in Nigeria now.

Earlier this month, the President and Commander-in-Chief of the Federal Republic of Nigeria, Muhammadu Buhari was in Lagos to commission the Lagos-Ibadan railway network. During the flag off ceremony, he said the project would link up the ports with the hinterland.

“This vital line establishes an end-to-end logistic supply chain in railway transport within its short corridor, Lagos-Ibadan, as goods to the hinterland would now be transported by rail directly from the Apapa port Quayside straight to the Inland Container Depot located in Ibadan from where it can be distributed to other parts of the country.

“We have in the rail sector, further to other ongoing railway infrastructure projects, embarked on the completion of the outstanding segment of the Lagos-Kano railway, which is Ibadan-Kano”, Buhari said during the commissioning ceremony.
Latest railway transport data by the National Bureau of Statistics (NBS) shows that Nigeria’s railway network conveyed 1.02 million passengers in 2020. Compared to 2.89 million passengers transported in 2019, patronage was 64.7 percent lower in 2020, of course that is partly explained by the impact of COVID 19 that grounded most economies in 2020.

Transporting PMS to different destination requires about 25,000 trucks per quarter, which transalate to about 277 trucks per day. To move AGO, a total of 5,700 trucks are involved and 1,000 trucks for AGO.
Several trucks are involved in the movement of agricultural produce from farm gate to the nation’s ports in Lagos. The top five agricultural produce are ginger, sesame, cocoa beans, shea nuts and cashew nuts.

On the average, Nigeria produces 690,000 tons of ginger annually. Annual production of sesame is in the region of 480,000 tons; 360,000 tons for cocoa beans; 300,000 tons for shea nuts and 160,000 tons for cashew nuts.
The revitalization of rail network in Africa’s biggest nation will definitely transform Nigeria in the medium to long term.

How South-West, North-West raised half year’s IGR to N849bn

The Burden of Leadership

Deepening local participation in our future

CNG can save Nigeria N3trn, but infrastructure lacking