The fast advancement of technology over the internet’s relatively short history, as well as the general need for more accurate and up-to-date information, appear to be the most crucial drivers driving internet usage. Electronic mail, the World Wide Web (WWW), mobile systems, and computer-improved services have all become a part of our daily lives, whether for work, pleasure, or the acceleration of the symphony of our social ties with one another. 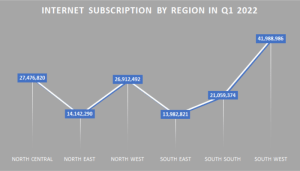 MTN Nigeria, Glo, and Airtel led the list of telecommunications firms with the most internet customers in March 2022, with 55.9 million, 55.4 million, and 75.2 million subscribers, respectively.

The economic significance of internet popularity

Even if Nigeria’s economy is improving as more people go online, there are still many people in cities who need to learn about mobile internet since they utilize it for a variety of purposes. According to the BusinessDay Research and Intelligence Unit (BRIU) experts, 81 percent of Nigerians do not have internet connection. Only 6.6 percent of rural residents and 16.4 percent of city dwellers have access to high-speed internet.
However, the growing number of Nigerians who utilize the internet is excellent news for the country’s economy. It has encouraged business activity in all regions and sorts of businesses, including e-commerce.

Even a tiny corporation can collaborate with a global workforce and a supply chain that covers different regions of the globe. Many organizations have benefited from the internet’s capacity to increase productivity.

Furthermore, the internet’s popularity has provided several career prospects for the majority of Nigerians. With the development of ride-hailing applications like Uber, Bolt, and even dispatch riders, the transportation industry has taken a new turn. Engineers, sales and customer service representatives, and others who supply products and services over the internet are also employed by internet corporations.

As more people connect to the internet and to one another, new technologies will continue to alter the landscape of what is conceivable. This transition is already visible in a variety of technology and networking trends.
To ensure regional equality, more should be done to reduce regional disparities and bring the rural population up to speed with the metropolitan population.

Nigeria’s retail industry is on promising path of growth – Izuchukwu