Where COVID 19 affected contributory pensions in 2021

The nation’s pension industry has witnessed a turnaround in the last decade, emerging from a point where the contributory pension scheme was less than N2 trillion to over N12 trillion today, and that gives retirees some relief on their livelihood after service. While the amount contributed to the scheme thus far is encouraging, the disruption of economic activities by COVID 19 and high inflationary pressures in no small measures affected the pension industry.

Among other reasons, the pandemic exacerbated the unemployment crisis in Nigeria whereas the rising inflation reduces the purchasing power of the monthly earnings from the scheme. The rising unemployment forced contributors who lost their jobs but could not secure other ones after four mouths to approach their Pension Fund Administrators (PFAs) for withdrawals.
This explains why in spite of the 10 percent rise in the number of complaint firms from 20,264 in 2020 to 22,272 as of August 2021, the number of employees whose pensions were remitted and the total contributory pensions remitted declined by 80 percent and 33 percent respectively in 2021.

This is a reflection of the entire Nigerian economy where the unemployment crisis rose to a record high at 33.3 percent with over 23 million able bodied and willing Nigerians not able to find jobs. In addition, youth unemployment is high with a significant number of experiencing underemployment. Oak Pensions, in its April 2021 Newsletter, attributed the decline in contributory pensions in the last one year to the rising unemployment in the country.

“Pension Fund Administrators (PFAs) are under stress as a result of continuous demands for withdrawals by contributors into the Contributory Pension Scheme, as a result of increased job losses due to harsh economic environment. This situation compelled the National Pension Commission (PenCom) to approve N5.33 billion to enable PFAs provide succour to 11,796 account holders who found themselves out of jobs. The development was attributed to the impact of the COVID-19. 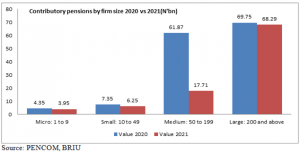 “A total of N5.33 billion was paid to RSA holders under the age of 50 years, who were disengaged from work and unable to secure jobs within four months. The regulator disclosed that similar approval was granted for the payment of N4.31 billion to 8,221 RSA holders who were under the age of 50 years and were disengaged from work but unable to secure another job within four months of disengagement”, according to the release by the firm.

Although the recently reviewed en bloc payment withdrawal is yet to be implemented, the fact that PENCOM reviewed upwards en bloc withdrawal from N550, 000 to N1.7 million, shows the amount of pressures being mounted on contributory pension schemes in the country.

It is interesting to note that the impact of the pandemic is almost similar across the different classes of firms we have in Nigeria. In terms of the number of employees, while the average decline in pension contributions for the nation’s pensions industry in 2021 is 80 percent, micro-enterprises recorded a 73.1 percent decrease in the number of employees enrolled in the scheme this year.

Further, in the last quarter of 2020, PFAs approved the sum of N2.29 million as continent withdrawals.
“Yes, a lot of companies struggled in 2020, and that must have explained the declining pension remittances. And as per the contingent withdrawals, PENCOM allows a contributor to withdraw a portion of their RSA funds to ease one’s financial pressure. It is typical for micro pensions,” a senior pension analyst who pleaded anonymity, said.

Further, pension contributors want improvements in the scheme. According to the survey findings by The Will Nigeria, which took place between April and June 2021, about 70 percent of the respondents wanted access granted to their contribution for specific projects.
“Some countries operate this system and it has helped workers build their own house while in service without waiting for the retirement lump-sum which could be eroded by inflation or impacted by other negative effects”, the online platform said.