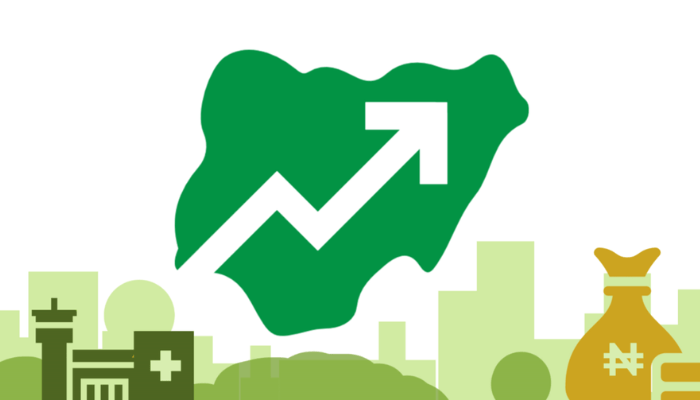 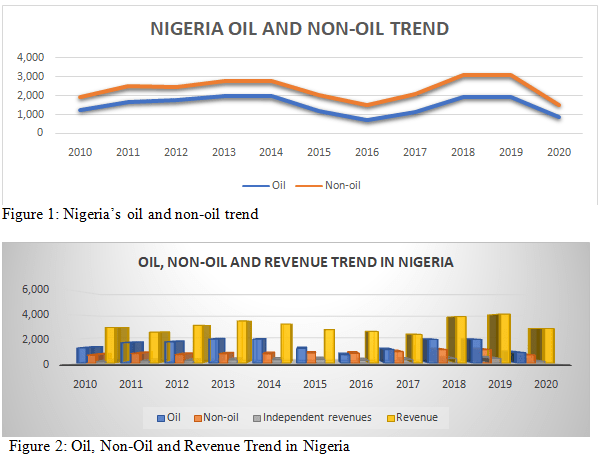 ii. Crude Oil Supply Gluts
The fall in international demand for crude oil and the lifting of the ban on the export of Iran’s crude oil led to a supply glut in the international market, thereby leading to the fall in global oil prices from an all-time high of $114.49 per barrel in December 2012 to $53.77 per barrel on July 30, 2015, and subsequently, to an all-time low of $27.82 per barrel on January 20, 2016. All of these have a transmission effect on both the revenue and the Figures 1 and 2 above show steady growth until 2020, when there was another sharp decline, which was orchestrated as a result of the COVID-19 pandemic. The figures are therefore subject to the general economic events and activities in Nigeria.

Expenditure
Government expenditure refers to the purchase of goods and services, which includes public consumption and public investment, and transfer payments consisting of income transfers (pensions, social benefits) and capital transfers. It can also be described as the cost incurred by the government in running its daily activities.

Figure 3 shows the trend of total expenditure, the figure depicts that total recurrent expenditure has been on increase from 2010 to 2020, followed by total debt and then the total capital expenditure. The implication of this figure 3 is that the government spent a greater part of its expenditure on personnel and overhead costs. The breakdown between these two types of spending is very important. While capital expenditure has a lasting impact on the economy and helps provide a more efficient, productive economy. Recurrent expenditure, however, does not have such a lasting impact. Once the money is spent, it is gone and the effect on the economy is simply a short-term one.

Figure 4 clearly explains a situation where the revenue is less than the expenditure. From 2010 to 2020, we can observe that there has been a continual increase in the budget deficit. It is essential to understand this deficit from the budget angle. What Is a Budget Deficit? A budget deficit occurs when expenses exceed revenue and can indicate the financial health of a country. The term is commonly used to refer to government spending rather than businesses or individuals. The economic implication of a budget deficit is that it will lower taxes and increase Government spending (G), this will increase aggregate demand (AD) and this may cause higher real GDP and inflation.

Figure 5 indicates five fiscal policy variables in percentage, personnel costs overhead costs, recurrent expenditure, debt, and capital expenditure. The recurrent has the highest percentage, which implies that government spend more on payments other than capital assets, including goods and services, interest payments, subsidies, and transfers. The next is the personnel costs, costs that are made up of wages, salaries and employers’ social security costs tend to take the greater part of expenditure from 2011 to 2020. Debt has been on the increase as indicated in figure 5. This explains the fact that Nigeria’s public debt has been going up in recent times. Capital expenditure has the lowest percentage as shown in figure 5. 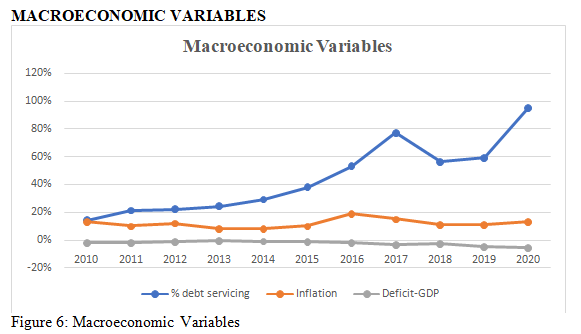 Figure 6 shows some macroeconomic variables such as debt servicing, inflation, and deficit-GDP. It is imperative to look at each of them. Debt service refers to the money that is required to cover the payment of interest and principal on a loan or other debt for a particular time period. The term can apply both to individual debts, such as a home mortgage or student loan, and corporate or government debt, such as business loans and debt-based securities, such as bonds. The ability to service debt is a key factor when a person applies for a loan or a company needs to raise additional capital to operate its business. “Service a debt” means making the necessary payments on it. There has been an increase in debt servicing from 2010 to 2020. However, there was a sharp decline from 2018 to 2019 and another sharp increase in 2020, as indicated in figure 6. The inflation rate trend has been moving in a steady state from 2010 to 2020. The deficit GDP, on the other hand, exhibits a negative trend from 2010 to 2020.
In conclusion, data are critical for the characterization, verification, validation, and assessment of models or trends to ascertain the behaviour of variables. Without adequate data to verify and assess them, many models would have no purpose and variables would have no meaning.