The issue of gender inequality has been extraordinarily diverse and widespread. It can be said to be as old as the existence of mankind. The gap between women and men is obvious in every imaginable way, and thus bridging this gap is a necessary foundation for a peaceful, prosperous and sustainable world.

The whole idea of gender inequality is the idea that men and women are not equal and that gender affects an individual’s living experience. These differences arise from distinctions in biology, psychology, and cultural norms. Some of these types of distinctions are empirically grounded while others appear to be socially built.

The issue of gender inequality that characterized the world at large is caused, especially, through norms and stereotypes. This, however, in turn, reinforces gender identities and coerces the behaviours of women and men in ways that lead to variation.

In Nigeria, as in many other societies, gender relationships are changing and inequalities between men and women are questioned in virtually every sphere – at work, in the home, and public affairs. Yet the cold, hard facts show that gender gaps and inequalities persist, even in the face of remarkable social and economic transformations and strenuous movements to challenge women’s subordination.

Labour force participation rate
Labour force participation rate by sex (% of population ages 15+), that is, the proportion of the population ages 15 and older that is economically active: all people who supply labour for the production of goods and services during a specified period, which is categorized into low income, middle income and high-income groups, females in all these categories scored below the male counterpart aside from the low-income group where the percentage of male in that category account for 77 per cent and female 58 per cent; high income; (female 53 per cent; male 68 per cent) middle income; ( female 45 per cent; male 75 per cent ), according to World Bank 2019 Gender Data. Disaggregated data shows that in 2010, the number of women employed in the agricultural sector stood at 42.8 per cent which fell drastically to 23.8 per cent in 2019, representing a 44 per cent decline. 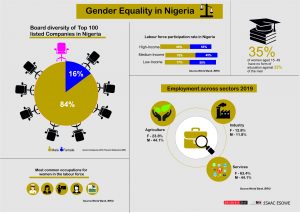 Access to Education
The recent Nigeria’s employment and education statistics for the period ended 2018 reveals gaps between the male and female genders, with females mostly at a disadvantage. For instance, 35 per cent of women aged 15-49 have no form of education, as against 22 per cent of the men. Similarly, most employed women earn less than their husbands do. Within the age category of 15-48, 65 per cent of women have jobs as against 86 per cent of men.

Women in companies board composition
Board composition of the top 100 listed companies on the Nigeria Stock Exchange (NSE) show that 84 per cent and 16 per cent of females made up their board composition for the period ended 2019, according to data extracted by BusinessDay Research and Intelligence Unit (BRIU) from each company’s financial statement. Albeit, corporate governance is all about bringing in the best personalities with varied experience and skills, but the gap that characterized the top 100 listed companies shows a huge gender gap.

How to bridge the gender gap
Insights from Dataphyte advocacy document titled Gender in Nigeria 2020 show that a typical woman and girl child in Nigeria still lacks equal opportunity for personal development as men and boys do. This discrimination incapacitates the girl child and indeed every female from competing for scarce opportunities under the already austere societal conditions. This comes with a grave impact on their health, welfare and capacity for self-help. Hindering women’s access to more rewarding vocations clearly or subtly does not only limit human resource potential but discounts overall economic growth and national development.
The only feasible way to create gender balance is expanding women’s rights, freedoms, desire to get education and work. The resultant effect of this is the perfect cooperation of labour opportunities and harmony in the society as well.