The recent National Bureau of Statistics (NBS) data for the period ended Q2 2020 shows a plunge in the country’s trading balance. Balance of Trade (BOT), that is, the difference between the value of a country’s imports and exports for a given period and is the largest component of a country’s balance of payments (BOP), recorded N1.8 trillion deficit for a combined 3 months period – April, May and June.

That represents a 55 percent decrease over the import of the corresponding period, to stand at N2.22 trillion. When put differently, it means Nigeria is spending more money on imports than it makes on exports, and under the rules of economic accounting it must make up for that shortfall, hence, it will impact negatively on the country’s Gross Domestic Product (GDP), a broad measurement of a nation’s overall economic activity, its exchange rate, its level of inflation and interest rates.

Percentage share of total export
NBS data also shows that crude oil tops Nigeria export commodities. In Q2 2020, crude oil export accounted for 70 per cent (N1.55 trillion). Insight from the data reveals that the value of crude oil export for the reference period is the lowest for the past four years, closer to its value in Q2 2016 which was approximately N1.49 trillion. That was the period the country recorded two consecutive quarters of declining growth, that is, between April and June 2016, the economy contracted by 2.06 per cent, which was as a result of oil production shortages worsened by the decline in the crude oil price. The price of oil fell from $112 a barrel to below $50. 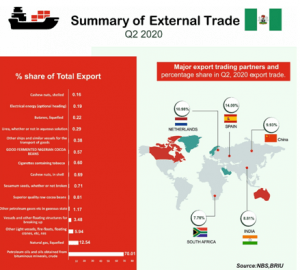 On the other hand, natural gas (liquefied) accounts for 12.54 per cent or N278.42 billion of the shared export. Other light vessels, fire-floats, floating cranes, amounted to N131,84 billion. That represents 5.94 per cent of the total exports for the period; vessels and other floating structures for breaking up amounted to N77.2 billion or 3.48 percentage share of the total exports.

Also, other petroleum gases in gaseous state amounted to N25.9 billion or 1.17 percentage share; while superior quality raw cocoa beans was N17.913 billion or 0.81 per cent; Sesamum seeds, whether or not broken worth N15.75 billion or 0.71 per cent; cashew nuts in shell, N15.29 or 0.69percent; cigarettes containing tobacco, N13.38 billion or 0.60 per cent; good fermented Nigeria cocoa beans, N12.71 billion or 0.57 per cent as well as other ships and similar vessels for the transport of goods which worth N8.54 billion or 0.38 per cent.

Impact of trade deficit to an economy
Nigeria trading profile is little diversified, as the region primarily exports a limited number of raw materials and imports industrialised products and, increasingly, food items. The region relies heavily on extractive products. The raw materials for manufacturing that are shipped overseas for factory production count as an export. The finished manufactured goods are counted as imports when they’re shipped back to the country. The imports are subtracted from the country’s gross domestic product even though the earnings may benefit the company’s stock price, and the taxes may increase the country’s revenue stream.

A nation with a trade deficit spends more on imports than it makes on its exports. In the short run, a negative balance of trade curbs inflation. But over time, a substantial trade deficit weakens domestic industries and decreases job opportunities. A huge reliance on imports also leaves a country vulnerable to economic downturns. Currency devaluations, for example, make imports more expensive, this situation stimulates inflation, as it is currently playing out subtly in Nigeria’s economy. The country’s exports over the period under review declined significantly when compared to N4.59 trillion recorded in Q2 2019, which is approximately N2.38 trillion. The value of the total trade fell sharply by 27.30 per cent in Q2 2020 compared to Q1 2020 and 27.46 per cent compared to Q2 2019

Trade deficit creates a substantial problem in the long run, especially, a struggling economy like Nigeria which is currently in its worst recession since the 1980s, and already burdened with high debt portfolio, and with economy threatened by insecurity which is on the rampage, the impact of this deficit will facilitate a sort of economic colonization, that is, an economic system where the citizens of other countries acquire funds to buy up capital in this nation. That can mean making new investments that increase productivity and create jobs. However, it may also involve simply buying up existing businesses, natural resources, and other assets. If this buying continues, foreign investors will eventually own nearly everything in the country, and that is how severe it can be.