Mobile internet subscription: The winners in the second quarter of 2019

The competition within the telecoms sector manifests in different ways, with particularly reference to the time the national regulator, the Nigerian Communications Commission (NCC) allowed mobile users in the country to port to any network of their choice. The migration by mobile internet users across networks should be seen as a subtle way they express the destinations where they could get value for their money.

From another perspective, it could mean that the network providers are not communicating their offering well enough or the rendering of their services has not been done using the appropriate technologies. In effect, internet users could not migrate from a network to another without a valid reason.

It is interesting that Nigeria as country has continued to witness growth in mobile internet usage for over a decade, the data sourced from NCC and the nation’s databank, the National Bureau of Statistics (NBS) corroborate this claim. In Nigeria, mobile internet subscription rose by 5 percent from 116.31 million active internet lines in March 2019 to 122.7 million by June 2019. Further analysis shows that MTN Nigeria gained the most as it outshined the national average growth of 5 percent during the period.

The rising internet usage is a welcome development for many reasons. First, it is bound to enhance the efficiency of the cashless policy of the Central Bank of Nigeria (CBN). Second, the coming on board of super agent banks also stands to benefit immensely from the increasing internet usage in the country. Overall, it will boost Nigeria’s economic development.

According to the World Bank Report published in 2016, increasing internet usage could help boost economic development through reduction in the costs of transactions. One, internet usage helps reduce information problem in the sense that a mutually beneficial transaction might not take place because the parties do not have enough information about the transaction. Second, the emergence of e-commerce has made it possible for SMEs to find customers, and third, it expands the market for economic agents.

“For many internet-based businesses or services, fixed up-front costs can be high, but once the online platform is in place, each additional customer, user, or transaction incurs very little extra cost. The marginal transaction cost essentially drops to zero because what previously involved routine human labour can now be fully automated”, The World Bank stated in its World Development Report 2016.

Going by the available data, Nigeria’s telecoms market leader, MTN Nigeria, added 5.62 million new subscribers to its network in the second quarter of 2019. This implies that for every 10 new mobile internet subscribers that joined the mobile internet platform between April and June this year, eight preferred MTN Nigeria data services to others.

Airtel Nigeria added 732,076 new mobile internet subscribers in the second quarter of 2019, which resulted in a two percent growth rate in its subscriber base that rose to 32 million in June, up from 31.2 million in March this year.

9Mobile network remains the laggard in the sector. Its dismal growth of negative 6 percent resulted in 602,840 subscribers abandoning its network in the second quarter of 2019. Similar trend was observed in the voice subscription as earlier published by BusinessDay Research. 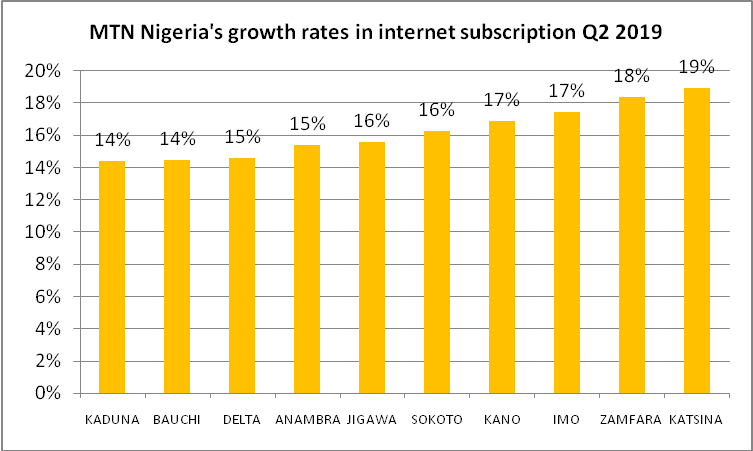 On a state by state analysis, MTN Nigeria recorded double digit growth in internet subscription in 30 states in the second quarter of this year. Katsina, Zamfara, Imo, Kano, Sokoto and Jigawa states recorded the highest growth rates in mobile internet subscription between 16 percent and 19 percent. The momentum varied across other states.

The least growth rate as recorded by MTN Nigeria took place in Kogi, Ondo, Edo, Oyo, Benue, Enugu, and Ebonyi states where the growth momentum was between 7 percent and 9 percent during the period. 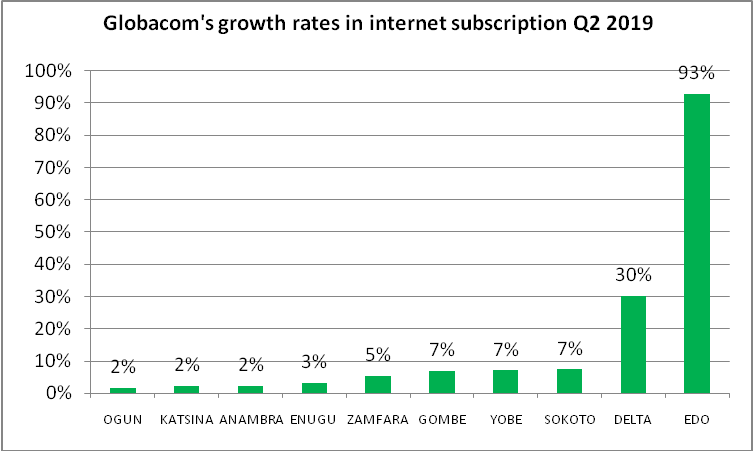 Also, Globacom internet subscribers increased by 5 percent in Zamfara State during the second quarter of 2019. Growth rate was 3 percent in Enugu; 2 percent each in Anambra, Katsina, and Ogun. In states such as Ebonyi, Jigawa, Imo, and Lagos, Globacom managed to increase its subscriber base by just 1 percent each. Globacom could not withstand the competitive landscape in 23 other states where its subscriber base declined by as low as 1 percent and by as much as 8 percent. 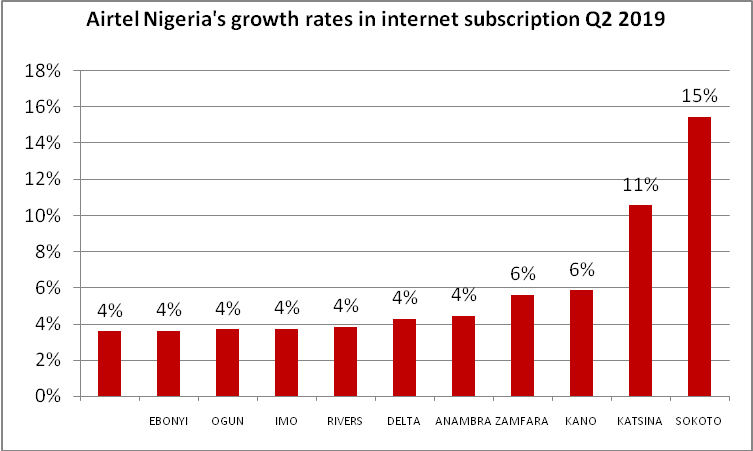 Airtel Nigeria’s strongest growth was in Sokoto State where it posted 25 percent increase in its subscriber base in the second quarter of 2019.  It recorded 11 percent growth in mobile internet subscriber base in Katsina State also during the reference period.

The growth moment for Airtel Nigeria slowed down in other states as it only recorded 6 percent growth rate each in Kano and Zanfara states. It posted 4 percent growth rate in Anambra, Delta, Rivers, Imo, Ogun, Ebonyi and Abia states; 3 percent increase each in Akwa Ibom, Yobe, Lagos and Bauchi states while it remained almost flat in other 12 states.

Fighting unconventional enemies conventionally is not a piece of cake