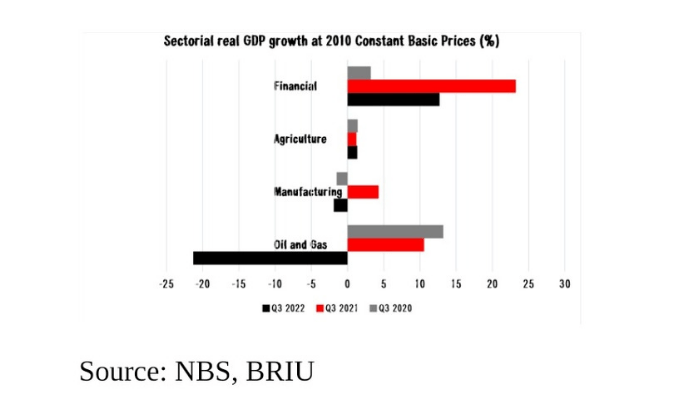 With rebasing in 2013, Nigeria pivoted to the top economy in Africa, leaving South Africa in a distant second. The contribution of the agricultural sector, financial sector, manufacturing sector and trade sector to the country’s Gross Domestic Product (GDP) increased revealing the sector’s true value. This gave room to the emergence of arts, entertainment and recreation, public administration and professional, scientific and technical services sectors.

Nigeria’s GDP base year from 1990 to 2010 affirmed the country’s position amongst largest economies in Africa. The country’s GDP experienced an 89 percent growth and was worth US$510 billion providing an in-depth insight to the economy.

Other highlights of Nigerian GDP after the rebasing included a more diversified economy than before. Prior to 2013, the agricultural sector consisted of 33 percent and the service sector comprised of 26 percent. With the results of the new GDP rebase, agriculture represented 22 percent and the services sector which includes communication, Finance, Insurance, Arts and Entertainment, Real Estate, Public Administration, Education and Health Services accounted for 51 percent of the GDP.

GDP is typically measured against the performance of an economy in a ‘base’ year. Every time GDP is calculated, sample businesses in certain sectors are observed to see how fast they grow, and the weight of a sector in this calculation depends on its prominence in the economy in the base year.
The United Nation’s Statistical Commission recommends that the rebase for countries’ GDP is done every five years. However, Nigeria’s first rebase from the year 1990 was changed to 2010, a twenty-year gap and has not been changed since for almost eight years. Although, an ongoing process is in the planning to change the current 2010 base year to 2018/2019.

The shock impact of the COVID-19 pandemic hit the industry hard, resulting in a significant reduction in demand for products. The sector recorded a 5.9 percent contribution total real GDP in Q4 2020, down 19.8 percent from the previous quarter’s contribution of 7.32 percent and in Q1 2021, the oil sector’s contribution to the country’s GDP increased to 9.3 percent.

In a recent publication by National Bureau of Statistics (NBS), the Q3 2022 real growth contribution of the oil sector was down 22.7 percent year-on-year indicating a decrease of 11.94 percent relative to the rate recorded in Q3 2021.

Manufacturing Sector
The Manufacturing sector is comprised of thirteen activities: Oil Refining; Cement; Food, Beverages and Tobacco; Textile, Apparel, and Footwear; Wood and Wood products; Pulp Paper and Paper products; Chemical and Pharmaceutical products; Non-metallic Products, Plastic and Rubber products; Electrical and Electronic; Basic Metal and Iron and Steel; Motor Vehicles and Assembly; and Other Manufacturing.
In 2020, Manufacturing activities were halted and employment stood really low due to the restrictions from the pandemic.

Despite the events of the previous year, the Manufacturing sector’s real GDP turned positive in Q1 2021 at 3.4 percent, leading overall growth of the non-oil sector by 0.79 percent. This is coming after three consecutive quarters of negative growth since the last growth in Q1 2020 at 0.4 percent, marking the highest growth recorded since Q1 2018. In Q3 2022, real GDP growth in the sector was down 1.9 percent (year-on-year), lower than the same quarter of 2021 and lower than the preceding quarter by 6.20 percent and 4.91 percent respectively.

Financial sector
In 2020, the Financial and Insurance Services sector’s contribution to real GDP was 3.8 percent, lower than the contribution of 3.8 percent recorded in the first quarter of 2020 by 0.04 percent. Quarter-on-quarter growth in real terms stood at 5.8 percent.
During the early phases of the pandemic, there was a clear correlation between the scale of the pandemic and financial and stock market volatility. The drop-in market indices were primarily due to the pandemic, which had a significant impact on businesses and financial markets, culminating in an unanticipated economic crisis and a flight to safety, and the banking industry, despite being only indirectly affected, saw a significant impact on its operations and revenue-generating activities. For Q3 2022 growth in this sector in real terms totalled 12.70 percent, lower by 10.53 percent from the rate recorded in Q3 2021 and down by 5.8 percent from the rate recorded in the preceding quarter.

This analysis proves that certain sectors have massively changed since the rebasing in 2013 and with a new GDP rebase, the real GDP contribution of many sectors can be re-evaluated to check for improvements.