Analysing the sources of growth in Consumer Price Index

In February 2022, the National Bureau of Statistics, (NBS) released a report on the Consumer Price Index, which showed that the annual inflation rate in Nigeria was 15.70 per cent on a year-on-year basis.

Some of the components of the current CPI are food and non-alcoholic beverages, alcoholic beverages, tobacco and kola, clothing and footwear, housing, water, electricity, and gas, furnishing and household equipment, health, transport, communication, recreation and culture, education, restaurants and hotels, and miscellaneous goods and services.

Consumer Price Index is very essential as the metric that shows time change in prices of various goods and commodities which are essential in an average home, both in the rural and urban areas. On a month-on-month basis, the headline index showed a decrease of 0.25 per cent in February 2022, compared with the rate recorded in January 2022. 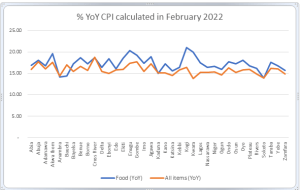 On a month-on-month basis, the states that were responsible for food inflation across the country were Nasarawa with 3.10 per cent, Ekiti with 2.96 percent, and Sokoto with 2.81 per cent, whereas the states with lowest rise was Zamfara which had a constant growth, while both Anambra and Akwa Ibom states yielded growth of 1.35 per cent.

On a year-on-year basis, the all-items inflation across the nation showed the highest rise in Cross River state by 18.84 per cent, Gombe by 17.70 per cent, and the Federal capital increased by 17.68 per cent, while the slowest rise in inflation occurred in Kwara with 13.82 per cent, Sokoto with 13.93 per cent, and Anambra state with 14.43 per cent.

The surge in prices can be related to the upsurge in transportation cost, which is as a result of the fuel scarcity currently happening in the nation. Some commodities are transported now at a much higher cost while some are not even conveyed at all due to other factors. Either way, this has led to a hike in food prices at the market space.

Some of the inflation of prices can also be attributed to the insecurity along the roads of Nigeria, and also with the fact that some farms, and food production units cannot be accessed easily.

In the next month, and for some time after, there will be a higher inflation on the prices of food products, especially perishable food items which are preserved with much reliance on power supply. This is so because due to the power failure that has been reoccurring in the nation, there is yet to be fully restoration of power supply. Smallholder famers who could not provide alternative ways of preservation will be the losers during this time of national grid collapse.

On a month on month basis, the average annual rate of change in food index from for the twelve-month period which ended February 2022 from the previous twelve-month stood at 19.69 per cent which is 0.40 per cent lower than 20.09 per cent in January 2022.
On a month-on-month basis, the all-items inflation was highest in Adamawa State by 2.75 per cent; Cross River State by 2.61, and Enugu State by 2.40 per cent. However, the states with the slowest movement in inflation for the same category were Zamfara, Akwa Ibom, and Rivers State, which recorded growth in the region of 0.16 per cent, 1.09 per cent, and 1.14 per cent respectively.