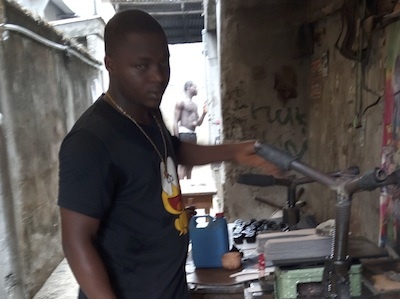 February 12, 2019. It is a sunny Tuesday morning at Imo Avenue, one of the several leather clusters in Aba, the industrial capital of Abia State.

Christian Nnajiaku is cutting leather and fabrics into shape. He has been in this business for more than 15 years, so he understands shoe-making as a lion knows its prey.

To produce a pair of shoes, a shoemaker needs processed leather, adhesives, fabrics, nails, dye, heel, fittings, decorative items, and finishing materials such as polish, lacre and waxes. And Nnajiaku has all of them.

As chief executive officer of the small-scale Chris-Kenzy Industries, he calls the shots and ensures that customers get value for their money.

He handles the cutting process, but his neighbour, Agapitus Mmadu, does the stitching with a manual sewing machine. As in a typical manufacturing setting, there is division of labour. The sewing machine used by Mmadu costs about N40, 000, but a sophisticated electric one is five times the price. Yet, he is not perturbed as this is what he can afford now.

Stitching is over and it is time to set the shape of the toe box and heel counters. Amaechi Okoye, a young man in his thirties, handles this process with a machine fabricated locally in the industrial city. He uses coking stoves to get the shoes into shape, unlike in a modern shoe plant where a thermoplastic machine heats the counters inside the toe and heel. But there is little Okoye can do. In fact, he has come to see his manual machine as an old wine that tastes better with age. He employs two young men in their 20s and has two others as apprentices.

Nnajiaku takes back his shoes and begins the sole and leather assembly process. But this time, he is assisted by his two staff members who themselves have mastered the art of shoemaking. It is a simple process that involves using a steamer to soften the shoe uppers. Then cementing starts and lasts for 20 minutes. After this process, wheeling begins.

This time, it is handled by another man who is vital in the entire production value chain. Success Ebere J. Hebert is a pastor but this has not prevented him from doing something he loves most. He uses a locally fabricated machine to smoothen soles. The machine cost him N15, 000 two years ago, but an electric type sells at over N130,000. He spends at least 20 minutes on a pair of shoes but electric machine ‘wheels’ 12 pairs in three minutes.

The process has not ended. There are others responsible for pressing. The pressing process compresses the bottom, sides, heel of the sole and upper together. At this stage, the shoes now take shape, but they still need to be ‘finished’.

Finishing shoes is the last stage, but it is sometimes seen as the most important. It means ensuring that the shoes are smooth, consistent and wearable.

“If you finish your shoes badly, you won’t be able to sell,” Nnajiaku tells this writer in Aba.

The industry is big

The Aba shoe industry is made up of clusters such as Powerline, Imo Avenue, Bakassi, Aba North Shoe Plaza, Omemma Traders and Workers, ATE Bag, and Ochendo Industrial Market, comprising input suppliers, among others.

These are places where Nnajiaku, Okoye, Mmadu, Hebert and thousands of others get their daily bread. Data show that there are over 80,000 shoemakers in the industrial city who produce one million pairs of shoes and slippers each week. All together, they make 48 million pairs every year at an average price of N2, 500, putting the market size at N120 billion, BusinessDay calculations show. This means the industry can feed 200 million Nigerians for one day (at N600).

Nnajiaku specialises in women’s shoes and makes 30 pairs each week. Three months before, he had got a contract from a secondary school in Owerri, a neighbouring Imo State capital, to produce 150 pairs at N2,500. He had been paid N375,000 and he made a profit of N120,000.

“There is money in shoemaking but you need to know your onions,” he says. “Your products must be seen as top quality,” he adds.

Leaving Nnajiaku’s small factory, I enter Sam Okenna’s. He is a middle-aged shoemaker who knows his onions. But he seems in a hurry. He is shouting at the top of his voice and has no time for frolic. On enquiry, I am told that he just got a contract from a South African school through a Nigerian representative.

He must produce 1,200 pairs of shoes in one month. Failure to do so will deny him of further contracts.

It has been a good business. His client pays him N2, 300 for a pair of shoes. So, he will make N2.760 million in revenue if he completes production within the stipulated time. If he fails, getting his money will take him another two months.

“Drive the nail into the sole, fast. Don’t be lazy,” he shouts at one of his three staff members, named Obi.

“Joy, allow the glue to dry. I don’t like the way you work. You have been with me here for eight months, yet you are still sluggish,” he barks at a female apprentice, who is desperate to become a shoe exporter.

His supply contract is one of the best things that have happened to him.

He stands to rake N960,000 in profit if he is faithful to his South African customer.

Okenna has no registered business name, though he tells friends and patrons that he is the managing director of O’ Sam Enterprises. Yet, he gets contracts because he is skilful. 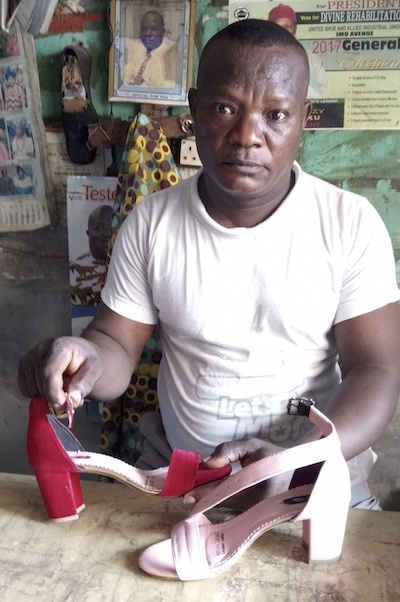 Francis Goldman, who has lived in Nigeria for 12 years, is moving round Aba this Tuesday afternoon. His group consists of four traders from Spain, who are looking for new shoe designs.

“Apart from that, they are also looking to see if we can give them the exact Spanish designs they have in their bags,” Onyeka Onyenweaku, another small-scale shoemaker, tells me on enquiry.

That Aba is a foreigners’ haven is better seen than told.

Traders from West African neighbours storm the industrial city every week to buy different product designs, just as Southern African schools place orders directly from the shoe makers or indirectly via their representatives.   Canadians, Europeans and the Chinese are also in the party, placing orders themselves directly or through their Nigerian proxies, BusinessDay was told in Aba. However, shoemakers do not earn foreign exchange as they are paid in naira.

Online shops are on

It is no longer business as usual as many shoemakers now sell their products online through platforms such as Gada Africa, Jiji.ng and abanaijamade.com.ng, among others. These platforms handle marketing and distribution of shoes, including belts and trunk boxes. They take 20 to 50 percent as commissions.

The government steps in

The Nigerian Prisons bought more than 50,000 pairs of shoes from Aba in 2017, apart from direct orders from Aisha Buhari, Nigerian president’s wife, for the supply of thousands of pairs to school children in internally displaced persons (IDPs) camps in the North East. These government agencies used to import footwear from China, Italy and Spain.

But raw materials are scarce

It is not all ‘uhuru’. Before Nnajiaku of Chris-Kenzy Industries started the production process, he had to buy goat and sheep skins. Original goatskins cost $2 to $5 per square foot in the global market. But they are hard to come by. They are locally available and ordinarily should be easy to acquire from local Fulani herdsmen. However, the herdsmen sell mostly to tanneries which process them for export. This is purely a business case, but shoemakers feel it is putting them on the spot.

“We go to China to buy what we have here,” Nnajiaku says.

“Unfortunately, what we get in China is inferior synthetic leather,” he adds.

Synthetic leather costs N300 to N400 (around $1) per square foot, findings show, but no one produces high-quality pairs with that.

Nnajiaku is not the only one who feels that Nigeria’s penchant for exporting raw materials is killing local industries.

“What happens is that the tanneries in Kano and Kaduna process animal skins and sell them as leather in the global market, earning foreign exchange,” says Chinatu Nwagbara, coordinator of Made-in-Aba Project, who produced shoes for Olusegun Obasanjo, former Nigerian president, in 2016.

“It is good to earn foreign exchange, but what impact does that have on local industries using the products as raw materials?” he asks.

Italy, Spain and China are the biggest buyers of Nigeria’s leather (animal skins) because they use it to produce high-quality, expensive shoes. Similarly, the Netherlands, Spain, and many European countries are biggest buyers of cocoa, which they process into chocolates and tea.

“Requests come to us every day, but we cannot meet up because we don’t have money to buy good machines,” Ken Anyanwu, secretary of the Association of Leather and Allied Industrialists of Nigeria (ALAN), who produced shoes for the Nigerian Armed Forces in 2016, tells me.

More so, lending rate to the manufacturing sector averaged 22.21 percent in 2018 and 22.84 percent in 2017, according to a recent survey by the Manufacturers Association of Nigeria (MAN).

Nigeria’s monetary policy rate (MPR), which is a benchmark interest rate in the country, is 13.5 percent. Deposit money banks lend as high as 25 to 35 percent, according to BusinessDay checks.

Kenyans now borrow at an interest of 13 per cent (as against from 13.5 percent earlier) in line with the interest rate capping rule that limits lending rates to four percentage points above the CBR.

In October 2017, the central of Ethiopia raised its benchmark interest rate to seven percent from five percent.

At least the benchmark interest rate of most SSA countries have remained single digit, barring few, meaning that it is cheaper for businesses to access funds there than in Nigeria.

Bismark Rewane, CEO of Financial Derivatives Company, has been consistent on asking the CBN to cut rates to aid economic recovery for a country that just exited recession.

“This is only a half-truth,” Ozuora Ikem, chief executive of United Shoes, says.

“We cannot afford their collaterals,” he adds.

MAN, an association of over 2,000 companies, says only a single-digit funding plan can spur industries like Aba. It also wants the government to earmark more cheap funds for manufacturing. 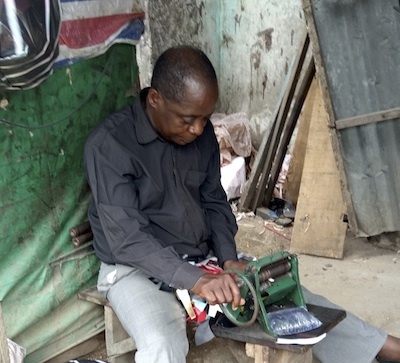 Many shoemakers in Aba do not have business plans and are not registered at the Corporate Affairs Commission. In fact, there is no record of export done by these manufacturers.

“We need to have even proper physical structures in Aba,” Nnajiaku demands.

“Ariaria is not an organised market. Government needs to step in and make it a cynosure of all eyes,” he recommends.

Bakassi, one of the leather clusters, is often seen as an eyesore during the rainy season. It is wet , muddy and grubby.

“Aba generally lacks adequate road infrastructure, “one of the shoemakers, who does not want his name published, says. “We need to attract big shoemakers, but they will look at your infrastructure and doing business numbers before coming,” he adds.

Aba is powered mainly by individually-owned energy-generating sets. Many of them have two to three in their small spaces. It is expensive to run a business with generators, as it wipes off some of profits, experts say.

Geometric Energy is set to berth in Aba to power the industrial city and shoemakers are excited. However, this news has been on for two years now.

“The tendency is that you can now produce more at a cheaper rate, because one of the biggest and important inputs for every production is power,” he says.

No record of royalty payment by 25 firms exporting minerals – RMAFC

It is time to export rather than import, experts tell Nigerians