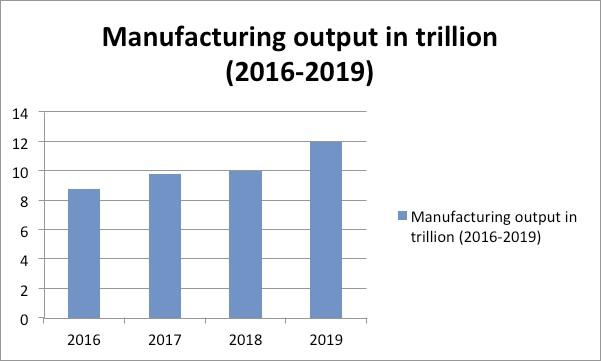 This represents a 20.1 percent growth in output in 12 months. However, when compared with the 2016 output of N8.78 trillion, the number represents a 37 percent increase.

MAN attributes the rise in output in 2019 to high volume of activities in some sub-sectors on account of border closure and the relative tranquility in the forex market.

Output from food, beverages and tobacco totalled N4.99 trillion in 2019 as against N3.33 trillion of 2018, indicating N1.66 trillion increase over the period. Companies in the food, beverage and tobacco which achieved the feat in 2019 included: Flour Mills of Nigeria, De-United Foods, Nigerian Breweries, Honeywell, Guinness, and Cadbury, among others.

In the domestic and industrial plastic industry, the value of production was N348.64 billion in 2019, a little lower than N348.73 billion recorded in 2018. Companies which achieved the feat were Asia Plastic Industries, Lotus Plastics, Bally Plastics, Eva Footwear, Great Wall Footwear and West Africa Rubber Products, among others.

Also, the value of production in chemical & pharmaceutical group stood at N533.1 billion in 2019 as against N710.42 billion recorded in 2018, thus representing N176.9 billion decrease over the period.

Some of the companies in this sub-sector that achieved the performance were: Indorama Eleme Petrochemical, SKG Pharma, Fidson Healthcare, May& Baker, among others.

The closure of Nigeria-Benin Border in August 2019 favoured some manufacturers as it raised patronage of their products. Many firms in the palm/ vegetable oil industry such as PZ Wilmar, Okomu, Presco and De-United confirmed that it ramped up sales and raised their profits.

“Lots of rice farmers are increasing their production areas because there is a huge market for paddy since the border closure,” said Aminu Goronyo, national president, Rice Farmers Association of Nigeria, in a telephone response to questions.

However, it was a challenge for many manufacturers who needed to import inputs or export finished goods.

Okhai Ehimigbai, export manager at Aarti Steel, which exports steel products and zinc ash, said in January 2020 that his company had stopped export to the Economic Community of West African countries (ECOWAS) due to the closure of the border.

“We can’t export because we can’t get all the  containers on time,” he said.

However, with COVID-19, many country has limited access to import and export business, piling more pressure on Nigerian manufacturers who stopped export in 2019 due to the closure of Nigeria-Benin border.

Similarly, the foreign exchange was stable in 2019, with some manufacturers rushing to the FX market and cutting their local input sourcing, according to MAN. However, with COVID-19 cutting oil prices in the global market, Nigeria’s earnings from oil has declined by over 40 percent since COVI9-19 lockdown in March, creating an FX crunch worse than 2016.