The Honourable Minister, Ministry of Mines and Steel Development, Federal Republic of Nigeria, Arc. Olamilekan Adegbite on Thursday 19th March 2020, laid the first stone for the commencement of construction of the Segilola Gold Mine in the communities of Odo-Ijesha and Iperindo in Osun State.

In his keynote address, The Hon Minister, emphasised on the importance of the kick starting of the mining sector in Nigeria which had been earmarked as a key sector to grow the economy. The Honourable Minister assured that the Federal Government was committed to supporting companies in the sector and hailed the project, which is being built by Canadian listed gold developer, Thor Explorations, through its wholly owned local subsidiary, Segilola Resources Operating Limited, as a pioneering project in the Nigerian Mining Sector.

His Excellency, Governor Gboyega Oyetola was represented at the ceremony by Hon. Oluwole Oyebamiji, Secretary to the State Government who delivered a Goodwill Address from His Excellency The Governor. In his address, he stated that;

“Osun State Government is an ally on this project and we are happy to give every support to see it to fruition.”

He gave further reassurance that the Government of Osun State would deploy all the necessary resources to nurture the Segilola Gold Project to maturity so that the State’s promise to make The State of Osun the commercial hub of the South West, especially when it comes to solid minerals, would be realized.

Kayode Aderinokun, gave a colourful speech on the background of the project, detailing its history from as far back as the 1940’s.

In his address, Segun Lawson, MD and CEO of Thor Explorations explained that this was a significant milestone for the Company, for Osun State and for Nigeria. He emphasised on Thor’s dedication to build a world class project adhering to first class international standards.

He stated: “The Segilola Gold Project is being built to process 650,000 tons of ore, with a target production of approximately 80,000 ounces per year from next year.

“It is a first of its kind in Nigeria, a country still in its infancy in terms of mining, but with significant geological and mining potential.

“The benefits of successfully building and operating the Segilola gold project would be a clear demonstration to the global mining industry that Nigeria is a jurisdiction where world class mining projects can be implemented.

“The socio – economic impact of this project is going to be significant, particularly for the local communities, subsequently for the state and ultimately for Nigeria.

“It is a project scheduled to operate for 24 hours a day and for 365 days per year. The project will create over 400 direct jobs and over 1,000 indirect jobs. It will kick start an additional stream of non-oil revenue for the country and trigger an influx of mining investment to the country.”

It is to be noted that the EPC Contract for the project was awarded to NORINCO INTERNATIONAL LTD who are building the project on a turnkey basis and the project was majority financed by the Africa Finance Corporation who became a 10% shareholder of Thor Explorations last year as part of a multilateral US$78 million dollar finance package it provided to ensure the project was fully funded through construction to production.

Segun Lawson gave further thanks the State of Osun and His Excellency Governor Oyetola, for creating an enabling investing environment; The local communities who continue to act as excellent hosts; The Federal Ministry of Mines and Steel Development and the Honourable Minister for their continued support; and the Africa Finance Corporation for their dedication and vision to see the Segilola Gold Project get realised as well as their support for the mining sector in Nigeria. 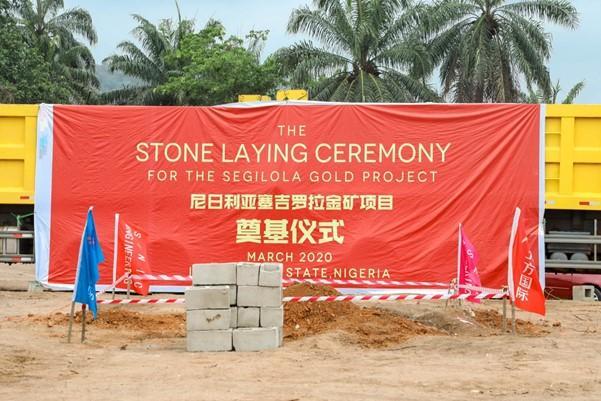