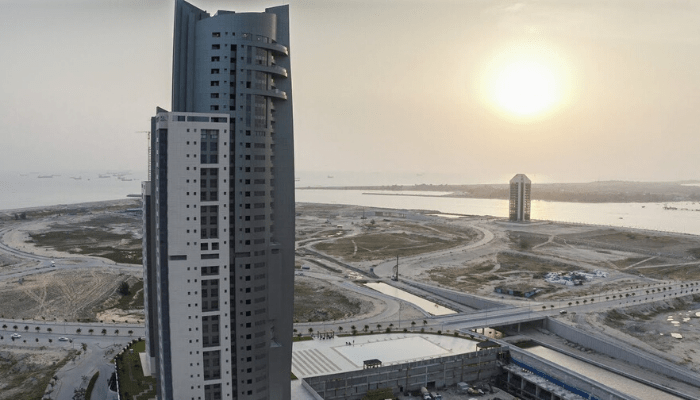 Eko Atlantic’s commitment to becoming the first green city in Lagos has earned it the Excellence in Design for Greater Efficiencies certification (EDGE) from the International Finance Corporation (IFC), the real estate company has said.

Standing on 10 million square metres of land, Eko Atlantic City was able to secure the certification from IFC, a member of the World Bank Group through Alpha1, the City’s flagship office tower. The commercial property now holds the record as the first building in the city to secure the EDGE certification.

Completed in 2016, the City’s pioneer office building was awarded the green status certification for its fulfilment of IFC’s criteria to reach the minimum standard of using 20 percent less resource intensity in energy, water, and embodied energy in materials.

According to Ronald Chagoury, Jr, Vice Chairman, South Energyx Nigeria Ltd, the planners and developers of Eko Atlantic, they are determined to build a green city, one that is future-ready.

“By encouraging developers to construct resource-efficient buildings such as Alpha1 has done, we have a unique opportunity to create an eco-friendly city that will have a high percentage of green buildings that have been certified to standards such as EDGE. This means that Lagos State will raise the bar and usher in a new era in the development of green cities,” Chagoury said.

EDGE certification has become a worldwide trend with nearly 9 million square meters of floor space certified to date. The estimated energy savings are over 360,000 MWh per year, with over 9.5 million m3 of water per year and over 206,000 tCO2 of carbon dioxide per year, among other benefits.

“The market potential for green buildings in emerging markets is estimated at $24.7 trillion by 2030, according to IFC’s recent report, Green Buildings: A Finance and Policy Blueprint for Emerging Markets,” Marcene Mitchell, IFC’s Global Head for Climate Strategy and Business Development, who leads the EDGE program said.

According to Mitchell Eko Atlantic’s encouragement of EDGE certification for its properties validates the opportunity for green buildings in Nigeria and “demonstrates their understanding of the importance of pursuing a more low-carbon path.”

By receiving the EDGE certification, Alpha1 joins a line-up that includes Cornerstone Towers (Lagos, Nigeria), Atlantic Tower (Accra, Ghana), and Citra Towers (Jakarta, Indonesia), among many others. So far, in Nigeria, 370 homes have been EDGE certified with over 2,010 tCO2 of carbon dioxide to be eliminated per year.

According to OlawaleOpayinka, MD/CEO, Eko Development Company, a real estate company dedicated to creating luxury residences of the highest specification, the City is destined to be West Africa’s new financial centre.

Deregistration of parties an affront on Nigerians – ANN

COVID-19: What a viable mortgage industry can do when economy is in crisis

800 properties worth N146bn in Dubai linked to Nigerian political elite

COVID-19: What a viable mortgage industry can do when…