Benue State, named after the Benue River, was formed from the former Benue-Plateau State in 1976. The nation’s acclaimed food basket, is a rich agricultural region with produce like yam, rice, guinea corn, flax, beans, cassava, sweet-potato, maize, soybean, sorghum, millet, sesame, cocoyam, groundnuts and palm Tree. The state accounts for over 70% of Nigeria’s soybean production as well as boasts of one of the longest stretches of river systems in the country; with great potential for a viable fishing industry, dry season farming through irrigation and for an inland water highway.

As one of the Middle Belt states in Nigeria with 23 local government areas (LGAs) and a population of about 4,253,641 in 2006 census, Benue state is predominantly inhabited by three major ethnic groups with diverse tribes and languages. The state’s capital Markurdi, being a river port, attracted the establishment of trading depots by companies such as UAC and John Holt Limited. The state thus, possesses potential for the development of viable forest and wildlife reserves.

A pronounced feature of the recorded violence in Benue in the months preceding and surrounding the 2011 elections is the prominence of targeted attacks and assassination attempts by unknown assailants on prominent politicians. While not unknown in other states in Nigeria, Benue appeared to witness a dramatic increase in targeted assassination attempts during this period.

There were 2,390,884 registered voters; 1,110,607 votes were valid out of 1,139,361 votesthat were cast, yielding 48 per cent voter turnout. Although Gabriel Suswam of the Peoples’ Democratic Party with 53.19% of the total votes won the 2011 gubernatorial election as he did in 2007, there were tussles between the parties of the state government. He stayed in office for a total of 8 years from 2007. Steven Ugbah from the Action Congress of Nigeria amassed 44.96% of the vote as the runner-up while others had comparable low votes.

The Independent National Electoral Commission (INEC) declared the governor-elect of the All Progressive Congress (APC), Samuel Ortom, as the winner of the Benue gubernatorial election that took place on the 11th of April, 2015; with 422,932 votes as against Peoples Democratic Party (PDP) Terhemen Tarzoor, who polled 313,878 votes as runner-up.

Ortom who resigned as Minister of State for Industry, Trade and Investment in October, 2014 to contest for Governor of Benue State on the platform of the Peoples’ Democratic Party switched to the APC when he couldn’t clinch the PDP ticket.Emmanuel Jime, the man who the APC governorship ticket was taken away from and given to Ortom proceeded to court to challenge the emergence of Ortom as APC candidate but stepped down his case after consultations and reconciliations. Immediately Ortom emerged winner, Tarzor congratulated him on his victory.

Benue state comprises of 23 LGAs and 14 political parties each of which conducted the gubernatorial election at respective polling units for the different candidates. The All Progressive Party(APC) which  is the result of an alliance of Nigeria’s three biggest opposition parties – the Action Congress of Nigeria (ACN), the Congress for Progressive Change (CPC), the All Nigeria Peoples Party (ANPP) – and a faction of the All Progressives Grand Alliance (APGA) – merged to take on the People’s Democratic Party (PDP). With a total 1,893,596 registered voters, 754,634 were accredited, 703,131 votes were cast out of which 683,264 votes were valid; leading to 19,867 votes that were rejected. APC won in 12 LGAs in the state with 54.73% of the total votes cast but was unable to capture the remaining 10 LGAs which PDP took a handful 44.45% of the total votes in the states. This consequently, gave Samuel Ortom victory despitethat candidate from other parties strived with him but with margins incomparable.[5]

Note: the margin with “-“indicates when PDP leads her counterpart APC.

APC has the highest vote in Gboko local government area with a massive 55,002 votes as against the contending party PDP with 17,042 votes leading with a huge margin of 37,960.The least polled votesof 5,850 for APC and 3,571 for PDP were garnered in Agatu and Tarka local governments respectively with margin ratio of 11,317:9,182 respectively.

APC and PDP polled 99.18 per cent of the total votes out of which APC polled 54.73 per cent. The party with the least votes are UPP, UDP, KOWA and HOPE with 0.03 per cent of votes.

Of the 23 local government areas in Benue state, Samuel Ortom of the APC won in 12 – Gboko, Gwer East, Konshisha, Kwande, Makurdi,Ogbadibo, Ohimini, Oju, Otukpo, Tarka, Ukum and Vandeikya. Ortom secured a total of 285,734 votes in the 12 local government areas; representing68 per cent of the total votes APC used in winning the election.

Whereas, Tarzoor of the PDP accumulated total votes of 166,010 in the remaining 10 out of the 23 local government areas of the state. This represent 53 per cent of total votes APC amassed in the state. The LGs are Ado, Agatu, Apa, GwerWest, Katsina-Ala, logo, Obi, Okpokwu, Ushongo and Guma which is the very hometown of APC’s governorship candidate, Smamuel Ortom.

Gboko, Gwer East, Gwer West, Makurdi, Tarka, Guma and Buruku local government make up Benue North West Senatorial district. Votes polled in the district showed that APC with 150,355 votes had dominance over PDP who polled 96,770 owing to 39 per cent of the total votes. 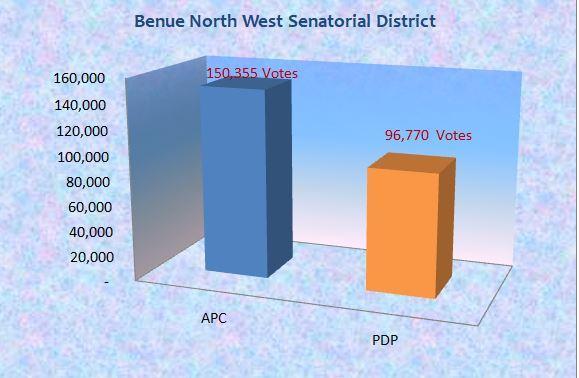 The 2019 Benue State Governorship Aspirants of the APC and PDP

The seemingly entrenched godfather of Benue politics, George Akume, a senator and former Governor of the state, had infiltrated APC leaders in the State Executive Council, and has firm control of the state party that would deny Ortom APC ticket in 2019. Without hesitation, Samuel Ortom pitched to PDP to jostle for the primaries.

Ortom polled 2210 votes to emerge winner ahead of three other aspirants; John Tondo 475 votes, Felix Atume 44 votes and Paul Orhii with 10 votes. The chairman of the Benue State primary election, Mrs Zainab Maina announced the result in Makurdi. In all, 3,748 delegates participated in the primary, which was held at the Aper Aku Stadium in Makurdi, the state capital.

A former Managing Director, Nigeria Export Processing Zones Authority (NEPZA), Emmanuel Jime, won the APC governorship ticket for the 2019 general elections in Benue.All other five aspirants for the governorship slot—Akange Audu, Asema Achado, Michael Iordye, Titus Zam and Benjamin Adanyistepped down for Jime. The chairman of the governorship primaries in the state, Mutiu Are, declared Mr Jime winner after the affirmation of the yes votes by those who were in support of Mr Jime’s candidature through voice vote.

Speaking at the occasion, George Akume, leader of the party in the state, commended the aspirants for their decision to endorse Mr Jime as their candidate and said with his emergence, the party was sure to wrest power from the PDP in 2019.

The governorship candidate, Jime who was born on June 20, 1962 said the state had fallen into the tragedy of a failed government and regretted that those entrusted with the task of providing security, welfare had become treacherous accomplices.He assured of running an issue-based campaign devoid of bitterness and desperation. “We will serve our people and not use brute force to coerce them,”he pledged.

The herdsmen-farmers clash in Benue and the rising insecurity is making Governor Samuel Ortom’s chances of retaining power in 2019 look slim. The issue of unpaid salaries is also a major factor that can spur Ortom’s 2019 chances. However, his smart move to PDP may yet give him another opportunity to retain the governorship seat in 2019.

Would Ortom have another opportunity to govern Benue again, but this time under the flagship of the PDP?