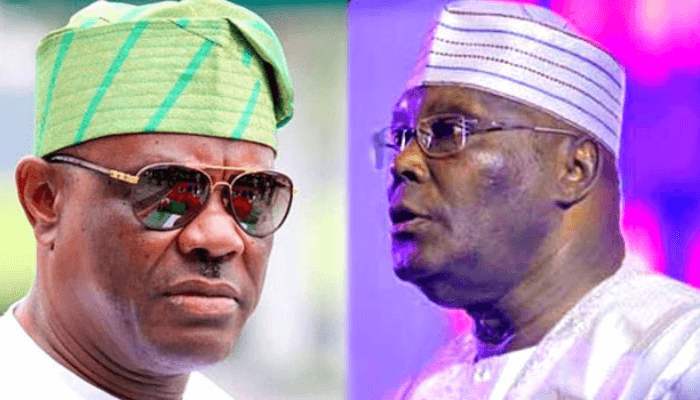 Nyesom Wike, governor of Rivers State was conspicuously absent on Wednesday when the presidential candidate of the main opposition People’s Democratic Party (PDP) Atiku Abubakar met with the 2023 presidential aspirants of the party at his Asokoro residence in Abuja.

However, others in attendance at the meeting includes; Dele Momodu, Mohammed Hayatu-Deen, Tari Oliver, and Charles Ugwu.

At the meeting, Atiku commended them for accepting the outcome of the convention that produced him as the PDP flag bearer, and for not raising the dust.

He promised to work with all of them ahead of the 2023 general elections, adding that they have various roles to play in his victory at the polls.

In his remarks, Gana said they were in Atiku’s house to congratulate him and to assure him of their support as well as commitment toward ensuring that he wins Niger State.

Gana also disclosed that the on-going reconciliation between Atiku and Wike is yielding success.

The crisis in the PDP started shortly after the presidential primary, Wike after losing the presidential ticket was bitter with the manner the primary was conducted by the leadership of the party.

The issue further aggravated when the Rivers State Governor was snubbed by Atiku, preferring to pick Governor Ifeanyi Okowa as his running mate.

The decision was in disregard to the recommendation of Wike as running mate by the special PDP selection committee.

Read also: 2023: Why I picked Okowa as my running mate; Atiku

With the ensuing controversy and failed attempts for reconciliation, the disagreement has been threatening the unity of the PDP ahead of the presidential elections slated for February next year.

Recently, after several failed attempts by his emissaries to resolve the issue, Atiku personally met with Wike and his ally abroad, Governor Seyi Makinde of Oyo State, Okezie Ikpeazu of Abia State, and Samuel Ortom of Benue State.

Wike has stated his demands for reconciliation, among which is the removal of the national chairman of the party, Iyorchia Ayu, but it is increasingly looking difficult for compliance.

Speaking some days ago in Umuahia during a project commissioning, a disaffected Wike said he would flog his political enemies ‘pepperly’ in the 2023 elections.

Wike had reacted to a comment by Governor Okezie Ikpeazu advising him to leave all the perceived political wrongs against him for God.

The Rivers Governor said he would never leave anything for God.

According to Wike,”God has given me what it takes for me to crush my enemies; I’m going to flog them pepperly.”

Also since Atiku’s emergence, different blocs in the party, especially Southern leaders had repeatedly protested and insisted that it was the turn of the region to produce President Muhammadu Buhari’s successor.