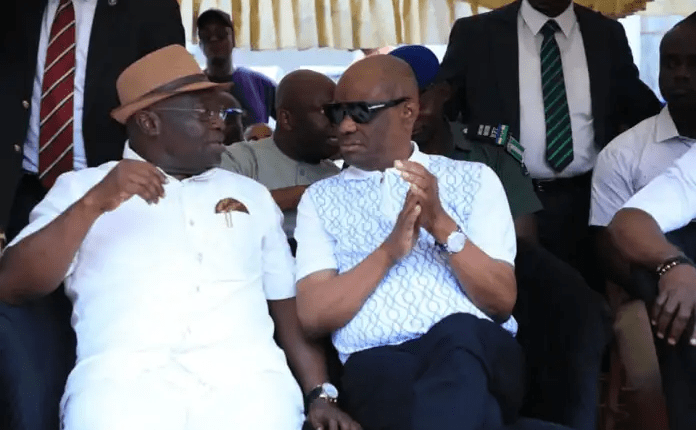 Governor Nyesom Wike of Rivers State has threatened to expose certain individuals who surreptitiously stopped the release of loans from the Central Bank of Nigeria (CBN) to Abia and Benue States.

Wike alleged that the motive was to punish Governors Samuel Ortom and Okezie Ikpeazu for standing with him to demand for the resignation of the national chairman of the People’s Democratic Party (PDP), Iyorchia Ayu.

The Rivers State governor spoke at the 58th birthday celebration of Okezie Ikpeazu, in his country home of Umuobiakwa community in Obingwa Local Government Area of Abia State, on Tuesday.

Wike, who was the special guest of honour at the event, was accompanied by Ayodele Fayose, former governor of Ekiti State.

“I will tell all of you, how Abia and Benue States were denied of their money that every state had gotten from the Central Bank of Nigeria (CBN).

“I got it (CBN loan). And anybody who dares to stop my money, they know, I will not take it from them. You can see how people are wicked, they are not in office yet, but they are fighting people, stopping states’ money.

“Even as we have criticised President Muhammadu Buhari, he has never stopped our money any day, never.”

Wike frowned at some Nigerians who always carry on as if they are masters over others, and would stop at nothing in daring to treat people as slaves.

The governor stated that nobody can treat him as a slave because, as a Nigerian, he has equal citizen’s status like every other Nigerian.