Welcome Biden, but caution is urged 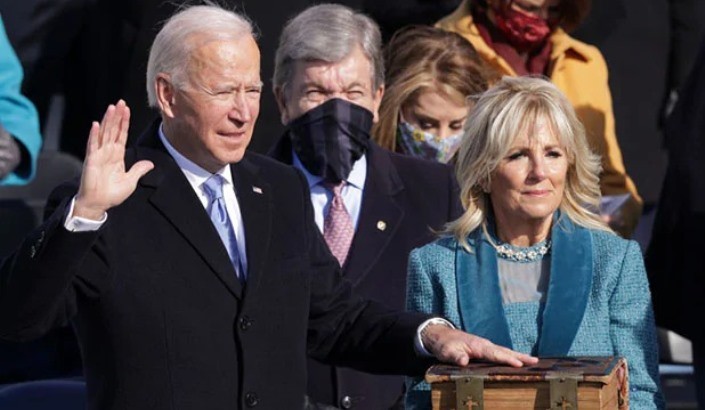 Since Wednesday, January 20, 2021 there has been celebration and relief in the United States of America as Joe Biden, the new president, assumes office.

For many, especially supporters of the new president, the respite is not just because of the optimism and excitement experienced at the coming of every new administration, but the fact that the new president has truly started work, even from his first day in office.

So far, Biden has reversed key policies of Donald Trump, the former president, he has issued executive orders on some national emergency and international issues and promised to issue more.

Though Trump reversed some of the policies of Barrack Obama, a former president, when he took over the leadership of the country, it seems Biden is in a haste to reverse even more and probably, do away with ‘anything’ Trump.

“There’s no time to waste. These are just all starting points”, Biden said before signing executive orders in the White House on Wednesday.

But as the US is jubilating over the ‘working president’ and his feats so far, some concerned observers think that there should be caution in the reversals as the Trump administration may have had some good policies that need to be continued by the present leadership.

“The reversals are fulfillment of some of Biden’s campaign policies, but I think there is danger in the haste with which they are being executed”, lamented Ferdinand Okpe, a Nigerian immigration lawyer, who maintains a family in Atlanta Georgia.

According to him, the US immigration laws under Trump were firmed to protect the country from invaders, terrorists, fraudsters, and security threats, while the trade war with China was meant to ensure balance of trade, tariff and to curb economic sabotage.

Speaking further, he noted that there may have been gains from some of the policies, especially little or no terrorist attacks in Trump’s administration, curtailing of Iran and North Korea excesses and trade war aimed at balancing international trade with China, which is working to surpass the US as the world’s largest economy.

In the same vein, Ehua Iredia, a Nigerian medical doctor in Michigan, USA, and a supporter of Biden, expressed optimism over Biden’s ability to lead America to greatness, but he noted that despite Trump’s many shortcomings and excesses, the country was peaceful and respected by the world on the ground that Trump would not tolerate any nonsense from any one or country.

“Truly, Trump was feared across the world. He was not a president to toy with; it is just that some of the unpopular policies worked against him, especially the immigration laws and the poor handling of Covid-19 pandemic. Less Americans would have died from the pandemic instead of the number today if Trump was proactive, cooperative and combatant in the fight against Covid-19,” Iredia said.

But as a supporter of Biden, as well as many other supporters, Iredia noted that the new president would be criticised, even more than Trump, if his administration does not live up to the electorates’ expectations.

Reviewing the 17 executive orders and presidential actions, which Biden signed Wednesday, after his inauguration, especially the reversal of travel ban, a Trump’s policy, which Biden described as discriminatory and an affront to the country’s values, some observers fear that the number of reversed policies is going to be very high and unprecedented in the history of the country because of Democrat’s long battle with Trump.

They also think that with the reversals, the US is now open once again to the world and feared security challenges rising again as the country is now for all comers.

“I think President Joe Biden should have waited and engaged some stakeholders on the modalities for lifting travel ban; now it is going to be an all-comers affair as the world will be heading to the US once again with all their baggage, despite the rising unemployment and the impact of the pandemic on the US. I hope he consults on the US-China trade war,” Hugh Anderson, an American expatriate in Lagos, said.

Anderson explained that though the US is a democratic country that guarantees the freedom of every citizen, the country also has right to protect its citizens, the country’s infrastructure and national security with relevant policies, which may not favour non-Americans.

“I have travelled across the world and there are some countries that are very difficult for visitors; from visa, resident permit, tough immigration laws, to intimidation of foreigners, such countries justify their action on the ground that they are sovereign nations and have right to formulate policies in line with their national interests. So, if the US immigration policy does not favour you, stay back in your country or governments should try and develop their countries to make their people stay back,” Anderson said.

He thinks that Biden will do well in the early part of his first term, but issues will definitely crop up to test his resilience and commitment to America.

“Of course, we are in a very challenging world today and issues will crop up. By the time terrorists strike, or China challenges us in all fronts, Americans will remember Trump. What is happening now is expected,” he said.

Some others think that there should be continuity in government despite the differences of the political actors, parties and that good policies should be supported no matter who formulated them.

“The good thing is that the US is bigger than any politician or interest, hence there is need to give priority to the country by ensuring that good policies are formulated and implemented. But the reverse may be the case as the main actors now are coming with a mindset, which is a new development and a dangerous one in the US politics,” Iredia said.

For Okpe, who has been following the US elections in the last 30 years, Biden knows the forbidden areas and will support already existing policies in such cases.

“Issues like sanctions on Iran, the China debate, Russia and North Korea meddling have always been given priority by any American administration. I see Biden supporting polices of Trump in such issues”, Okpe said.

However, some observers think that the reversal might just be in word, to claim that campaign promises are being fulfilled, while in action, there might be little adjustments to some of the good policies of Trump.

“Politicians will always be politicians and the media, like CNN did, will always support who they want for obvious reasons”, Okpe concluded.

Already, President Biden had, before the inauguration, appointed a 39-year-old Adewale Adeyemo, who was the first president of the Obama Foundation, as the United States Deputy Secretary of the Treasury; a 26-year-old Osaremen Okolo, who hails from Ewohimi in Esan South East Local Council of Edo State, as his Covid-19 Policy Advisor. Okolo is a graduate of Harvard University and a former Senior Health Policy Advisor in the US House of Representatives, and Funmi Olorunnipa Badejo who he appointed as White House Counsel.

Political Analyst, Adeola Adeoye says that the Biden administration can help Nigeria with technical support on containing the spate of insecurity in the country, reviving the economy and guiding President Muhammadu Buhari on ending human rights violation.

“We are hopeful that we will have a good working relationship, when the Nigerian government changes their tactics and begin to respect the rule of law, and also bring justice, equity and peace back to the country. US President Joe Biden can help Nigeria with technical support on containing insecurity, reviving our economy to path of development, and guide President Buhari on ending violation to human rights,” he said.

According to him, “The lifting of ban on Nigerians entering US is positive news for all Nigerians, I will also want President Joe Biden to remove Nigeria from list of terrorism. This is why I said the President should work with Buhari and keep guiding him.

“America has the capacity to help us end insecurity, remember when they came to rescue one of their citizens abducted, it was a seamless operation. All the terrorists, who have remained invincible all these years, can be tracked with sophisticated technology and bring them down; also there must be operational synergy between US and Nigeria in combating crimes and terrorism.

“Looking at Nigeria, the biggest help we need now is how to end insecurity that has stayed for too long with us, every part of Nigeria is now occupied by insurgents. Before now, it used to be predominant in the Northern Nigeria, but Oyo State, Ondo State and other South Western states are now struggling to end banditry, kidnapping and all sorts of crimes; the US can help with manpower and technology to protect our citizens.”

“Another key area the US President can help Nigeria is in the areas of trade exchange and transfer of technology. Our youth population needs to be engaged, as one sure way of slowing down crime rate,” he further said.

Ayo Kusamotu, a lawyer and political analyst, said that Biden has a huge task of uniting a divided country, trying to heal the wrong of the Trump administration, adding that he expects an improvement in US-Africa and Nigeria trade relationship because Biden knows Nigeria very well.

“I expect Biden to try and heal the country and bring them together; black or white. He should bring them back to the world as their democracy has taken a back seat under Trump. He knows Nigeria very well because he has been there, more than even Barack Obama,” he said.

“I expect an improvement in US Africa trade relationship, we hope that would translate to trade and formidable policies to the continent and Nigeria, especially as it concerns everything; I believe his policy for Africa would be good,” Kusamotu said.

Saraki and his controversial visit, counsel to Jonathan